I’m back from vacation and embarking on the Herculean task of catching up with Writer Beware business, including this blog. Ann has also returned, but family matters will be keeping her busy for a little while, so I’ll be holding the fort here.

My husband, Rob, and I spent our vacation with my brother Konrad and his family in Keystone, Colorado. My sister-in-law Brenda is an ace organizer and bargain hunter, and she was able to arrange a home exchange with the owners of a luxurious condo. We stayed in style at 9,600 feet (took us about 24 hours to get more or less acclimated to the altitude), and spent ten fabulous days hiking (to 13,000 feet–absolutely spectacular views, but a serious lung-buster for us flatlanders), biking, horseback riding, and whitewater rafting. The weather was perfect–temps in the upper 70’s during the day, pleasantly cool at night, thunderstorms threatening in the afternoons but all but one day free of substantial rain–and it was great to spend time with Konrad, Brenda, and my niece Chloe. A gorgeous, fun time that seemed to fly by in a heartbeat.

Returning home, I left Rob to get back to work (it’s great being self-employed) and hooked up with Ann and her husband Michael, who were traveling around the Northeast on a camping vacation and had arranged to pass through our area. They whisked me off to sunny Cape Cod, where we stayed in a charming shingled cottage and crammed many activities into two-and-a-half days, including sailing out on a whale watch. We tracked a group of six or eight humpback whales; sometimes we were as close as twenty feet, and in one case two of them swam right under the boat. What a thrill! Afterward, we poked around Provincetown, and Michael took a nice picture of me and Ann in front of a house with an art-filled garden (that thing that seems to be rising out of my head is a mosaic snake). 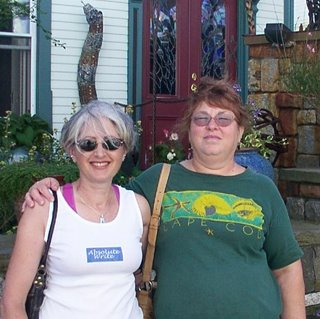 Ann and I didn’t neglect Writer Beware business. We discussed proposals for a couple of articles we plan to write, and Ann, who has never visited my house before, got to stand in my office, a.k.a. the nerve center of Writer Beware, and look through the hundreds of files that fill a five-drawer file cabinet and two large Rubbermaid containers (Robert Fletcher’s Sydra-Techniques/ST Literary/Stylus Literary, about which we’ve received more advisories and complaints–by a factor of at least ten–than any of the other agencies or publishers we’re tracking, has a Rubbermaid all to itself).

– Martha Ivery, a.k.a. Kelly O’Donnell, who in December 2005 pleaded guilty to 17 counts of fraud and perjury in connection with her scam literary agency/vanity publisher, was scheduled to be sentenced on August 14th. However, her sentencing has once again been pushed back, due to a request from her attorney for time to compile a psychological report. We’re hopeful that this will be the last postponement.

– The infamous Melanie Mills, a.k.a. Elisabeth von Hullessem and several others, who on February 10 was sentenced to time served on five charges (including first-degree battery and aggravated assault) and deported back to Canada, sent us a cease-and-desist threat as a result of our ongoing series of posts about her. Per our usual procedure, we didn’t respond, and have heard nothing further. FYI: she’s now calling herself Remmi Mills or R.E.M. Mills (Raswitha Elisabeth Melanie Mills).

– Capital Literary Agency, formerly American Literary Agents of Washington Inc., is also doing business as Washington Literary Agency. URL’s and website verbiage differ, but the upfront fee is the same ($250), and the Capital/ALA contract is virtually identical to the WLA contract, including a couple of distinctive features (such as a contract term of just 180 days) not found elsewhere. We’ve updated the Twenty Worst List to reflect the change.

– Probably as a result of the recent judgment against her, the supposedly judgment-proof Cris Robins of the Robins Agency has decided to come clean on her website and admit she charges $3,250 upfront.

That’s great, and we approve. What we’re not so thrilled about is the tangle of falsehoods with which she has garlanded this confession. Among other things, she claims that “other agents…will charge you on a monthly or quarterly bases [sic] for their expenses” (actually, reputable agents will let expenses accrue and deduct them from your advance–i.e., you won’t have to pay a penny out of pocket–or else bill them to you as and after they’re incurred); that such expenses typically include “travel expenses and overhead for their office” (bzzt–wrong again–reputable agents don’t expect their clients to bear travel or overhead costs); and that such expenses “can add up to $4,500 to $6,500 per year” (only if you’ve got a scam agent. Expenses incurred by real agents who are actively submitting usually top out at a few hundred dollars).

By contrast, here’s how the Robins Agency works. “Instead of giving you a surprise bill, or nickel-and-dimming [sic] you throughout the contract, we simply charge an annual retainer of $3,250 with a commission rate of 10%-15%. As this is paid at the time you sign on with us, there are no bad surprises, no unexpected bills, no phone calls asking for more money. Yes, we are expensive and we are worth it. More importantly, YOU are worth it.” Gosh! Just like the L’Oreal ads! Although that’s certainly appropriate, since the Robins Agency is as genuine as hair dye.

Oh, and one more thing: Cris touts the “editorial review” that each manuscript receives “to make sure it is in the best shape it can be,” but neglects to mention that this will cost the client a couple of thousand dollars extra.

There you have it: all the “scam” news that’s fit to print–for the moment. And now I’ll get back to answering the Writer Beware email that has built up in my absence. If you sent me a letter between August 5th and 20th and are waiting for a reply, thanks for your patience, and you’ll hear from me soon.