In early 2021, as part of a post about several troubled small presses, I wrote about mounting problems at New York-based Adelaide Books, as evidenced by an increasing number of author complaints about delays, poor editing, terrible communication on the part of Adelaide's owner, Stevan Nikolic, and lagging royalty payments.

Also problematic: Adelaide's extra-contractual demand for a book purchase as a condition of publication, royalties paid on net profit, and a seriously overstuffed publishing schedule that even a large house with a big staff (neither of which describes Adelaide) might have trouble managing.

The problems at Adelaide have only expanded since, leading to a Watchdog warning from the Alliance of Independent Authors and the establishment of an Adelaide authors' group on Facebook where authors have been sharing their experiences, including their largely fruitless efforts to get Nikolic to respond to questions about delays and mistakes, queries about royalties, requests for rights reversion, and more. Most recently, Adelaide authors have been enraged to discover that Nikolic and his wife (for whom Adelaide Books is named) are living not in the US, as they believed, but in Portugal, where they run a large and well-stocked bookstore that was the subject of several glowing news articles in 2022 (the articles, which describe Adelaide Books as having "expanded" to Lisbon, do not mention any of the publisher's difficulties).

EMP Entertainment no longer appears to be active (it has no website and I've heard nothing about it since 2020), but A&D is still going strong, and over the past two years I've been contacted by a lot of (mostly very young and inexperienced) writers who are confused about its complicated English-language contract, or have changed their minds after signing up and want to know how to get free (as with the contracts of so many serialized fiction apps, there's no option for the author to terminate).

A&D recruits via a bait and switch. Writers are solicited by an editor or Author Liaison who claims to have discovered the writer's work on Amazon or elsewhere, and invites them to publish on the Webnovel platform (the bait).

The Copyright Claims Board, the new tribunal for small copyright claims in the Copyright Office, started accepting claims last June 16. As of January 11, there have been 281 claims filed (plus seven so far in 2023.)  Of those filed, there have been 145 orders from the Board dismissing the claim, 84 amended claims, and 16 opt-outs.

Significantly, there have only been eleven Scheduling Orders – cases declared active by the Board - most within the last month. This is the first step in a case after the claimant has successfully jumped through all the hoops necessary to follow the Board’s procedures (including paying the full $100 fee.) The order schedules a timetable for the next steps, starting with the respondent’s response to the claim.

Things move slowly at the Copyright Clearance Board, but that’s actually the way it was designed. Both claimants and respondents have plenty of time to act, and, at least theoretically, everyone should have enough time to take the actions that are required of them in the process. 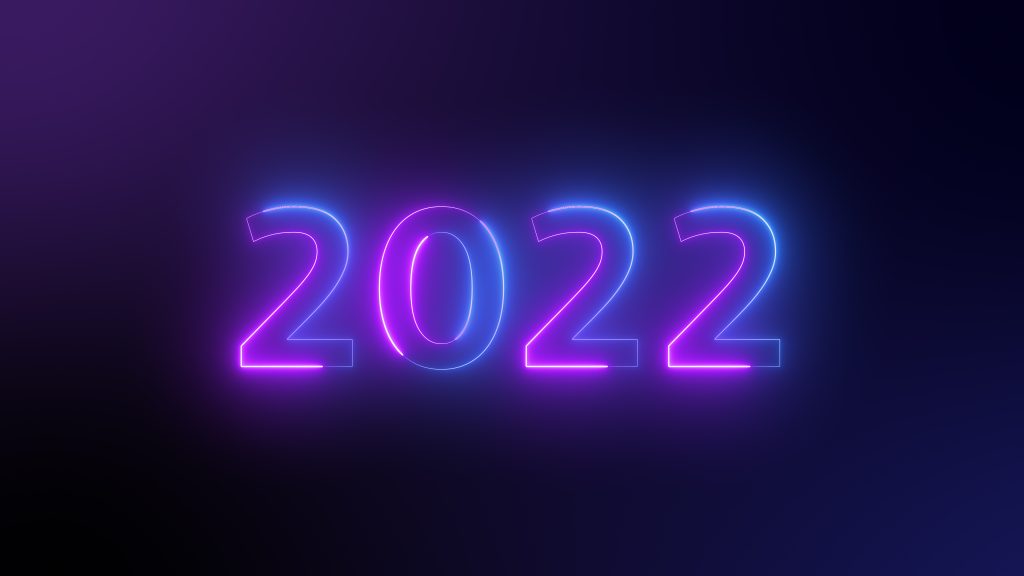 As 2023 gets underway, it's time again for Writer Beware's annual look back at all the schemes, scams, pitfalls, and publishing industry craziness we covered in 2022.

A New Home for the Writer Beware Blog: After many years, Blogger (our previous home) finally got too small for us, and we transitioned to Wordpress. How that came about--and the benefits thereof.

Some important publishing industry initiatives kicked off in 2022. 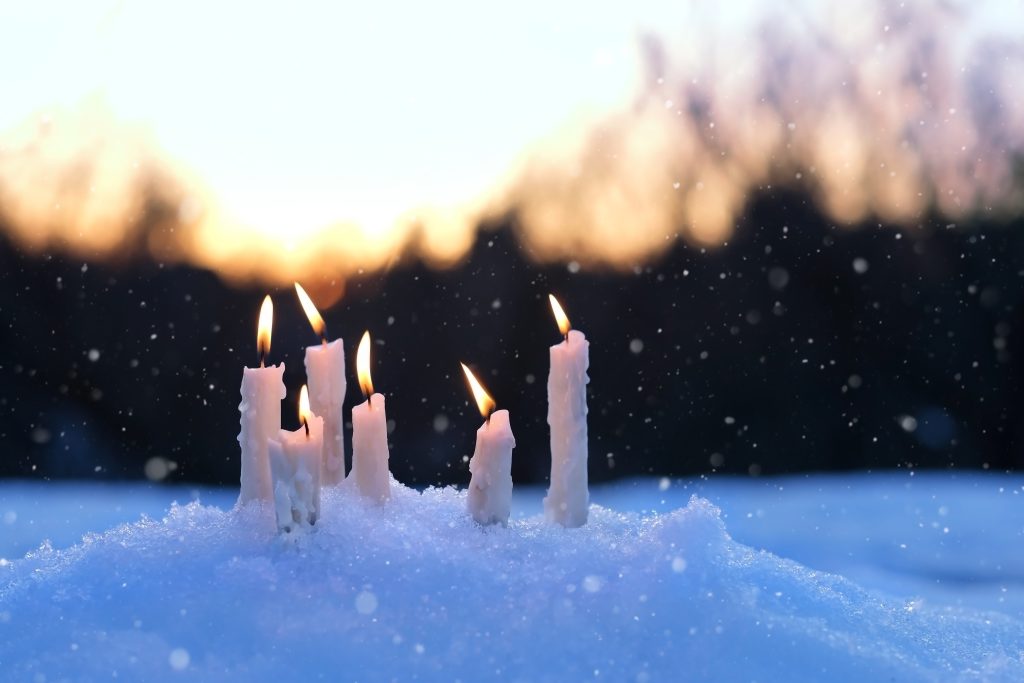 I can't believe it's the end of another year--where did the time go?

From Michael, Rich, and me, best wishes for a healthy, safe, and joyful holiday season, however you choose to celebrate it. Heartfelt thanks, also, to the many readers, writers, and industry professionals who share their stories with us and help to spread the word about Writer Beware. We couldn't do it without you.

We'll see you in January! 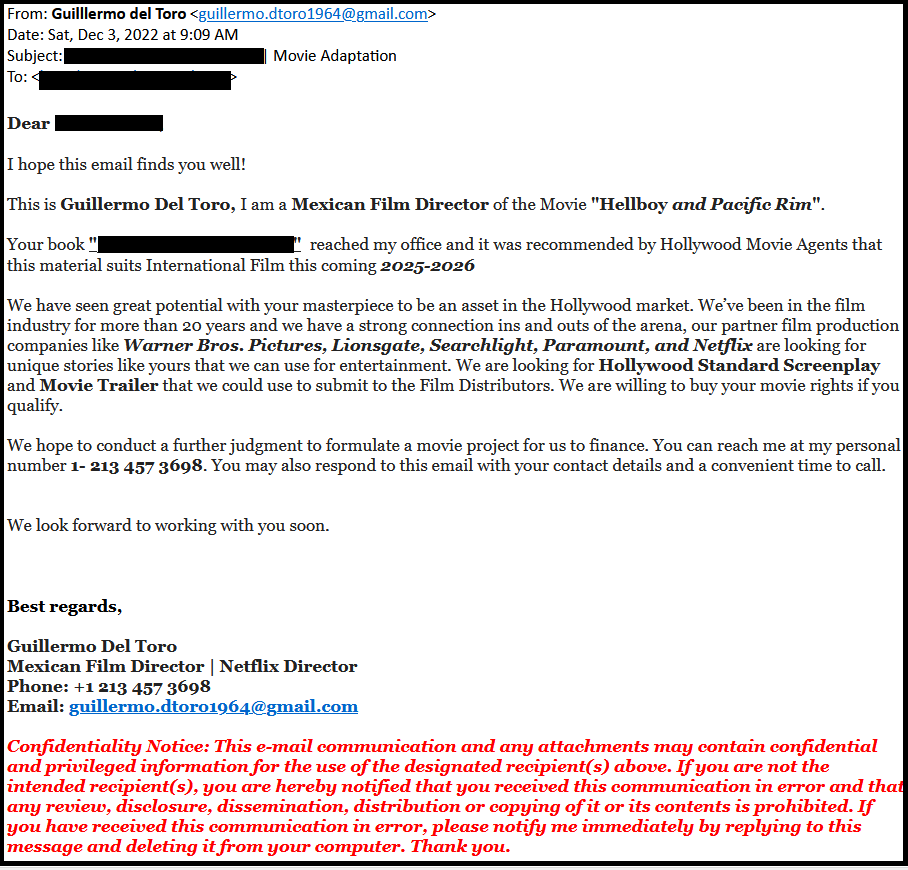 If a rash of solicitations over the past few months are to be believed, there's a major rush down in Mexico to acquire film rights to books.

These virtually identical emails are, of course, laughably bogus--from the peculiar capitalizations, to the anonymous "Hollywood Movie Agents", to the implausibility of these supposed directors bollixing up their own movie titles, to the unlikelihood of famous film folks personally soliciting authors via funny-looking Gmail accounts--but they have been briskly doing the rounds since this past summer, and I've collected quite a trove of them thanks to the many authors who've sent them to me.

Obviously a scam, in other words. But what's the endgame?

Overseas scams are aggressively soliciting self-published and small press writers. For a full list of the more than 150 companies Writer Beware has identified to date, click here

The Writer Beware website is a comprehensive source of information and warnings about bad practice in the publishing industry. We cover literary agents, publishers, editors, and more

Impersonating Agents: A New Face For an Old Scam

A Pay to Play Bookstore Scheme: The Reading Glass Books