As we sat back down in the Syracuse Federal Court, I studied the judge assigned to the case. He was perhaps in his early 60’s, regular features, a full head of graying hair, quite fit looking. His expression as he stared down from his high desk at Martha and Mr. Mott made me very glad that I was not on trial in his court. To say that his countenance was stern would be a vast understatement. At one point he looked out over the almost empty courtroom, and when his gaze crossed mine, I was instantly reminded of every legal transgression I’d ever committed…the funny ciggies back in the late 60’s, my speeding ticket a year ago (the first in over a decade, she said defensively…all of it flashed through my mind. I can’t imagine what it was like for Martha, with her double-digit record of felonies, to meet that gaze. I have a good imagination, but I couldn’t imagine this man smiling and playing with grandchildren.

After the formalities of stating the indictment and the plea were taken care of, Martha’s attorney, Richard Mott, rose and asked the judge to declare a hearing before passing sentencing. Mr. Mott pointed out that the two mental health professionals who had examined Martha Ivery arrived at different conclusions: the defendant’s psychologist claimed that Martha was so mentally ill that she was incapable of determining right from wrong, whereas the prosecution’s psychiatrist claimed that Martha was mentally competent, and that, furthermore, her tests showed evidence that she was lying about her condition.

Mr. Mott was thus asking the judge not to sentence Martha that day, but to agree to a hearing where each mental health professional would be heard and the judge could rule on whether Martha was mentally capable of determining right from wrong. The judge fixed Mr. Mott with a steely gaze and asked Mr. Mott, was he saying there were errors in the facts of the case? Mr. Mott admitted that the facts remained unchanged, but he said that the different opinions should be heard. The judge disagreed and said so. Mr. Mott fell silent.

Paul and I glanced sideways at each other, thinking “YES!” because this was something we’d been worried about. We were glad the judge saw it our way.

Next the judge asked if anyone was there who wanted to speak before sentencing was passed. I’d been coached by Paul, and knew that this meant were any of Martha’s victims present. The Assistant US Attorney stood up and said that the Victim-Witness Coordinator had brought statements that victims wished to be read before the sentencing was passed. The judge asked whether these documents were the same ones he had read, and the Assistant US Attorney said that the judge, Mr. Mott, and the representative from the Bureau of Prisons had all received copies of them. Mr. Mott objected to the statements being read. The judge responded curtly that he had read the statements before the hearing, and saw no reason for them to be read again. He did, however, order them to become part of the official record.

I had written one such statement myself, and I was tickled, because it was now going to be considered part of the official record. Yay!

I glanced surreptitiously at the clock hanging near the door of the courtroom. It was edging on towards 4:30. The judge looked straight at Martha and asked her whether she wished to say anything before he pronounced sentence. Martha and her attorney stood up, and she began to speak.

Martha began by saying that she really cared about “my writers” and wanted only the best for them. She said she wanted to make restitution to them, and to help them. She went on in this vein, talking about how much she cared about “my writers,” for perhaps three or four minutes, kind of rambling about how she’d never intended to harm anyone, and wanted the best for them. Surprisingly, she didn’t apologize or say, “I’m sorry” in any way. (Maybe her lawyer had told her not to? Because it would be admitting guilt? But she’d already pleaded guilty…) She didn’t break down, but the conclusion of her apologia ended by her invoking “Our Lord Jesus Christ.”

Coming from the woman who had gotten a lot of victims because she claimed to be “Christian” and to be looking for authors of “Christian and spiritual books” this went right over the top, as far as I’m concerned. The judge probably didn’t know about this, but the irony certainly wasn’t lost on Paul and me. We carefully did NOT look at each other during Martha’s little speech.

After she stopped speaking, there was a pause. Both Martha and Mott remained standing as the judge fixed Martha with that look that would have reduced me to quivering jelly. Then the judge started in, and it was plain from his first words to Martha that he wasn’t buying it. He mentioned her double-digit rap sheet, and said he was certain that Martha did indeed know right from wrong, and committed fraud against her victims quite knowingly. He used words like “manipulated” and “machination” to describe how she had treated her victims.

Finally, the judge coldly ended up telling her that, mindful of her “shenanigans” he hereby sentenced her to 65 months in Federal Prison, plus three years probation. He ordered her to report for incarceration on January 9th 2007. The judge also ordered her to make restitution to her victims in the amount of 10% of her income, or 100 dollars a month, whichever sum was greater. Regarding the mental health issue, he announced that he was ordering her to have mental health counseling and substance abuse counseling, while in prison and on probation.

I have to hand it to Martha. She bore up under this news, which was certainly harsher than they had hoped for (they’d hoped she’d receive only probation). She didn’t break down.

The judge then exchanged a few words with the Assistant US Attorney and the gentleman from the Bureau of Prisons, regarding some of the materials (manuscripts, etc., I suppose) that had been seized during the FBI’s search of Martha’s office and home. He asked for a memo detailing what the prosecution wanted him to order regarding them.

Court was then adjourned.

Paul and I waited while Martha, her husband, and Mr. Mott left the courtroom, heading for the US Marshall’s Office to be instructed on where to report, etc. I sure didn’t want to run into her in the hallway. Even though she gave no sign that she knew I was there, I’m pretty sure she knows what I look like – my picture is on my website.

After he had gathered up his documents, the Assistant US Attorney (a good-looking youngish gentleman who wouldn’t have looked out of place in one of those lawyer shows on television) came over to shake hands with Paul and me. He thanked us again for our work on the case, smiling this time, and saying that he thought justice had been done. He was very happy with the sentence, he said, which, I gathered, was a pretty major sentence for white-collar crime.

Paul and I walked over to look out the huge window, and saw the city lighting up. Darkness had fallen. The Christmas tree in the plaza blazed with colored lights, and skaters glided and twirled around the little skating rink beside it.

After we left the courthouse, Paul and I walked to a little nearby place and had something to eat. It had been a long time since breakfast. When the server brought our drinks, (he had water, because he was driving, I had a beer) we solemnly clinked the glasses together and then smiled.

The next day, Paul took me into the FBI Field Office in Albany and I met many of the people who had taken an interest and even helped out with the case. The one I knew was the FBI Victim-Witness Coordinator, Dorothy Copeland, a very nice lady that I’d talked to many times over the years. Dorothy was the person I referred victims to when they turned up. She’s a very caring lady. 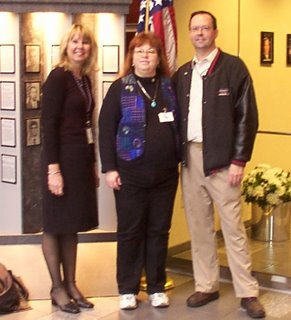 Before I left the Albany FBI Office to catch my plane home, Dorothy, Paul and I all posed for a picture in the lobby of the FBI Building. I’m the one in the center.

Ann C. Crispin, co-founder of Writer Beware® and Chair of the SFWA® Committee on Writing Scams, became active in SFWA® in 1983. She served as Eastern Regional Director for almost ten years, and as Vice-President for two more. With her husband, two-time SFWA® President Michael Capobianco, she was a 2004 recipient of the SFWA® Service Award. Her more than twenty novels include the best-selling Han Solo Trilogy; New York Times best-selling Star Trek novels Yesterday’s Son, Time for Yesterday, and Sarek; the original series Starbridge; and her final novel, Pirates of the Caribbean: The Price of Freedom. Her many freelance credits include articles in Writer’s Digest and the SFWA® Bulletin. Ann passed away in 2013, but her tireless work with Writer Beware® stands as an enduring legacy.