VANITY PUBLISHING AND PAY TO PLAY

Here are eight words you never want to hear from a publisher that is considering your manuscript for publication:

“How many books are you planning to order?”

Many writers are aware that it’s a major red flag when a publisher’s contract includes a clause requiring authors to buy their own books, or to commit to some kind of sales guarantee. Since an outlay of cash is a condition of publication, this is vanity publishing–what we at Writer Beware call “back-end” vanity publishing, since you’re buying into the end of the publication process (finished books) rather than the beginning (paying for the book to be produced).

One example: Black Rose Writing, which recently moved from just asking about authors’ purchase plans, to actually including a purchase requirement in its contract.

Stealthier back-end vanity publishers rely on pressure and encouragement, rather than contract clauses, to get authors to purchase their own books. They may produce “author manuals” that extol self-purchases with promises of huge profits, or employ “publicists” whose sole job is convincing authors that buying their books for re-sale is essential to success, or offer frequent special deals and discounts (buy 50 books, get 10 free!) to make self-purchases as attractive as a sale on canned soup at the grocery store. Since inexperienced authors may not know a lot about how publishing is supposed to work, they can be easily ensnared by this kind of deception.

Still other publishers that focus on author self-purchases are well-intentioned amateur efforts run by people who have no professional publishing experience, little or no financing, and, often, no concrete business plan. Because of their lack of capitalization and marketing expertise, it’s very tempting for such publishers to settle into a business model where they rely on their authors as their principal customer base and sales force. This creates a closed loop, in which published books are marketed mainly to the books’ creators–all but eliminating the publisher’s risk, and even, possibly, guaranteeing a small profit. It’s this kind of publisher that’s most likely to ask you the question with which I began this post, rather than surprising you with contractual purchase requirements or bombarding you with special offers post-publication–since its intentions are basically benign, and it’s not consciously trying to deceive or screw you.

Intentions aside, the author is the loser in all three of these scenarios. A publisher that relies on its authors as a main or major source of income is considerably reducing–if not entirely removing–its incentive to market and distribute the books it publishes. Why should it bother trying to sell books to the public, when it can turn its authors into customers? Why should it expend money and effort on getting books into the hands of readers, when it can persuade writers to function as an unpaid sales force, buying their own books and then re-selling them?

In each case, the publisher is failing to do what publishers are supposed to do: get books out into the world. While it’s certainly true that authors nowadays are expected to self-promote, the self-promotion an author can do and the marketing a publisher should do are two different things–and without your publisher’s active marketing and distribution support (I’m not talking here about writing press releases or getting books listed on Amazon), you have very little platform on which to build your self-promotion efforts. You’re likely to wind up in much the same position as if you’d self-published–except that you’ll probably have a more restrictive contract, a less professional product, and, in the case of the more unscrupulous back-end vanities, a considerably smaller bank account.

So if a publisher asks you about your plans for buying your own book, be on your guard. Even if the publisher isn’t obviously a vanity, even if it assures you that it’s only collecting preliminary data and declares that your answer will have no bearing on its decision, the mere fact that it’s thinking about author self-purchases at this early stage of the game is reason enough to move on.

UPDATE 7/21/13: Black Rose Writing now says that it no longer requires its authors to buy books, and has sent me a sample contract that does not include a book purchase clause. I’ve received emails from authors confirming this, and there’s also confirmation in the comments on this post. Nevertheless, the general caution applies: if a publisher asks you whether you plan to buy your own books, be on your guard.

UPDATE 9/12/19: Although Black Rose has removed the book purchase requirement from its contract, it has found other ways of extracting money from its writers. Newly contracted authors receive a copy of Black Rose’s Cooperative Marketing Catalog, which lays out a smorgasbord of pay-to-play marketing and promotional services. Here’s a sample: 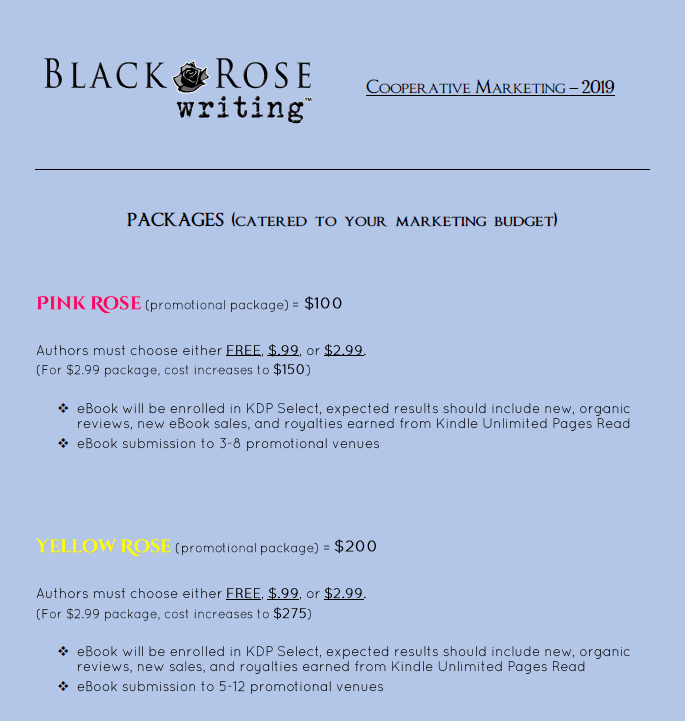 You can view the whole catalog here. Worth noting: there’s no mention at all of fee-based services on the Black Rose website, which claims that authors are “paid traditional royalties without ever paying any fees to be published.”

To be fair, the a la carte listings (which include things like Kirkus Indie reviews and placement on NetGalley) don’t appear to upcharge and even offer a small discount. The packages, however, do look like moneymakers for Black Rose. In any case, most of what’s on offer are things that other publishers–even very small ones–do for their authors free of charge, as part of the publication process.

This really is the very definition of back-end vanity publishing. It may be optional, in that it’s not contractually required–but how likely is it that writers who choose not to pay will get much (if anything) in the way of marketing support? Recruiting writers with free publishing and then pushing them to buy services is exactly the strategy used by the late, unlamented PublishAmerica (a.k.a. America Star Books), which “didn’t charge to publish” but bombarded authors with (entirely worthless) pay-to-play promotional offers. When you consider that Black Rose’s founder published his own book with PublishAmerica back in the day, and that the Black Rose contract is heavily based on the old PublishAmerica contract (believe me, not a good thing), the similarity doesn’t seem so coincidental.