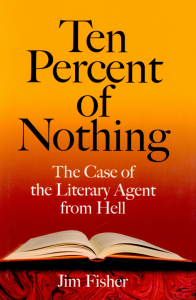 Whether or not you’re interested in literary scams, former FBI agent Jim Fisher’s Ten Percent of Nothing makes for fascinating reading. It’s a true-crime account of the Deering Literary Agency/Sovereign Publications scam, which flourished during the 1990s and cheated hundreds of writers out of thousands of dollars. To date, the Deering scam is one of the very few that has attracted the attention of law enforcement, and has resulted in jail time for the perpetrators. (There’s more info on the Deering scam on the Case Studies page of Writer Beware.)

In the years since the Deerings plied their deceptive trade, technology has changed, but the methods–and the psychology of the victims–hasn’t. Below, author Marian Perera provides a review of a book that should be required reading not just for authors, but for anyone in the publishing industry.

(Check out Jim Fisher’s website as well–there’s an interesting segment on publishing scams.)

A review of Ten Percent of Nothing: the Case of the Literary Agent from Hell

“I’ve built my publishing company by helping unknown authors and first-time authors fulfil their dreams. I will help you!”

This is the story of a fake literary agent, a fake publisher and a real nightmare – for the writers who were bilked.

Dorothy Deering was behind one of the most infamous literary scams, and is even more noteworthy because she was actually brought to justice. I read Jim Fisher’s book about the scam and the case which brought it down, Ten Percent of Nothing: The Case of the Literary Agent from Hell, and found it fascinating. Any writer will be able to use the information in it – the tactics employed by the Deering Literary Agency in 1994 are the same as those scammers use today.

Deering started out as a writer who couldn’t get published, but after being taken for a ride by a fee-charging agent, she may have decided that there was more money in that particular game. She opened her own fee-charging literary agency and later set up a vanity press into which she funneled her own clients.

Fisher provides a meticulous accounting of the various schemes that brought in the money, how much of it they produced and how they eventually folded, one by one. Deering’s inventiveness was outdone only by her greed. In 1996, her vanity press, Sovereign Publications, charged a “standard author’s contribution” of $6125. Within a year, Sovereign Publications took over a million dollars from writers, and in the same year, the Deering Literary Agency bled writers for a further four hundred thousand.

All of the details and figures are extremely readable because they’re balanced with the human element, the writers involved and the psychology behind the con.

Just having an agent made him feel like a real writer. He liked that feeling. Now when people asked him about his new book, he could say that his agent was shopping it around to publishers. This part of being a writer was the most exciting.

The story is both insightful and heartbreaking. At one point, I longed to be able to tell a writer not to do it, not to trust the agency to the point where she wrote out another check to them. Nothing was too small or too sacred to be used as an opportunity for solicitation: after Deering’s son was murdered, she asked for donations to a memorial college fund. And her knee replacement surgery was an ongoing excuse for why Sovereign wasn’t publishing books.

With short chapters and an brisk, engaging style, the story unfolds almost as rapidly as Deering’s house of cards eventually did. Fisher also shows why law enforcement is often slow to react when it comes to literary fraud. When an FBI agent called Clay Mason did the research, though, he found that Deering had deliberately defrauded writers rather than just being a poor businessperson.

In Mason’s interview with her, Deering painted herself as a victim to the (replaced) bone, and explained that when she claimed to be related to William F. Morrow, writers drew the wrong conclusions. You know how imaginative writers can be. Her stock answers were that she either didn’t recall or that she had represented so many clients that she couldn’t be expected to remember specific claims she had made to individuals.

Deering divested herself of all responsibility, saying that as an agent she was obliged to pass all offers on to her clients, even those from vanity presses. So it wasn’t her fault if the clients signed up. There’s a semi-happy ending to the precedent-setting case, though, since she eventually pleaded guilty and was sentenced to 46 months in prison. The writers’ money was long since spent.

This book chronicles the glory days, the deceit and the downfall of the various literary scams that Dorothy Deering ran. It’s a wrenching story told with both facts and clarity, the story of a scammer who sold the dream of publication and the writers who paid for it.

Marian Perera studies medical laboratory technology when she isn’t writing, or blogging about writing. Her debut novel, Before the Storm, is a fantasy that combines steam engines and a steamier romance.

American Author Contest (or, Why Writers Should Use Craigslist With Caution)

Lie Down With Dogs, Get Up With Fleas