I’m writing this in my local Panera, which is one of the few places where I can power my computer just now. Here in Massachusetts, we are still suffering through the after-effects of the massive Snowtober storm, and after four days I still don’t have power at home. And it has been COLD. And my friends are in the same boat, so no shelter there.

I feel like a hobo right now, migrating from place to place in search of warmth and electricity. This morning I was at the gym (hello, hot shower). When I’ve dawdled as long as possible over my second mug of Panera tea, I’ll move on to the library at the University of Massachusetts. After that, home to my dark, chill house, which at noon was actually colder inside than out. It may be Thursday or Friday before power returns, but my fingers are crossed that when I get home tonight I’ll see the porch light on. Wish me luck.

At any rate, this is a little late for Halloween–but today’s post is about zombie literary agencies…agencies that die only to rise again and lurch out onto the Internet in search of writers’ brains. More specifically, it’s about one zombie agency, which is attempting to eat brains under two zombie identities.

A few weeks ago, I began getting questions about the Franklin-Madison Literary Agency. Never having heard the name before, I did some research. What I found rang warning bells. From the creepy image of what look like conjoined twins on the opening page, to the badly-written text, to the absence of any substantive information on the agency and its staff, Franklin-Madison offers an impressive collection of red flags.

Franklin-Madison also gave me a strong sense of deja vu, both in some of the qualities of its website and its Washington, DC address. But none of the writers who contacted me mentioned fees, and domain registration information (which can sometimes provide important data) wasn’t helpful–so even though I had a strong hunch about which zombie agency had created Franklin-Madison as a zombie clone, I couldn’t prove it.

I’ve finally received a copy of the Franklin-Madison contract and intake correspondence. Neither, of course, contained any (obvious) mention of Zombie Agency, and crucial aspects of the contract differed from Zombie Agency’s (a term of 360 days rather than 180 days, for instance). The upfront fee was the same, though ($150 for US submissions, or $250 for US plus overseas submissions). More tellingly, Zombie Agency failed to cover all its tracks.

Here’s a screenshot of the first page of the Franklin-Madison contract (click for a larger view):

Note that it’s a pdf document. The file name (Franklin-Madison_Agency_Agreement-signed-1.pdf) is consistent with the contract’s heading. But see what happens when you access the File menu, and click the Document Properties link: 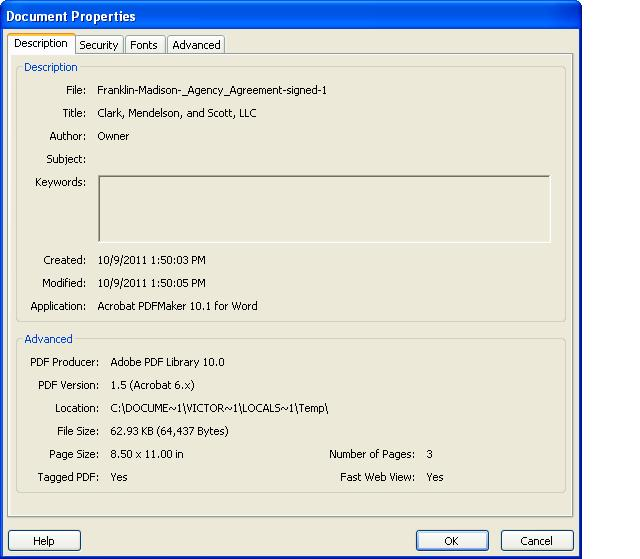 Franklin-Madison’s creator has forgotten to remove Zombie Agency’s toe tag–i.e., the document’s title, which is Clark, Mendelson, and Scott, LLC.

These companies–about all of which Writer Beware received many complaints–were run by a guy named Samuel C. Asinugo out of Washington, DC from the late 1990’s until around 2008, when Asinugo was found guilty of forgery. No doubt remembering how easy it was to eat writers’ brains, Asinugo raised his fee-charging endeavors from the dead as soon as he was able, first with Clark, Mendelson, and Scott, and now with Franklin-Madison Literary Agency.

Possibly this zombie clone is a result of my blog post–which I know Asinugo knows about, since he (under an alias) sent me a legal threat. On the other hand, Asinugo may simply be attempting to diversify in an attempt to snag more victims. With all the semi-sleazy self-publishing companies and dodgy small presses out there, the brain-eating business is a bit more competitive than it used to be.

So there you have it: Zombie Agency times two. Because where there’s one, there are always likely to be more.