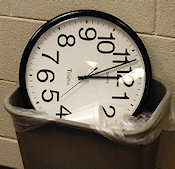 A stopped clock is right twice a day. A dodgy publisher is right…well, less often. But sometimes.

I’m thinking of one publisher in particular–about which Writer Beware has gotten a LOT of complaints–that advertises itself by claiming that it pays 50% royalties. That sounds impressive, right? Except that what the big print giveth, the small print taketh away.

If you’re unlucky enough to get an offer from Dodgy Publisher (and just about anyone who submits does), the contract reveals that the 50% isn’t quite what you may have expected. It’s actually 50% of what’s left over after printing costs have been deducted from “the sale price.”

Bad enough to have printing costs taken out. But what writers who aren’t familiar with dodgy publisher-speak may not realize is that “sale price” doesn’t mean list price, but the publisher’s net income–the money it actually receives from retailers and distributors, which, because of discounting, may be as little as 40% of list. (This is what’s known as a net profit royalty–and it’s not a good thing.) So instead of getting $7.50 on the sale of each of your $15 books, you might actually receive as little as $1 ($15 x 40% = $6, less $4 for printing = $2 x 50%).

Not exactly what you were dreaming of.

Many authors, unfortunately, don’t read their contracts carefully enough, or don’t recognize the misleading terminology, or are just dazzled by the hype. I recently heard from an author who was convinced that Dodgy Publisher had breached his contract because it had paid him a royalty of around $1.75 on a $15 book–rather than the $5.50 he believed he was due (50% of $11, assuming a $4 printing fee).

His assumption, of course, was that the royalty calculation would always be based on list price. But the books had been purchased from a major online retailer. When he contacted the staff at Dodgy to demand that they pay the full 50%, they gave him quite a reasonable explanation of wholesale discounts and net income. He wasn’t prepared to accept this, though–not only because of his confusion about the meaning of “sale price,” but because he was certain that “wholesale” meant “purchased in bulk,” while these books had been bought one at a time.

So he wrote to me. I had to explain to him that Dodgy Publisher–which had taken advantage of him in plenty of other ways–was actually having a stopped clock moment: its explanation was entirely correct, and although its contract terminology was deliberately confusing, there was no breach. It was painful to take Dodgy’s side, but in this case I had to do it.

Writers are a cautious (not to say paranoid) bunch. But I often see them worrying about the wrong things. My correspondent became incensed when he believed his royalty payments were being shorted, but apparently had no problem with Dodgy’s print cost deduction. I also often hear from writers who are distressed about perfectly reasonable contract provisions–such as the standard list of author warranties–yet overlook really heinous language, such as a perpetual option on future works, or royalties that are cut in half for sales at standard wholesale discounts, or the absence of a reversion clause in a life-of-copyright contract.

It’s so important not just to read and understand the fine print (my mantra), but to constantly pursue knowledge about writing and publishing (while always being discriminating about the source) so you’ll know how to properly evaluate the opportunities (or pitfalls) that come your way. The more you know, the better armed you will be against Dodgy and its ilk.

When a Writing Contest Has a Hidden Agenda

Publishing Industry Terms and Contracts: Some Resources, and Some Advice