Readers of this blog may remember The Albee Agency, a so-called PR firm run by one Mike Albee, which posted fake testimonials from well-known authors and was outed by me and others. Read the whole story here.

Well, it wasn’t too long after that shitstorm of negative publicity that Albee disappeared. However, like many con artists who pull up stakes when their deception becomes too widely known, he couldn’t kick the habit. Selling high-priced services of dubious value to inexperienced writers who can ill afford them is just too easy and lucrative to resist!

So, sporting a shiny new website and a new business name, Mike Albee has reincarnated as Sandpiper Publicity.

How do I know this, you may ask? Well, Sandpiper’s website is not identical to Albee’s. But it shares many of the same red flags: a claim of years in business contradicted by the website domain’s February 2013 creation date; claims of media contacts and success with no specifics; campaigns that rely on cheap (for Sandpiper) and/or spam PR methods (with fees, based on documentation I’ve received, in the $2,000 range); and zero verifiable information about staff.

That’s not conclusive, of course. The Internet is littered with dishonest and amateur PR firms that charge a premium for services that are worthless or that authors could easily accomplish themselves.

But as sometimes happens when dodgy businesses engage in name-changings-of-convenience, Mike forgot to keep his deceptions straight–or assumed that no one would put two and two together. Here he is, connecting himself to Sandpiper Publicity: 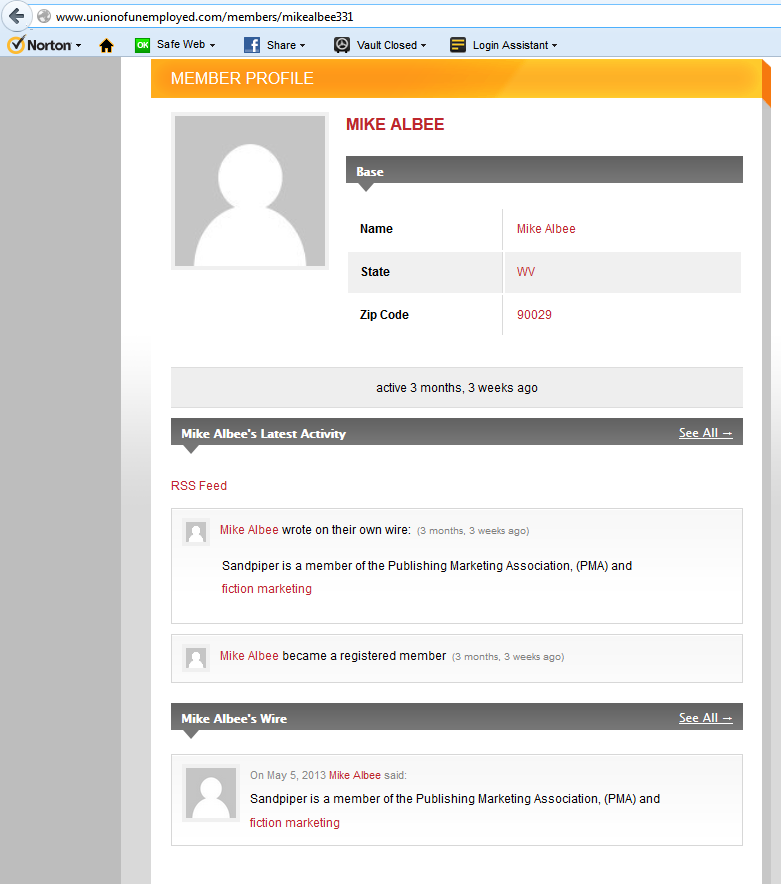 Adding these indications of unprofessionalism to the warning signs I listed above, there’s plenty of reason to be wary of Sandpiper Publicity–even if it weren’t run by a man with a history of deception.

Thanks to Dan Smith of Smith Publicity for the tip (Smith details his own run-in with Mike Albee, who apparently plagiarized much of Smith’s website, here).