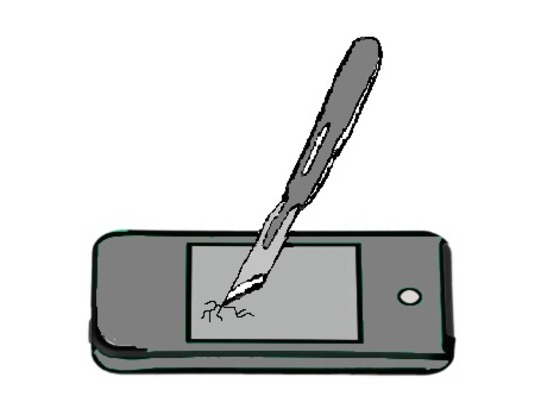 Here at Writer Beware, we love the weird stuff–the nutty, fring-y, even, dare I say, totally freaking insane things that are always cropping up at the boundaries of the publishing world, often spawned by people who haven’t really taken the time to think things through.

So…playing now on Kickstarter, a project called Story Surgeon (I’ve embedded a screenshot at the bottom of this post to immortalize the concept). Created by aspiring author Ryan Hancock, Story Surgeon is:

An eBook notation app that saves your personal edits as a separate file, and can be shared with anyone who owns the original eBook.

In other words, Story Surgeon is an app that enables anyone to alter a published book in any way they like, and spread the alterations around at will.

Although it will be a complicated app to develop, the idea is simple. Buy an eBook in ePub format and download it to your iPad. Download the Story Surgeon app. (It will be free on release day and probably many days thereafter.) Then you can use the app to read the original eBook (booooring) or make your own person [sic] changes to the text. (OH YEAH!)

Use the “find and replace” tool to substitute bad words, cut out whole portions of the book you thought were lame, or completely rewrite the novel with you as the main character.

Once your filter is perfect, you have the option to upload it into Drop Box and post your link on the Story Surgeon General Blog. (As we grow we’ll get our own servers and streamline the sharing process.)

The filter is kept separate from the eBook and no copyrights will be infringed upon. Anyone who uses your link and downloads the free filter will have to have purchased the original eBook. Filters will always be free.

As an author, I’m so very relieved to know that even if random people use an app to create altered versions of my books and post links to them on the Internet, my copyright won’t be infringed upon. I’m also thrilled to know that there’s a new promotional tool at my fingertips:

For authors, making fun filters of your already published book is a great way to generate buzz and get more people purchasing the eBook.

As yet, Story Surgeon exists only in Ryan Hancock’s imagination–which is why he’s trying to raise $15,000 on Kickstarter, offering backer rewards that are, if possible, even loonier than the app itself. For instance, if you donate $10, you can “submit the titles of TWO books that you would like to seen [sic] “PG-ified”—OR—If you’re not interested in having books cleaned up, you may instead submit a filter idea. (Such as Hunger Games rewritten with Harry Potter characters, etc.)”

Or, for big spenders who are willing to cough up $200, “the app creator will completely rewrite a book of your choice (up to 600 pages), making major changes such as genre switches, adding you as a completely new main character, or adding your boss as the villain’s simpering sidekick. You will also receive a signed copy of his YA novel when it is published.”

Hancock explains the genesis of his misguided idea on his blog (apparently it’s all Patrick Rothfuss’s fault). He has also issued a press release, in which he reiterates his woefully inaccurate view of what constitutes copyright infringement, launched a Facebook page, and is promoting his project on Twitter (which is how I heard about it, thanks to a tip from a literary agent. Moral of story: if you’re planning on promoting copyright infringement, don’t follow publishing people).

Story Surgeon’s Kickstarter has been live for about a week, and as of this writing has raised $170.

ADDENDUM: I really didn’t expect this post to generate so much discussion (see below for links to some of it, and see also the comments section). I’ll admit that when I wrote it, I was only peripherally aware of apps and software for re-editing/re-mixing video. If I’d been more familiar with these, I might not have been quite so hard on Mr. Hancock’s concept.

A number of responses to this post have argued that Mr. Hancock’s app isn’t infringing, since all it does is allow readers to create a series of edits for private use. However, that doesn’t diminish my concern about what people may do with those altered versions. Whatever Mr. Hancock’s intentions for his app, he can’t control the actions of his users–and while it may not be infringement for people to privately create filters to change the books they read and how they read them, it _is_ infringement if they then find a way to circulate those altered versions.

I’m going to quote here from one of the comments on this post, because I think it states the problem very precisely:

“But there’s a further wrinkle, and this is where I suspect matters become more dangerous. The kinds of substitutional texts Story Surgeon will generate strike me as scarily similar to texts that have been labeled as plagiarism by both fannish and professional observers. Let me give you three names: Cassie Claire (Harry Potter fanfic and a Pamela Dean novel); Kaavya Viswanathan (teen author who sold a novel to Little, Brown that was pulled shortly after its release); and Cassie Edwards (a now-notorious name among pro romance authors).

So to my mind, even if Mr. Hancock’s app and the filters it generates are legal and non-infringing, they present major potential for infringing use.

EDITED TO ADD: Thanks to one of the comments on this post, an interesting article on how–maybe–pastiche-creating software might skirt copyright laws.

EDITED AGAIN TO ADD: This post has led to several additional posts about Story Surgeon. Chris Meadows points out its similarities to programmed re-editing software, and suggests that Story Surgeon may constitute fair use. “Even if making fan edits of books was illegal, template or not, the app would seem to have plenty of non-infringing uses.” Nate Hoffelder argues flatly that I’m wrong, and that Story Surgeon “is not copyright infringement any more than taking a pair of scissors to a paper book and then explaining online how to duplicate your efforts.” Mick Rooney delves into the moral ambiguities, questioning whether Ryan Hancock has missed a crucial point: “We buy what we like, what we identify with—not what we want to peer over the garden wall at, tease ourselves with, and then decide how we can best sanitise it for the joy and pleasure of others.”

EDITED YET AGAIN TO ADD: Here is Ryan Hancock’s response to my blog post. “Despite the heated opposition, I believe this app to be legal and what’s more, to be of benefit to authors and families in particular.”