Readers of this blog may remember Mike Albee of the infamous Albee Agency PR service, who filled his website with fake testimonials from well-known writers and allegedly plagiarized another publicist’s website to create his own. Outed by me and others, Albee showed up a few months later as Sandpiper Publicity, peddling the same spam-style PR “services” (heavy on the email blasts and press releases and social media postings). 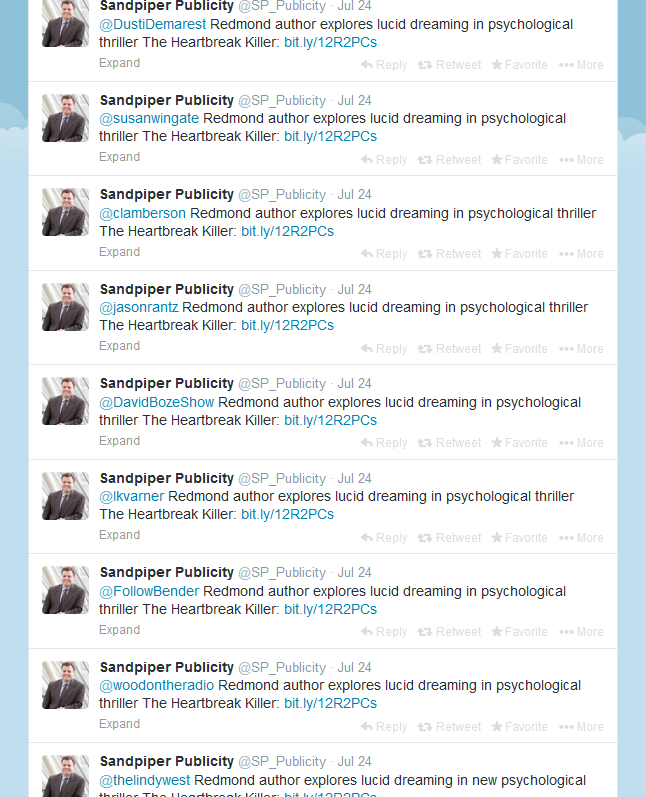 Unlike the Albee Agency website, which vanished soon after Albee was exposed, Sandpiper is still active. However, for whatever reason, Albee has reincarnated yet again, this time as Magnus Publicity, which bills itself as “a worldwide leader in public relations.”

How do I know that Magnus is Albee in yet another disguise? Have a look at this screenshot (click to enlarge).

The proposal comes from Magnus Publicity, but see the URL? It belongs to Sandpiper Publicity.

There’s also this (the screenshot was taken in mid-October 2013; Albee has since switched Magnus to a different name server):

And there is also my correspondence with Thomas Wictor, the author for whom Albee prepared the proposal in the first screenshot, who provided me with a lot of documentation that unambiguously confirms he was dealing with Albee the whole time.

Wictor has written about his nightmarish experience with Albee and Albee’s wife, Lura Dold, to whom he paid in excess of $25,000 over a period of several months (including double billings). I’ve also heard from another very unhappy Albee client, Elliott B. Oppenheim–who, $8,000 poorer, documents his experience here. Oppenheim told me he intends to sue if he can figure out how to serve Albee.

In keeping with Albee’s history of…interesting…claims: When I first encountered the Magnus website, it claimed to be “a solid, five-year member of the Independent Book Publishers Association” (despite having no apparent existence prior to August 2013, when its domain was created). But when I contacted Terry Nathan, IBPA’s COO, he confirmed that Magnus Publicity was not, in fact, an IBPA member at all. Subsequently, that claim vanished from the Magnus website, but it can still be found in various places online, such as here:

As I pointed out in my previous posts about Albee, there’s plenty of reason to beware PR services like Sandpiper and Magnus even if they aren’t run by testimonial-fakers under multiple names. Red flags include claims of substantial experience with no way to verify them; claims of media contacts and PR success with no specifics; campaigns that rely on cheap (for the service) and/or spam PR methods; and zero verifiable information about staff. Reputable publicists and PR companies provide specific, confirmable information about staff, credentials, and campaigns, and don’t use email blasts and social media spamming as the cornerstone of their services.

Thanks to Dan Smith of Smith Publicity for the two screenshots connecting Sandpiper and Magnus.

ISNI: An Authority for Authors?