Every time I consider purging Writer Beware’s files to get rid of documentation on agents and others we haven’t heard anything about in years and years, I’m reminded of why I hold onto that old paper.

Last Friday, I received an email from successful independent editor Jodie Renner. Apparently, client testimonials from her website had been plagiarized by an outfit called WordWorks Publishing Consultants.

I hopped on over to WordWorks’ website, expecting to discover something on the order of faux publicist Mike Albee, who decorated his site with fake testimonials from known authors.

What I found was way more bizarre: plagiarism, plagiarism, and yet more plagiarism, plus a blast from Writer Beware’s past. (Bear with me; this is a long post with lots of images, but I wanted to capture them in case WordWorks attempts to hide the evidence.)

Based in Alabama, WordWorks is owned by Pamela Wray Biron, who provides “Expert and Innovative Content Solutions,” including editing, ghostwriting, graphic design, illustration, marketing, and web services. A veritable Renaissance woman. And, gosh, just look at Pamela’s clients! The US Justice Department! 20th Century Fox! The President of the United States! Check out the impressive names on Pamela’s Testimonials page! Steve Jobs! Bill Gates! Michael Eisner! Editorial and marketing staff from all the Big Five publishers!

There’s just one problem: most of the testimonials are plagiarized, and not just from Jodie Renner.

For instance, this testimonial from Jodie’s client SJ Sellers:

Here’s Pamela’s version, with names changed to protect the guilty:

Pamela has made hay with this one, turning it into three testimonials: 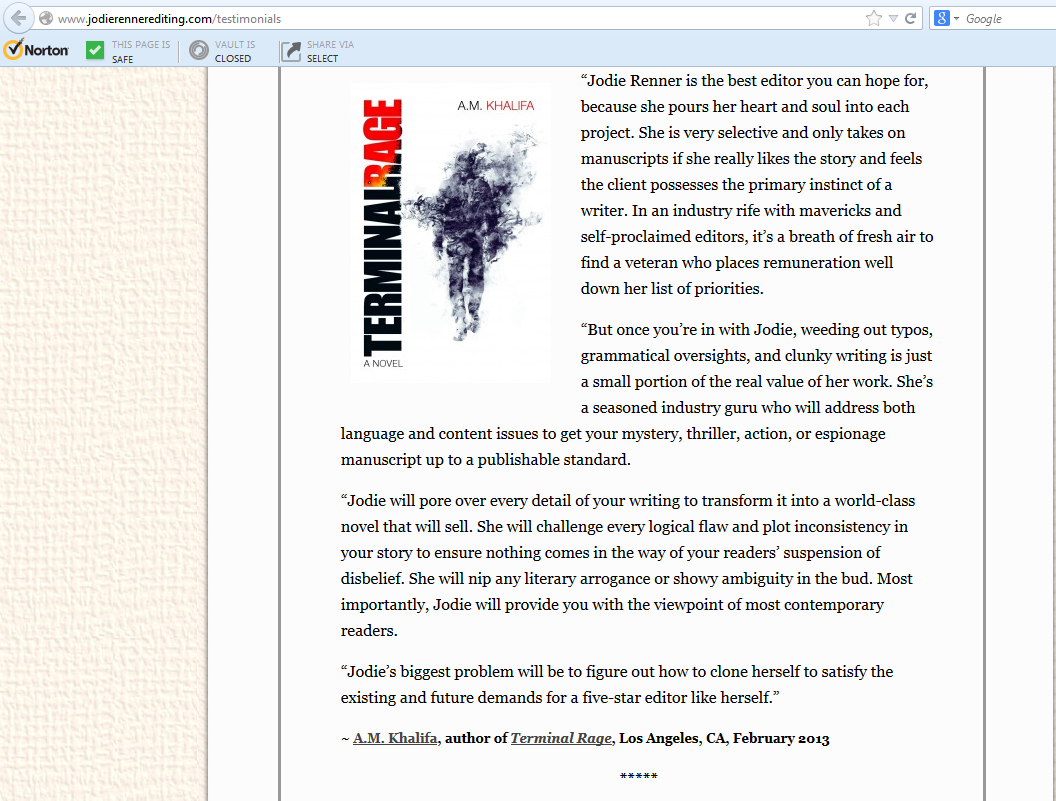 Here’s a testimonial from the website of Charlie Neville, graphic designer:

Pamela’s version, slightly paraphrased (but oh dear–she forgot to change “his” to “her”):

A testimonial from Foster Covers, the website of book cover designer George Foster:

Pamela’s got this one too:

These are just a few examples; I confirmed many more. And that’s not all. See Pamela’s Portfolio! (Its lousy reproduction values don’t match the high-powered jobs she’s claiming–if you’re working for Paramount, surely you can spring for something better than a crappy Vistaprint website–but never mind). See Pamela’s poster for the hugely successful horror movie Drag Me to Hell! 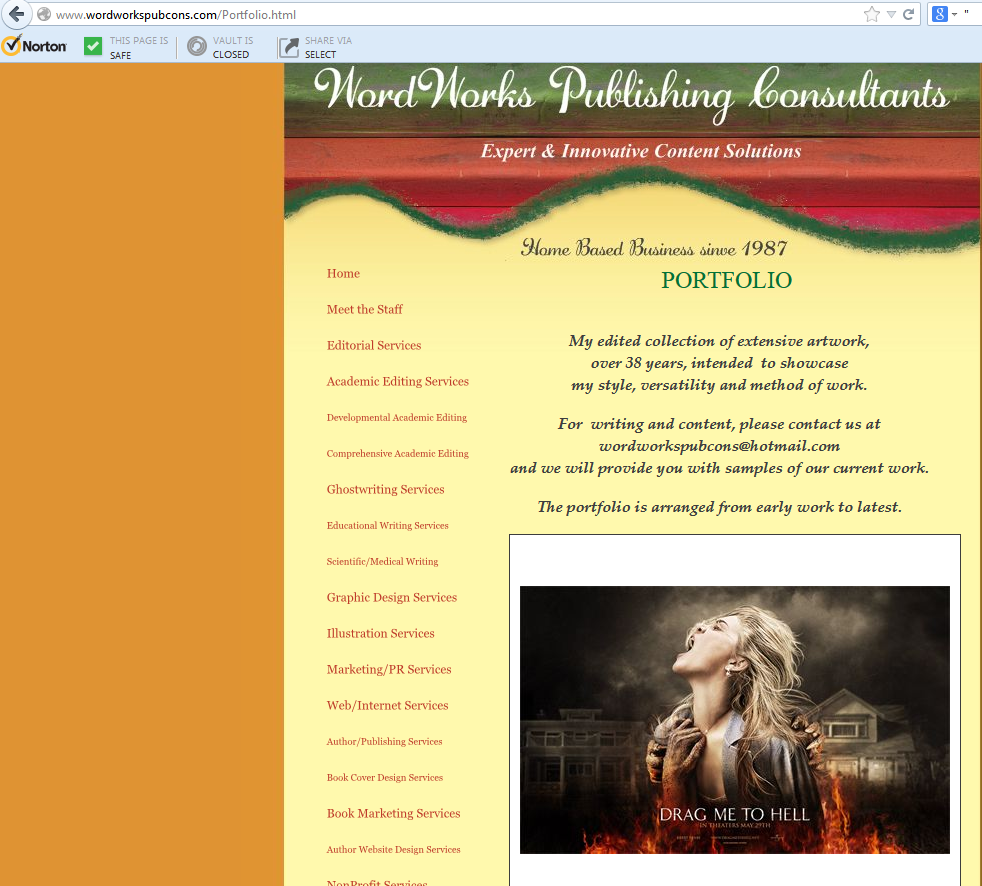 Pamela’s writing samples don’t exactly belong to her, either. For instance, “Excuses Alcoholics Make,” which can be downloaded from the Social Sciences section of her Writing Portfolio page, has been lifted whole from this article by Floyd P. Garret, M.D. Perhaps, if asked, Pamela would claim she ghostwrote it–but I suspect that might surprise Dr. Garret (though he’d surely be no more startled to find his words on Pamela’s website than would Michael Eisner or Bill Gates).

But wait–there’s even more. Pamela’s also the founder and Executive Director for the The Lighthouse for Recovery Ministries, which is dedicated to easing incarcerated persons’ transition back into society. A worthy mission–but since WordWorks is so extensively plagiarized, inquiring minds can’t help but wonder…could Lighthouse’s website also include, well, borrowings?

Sure it could. Large portions of Lighthouse’s Transitioning for Ex-Offenders have been copied, with adaptations, from Butler University’s Returning Students resource. Barriers to Employment and Overcoming the Barriers have been taken in their entirety, without attribution, from Chapter 8 of a publication from the Substance Abuse and Mental Health Services Administration. Pamela’s blog posts for Lighthouse are also plagiarized. Even Lighthouse’s mission is not its own; a big chunk of it has been borrowed from the nonprofit Fortune Society.

Believe it or not, I’m not done yet! As I was undertaking the research above, the name Pamela Wray kept ringing a bell. I went back through Writer Beware’s records, and…bingo. We have a file.

Back around 2000, Pamela was running the Pamela Wray Literary Agency. She came to our attention initially because she was falsely claiming SFWA membership. A couple of cease-and-desists later, Pamela removed the claim–but over the next year or so we were contacted by a number of unhappy clients who reported that, in addition to never managing to sell their books, she’d told them various fibs, including presenting herself as John Grisham’s agent (supposedly he was planning a new series featuring a Southern female detective, and wanted a Southern female agent), claiming to have secured bookstore orders for manuscripts that hadn’t yet been placed with publishers, and claiming that publishers required authors to “match their out-of-pocket consumer promotion budgets”.

By 2001, Pamela was out of the faux agent game. But though she has moved on to other things, she still seems to be working from the same playbook.

And that’s why I don’t throw away my old files.

UPDATED 6/30/14 TO ADD: WordWorks Publishing Consultants is gone. But The Lighthouse for Recovery Ministries remains, complete with plagiarized content.

In an amusing twist on this story, I recently received an email from Pamela letting me know that THE WHOLE THING WAS A HOAX! That’s right, folks–and not just any hoax, but one in furtherance of a noble goal. I’ll let Pamela tell you about it. Link to her entire explanation is here.

Thank you for contacting me and letting me know that you finally realized that the submission for the website “WordWorks” was falsified….It was part of an experiment for a study and journalistic investigative reporting pieces on ACCURACY AND USE OF INFORMATION ON THE INTERNET. This is the resulting “blog” about the results.

Two years ago, we were part of a grant study under the Department of Education, to determine the (1) accuracy, integrity and validity of information that is dissimulated on the internet; and 2) if individuals do in-depth research on this information to determine whether the data is true or false or if the individuals take the information at face value without further research….

We created a “false” business website with a “kernel of truth” and expounded on its informational value with plagiarism, untruths and creativity on a weekly basis to see how long it would take at least one individual to question the information provided within the website. It took sixteen (16) months before someone “spoke up.” This was sixteen months of this website being used as resource for term papers, research papers, business reports, and case studies by individuals in the corporate world and in the academic world.

EDITED 7/23/14 TO ADD: An alert reader passed this on to me: Pamela Wray’s profile at Crimestoppers of Metro Alabama. According to this, she’s wanted for identity theft, and has previous convictions including theft, fraudulent use of credit card, and possession of a forged instrument.

The Short Life and Strange Death of Entranced Publishing

How to Succeed in Authorship Without Really Trying