KISS Library has been shut down. Scroll down for updates.

I’ve gotten several alerts over the past week about a pirate site that’s new to me (though not new: this warning was first published in September 2017): KISS Library, where many authors are finding unauthorized electronic versions of their books.

KISS Library differs from the typical pirate site in a couple of ways. Unlike, say, Ebook Bike, run by serial copyright thief and “information wants to be free” ideologue Travis McCrea, it doesn’t simply offer pirated books for free download, but appears actually to be selling them. Also unlike Ebook Bike and other pirate sites, it seems to promptly respond to DMCA notices.

I found two of my own books listed. 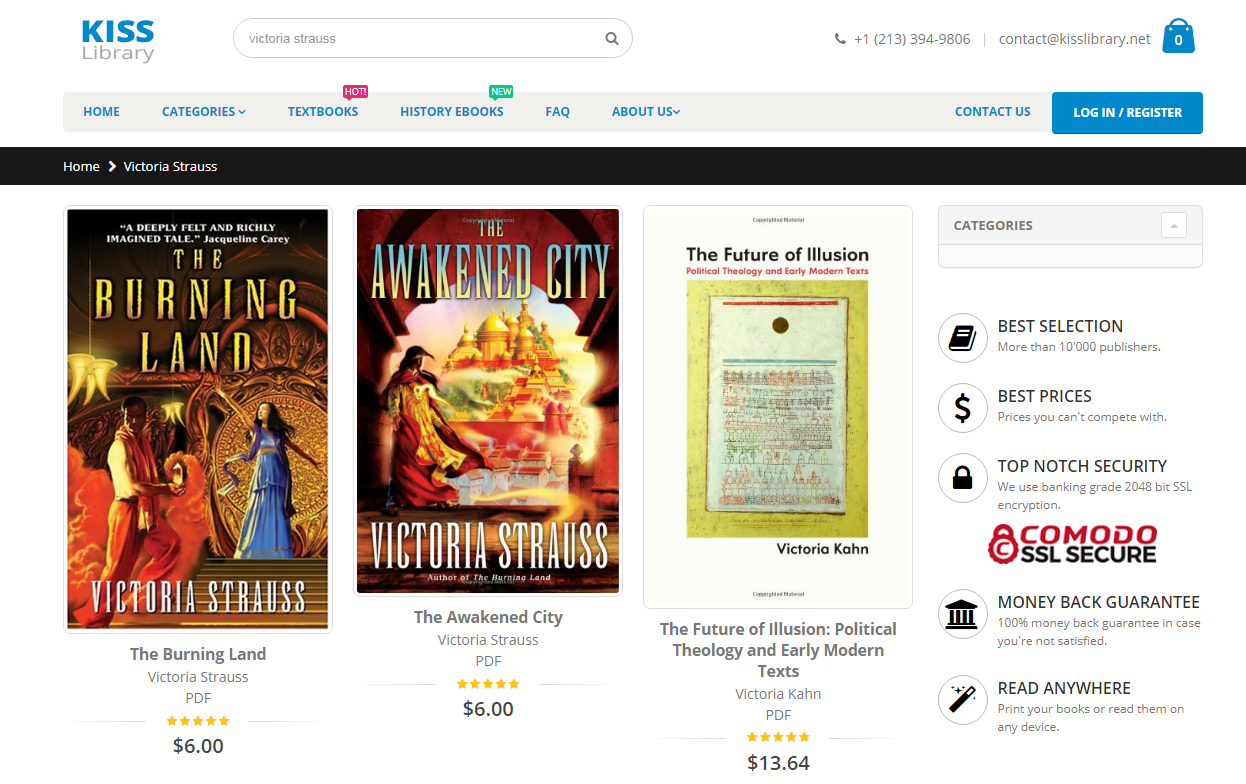 I filled out the form on KISS’s DMCA page, and within minutes my books vanished from the site. I also received this email:

Awwww. How nice. They’re contrite! It’s not their fault! They’ll pay back the illicit profits! They are so transparent about the whole thing!

Except…it’s bullshit. They send the exact same response to everyone. Here’s someone who got it in July: 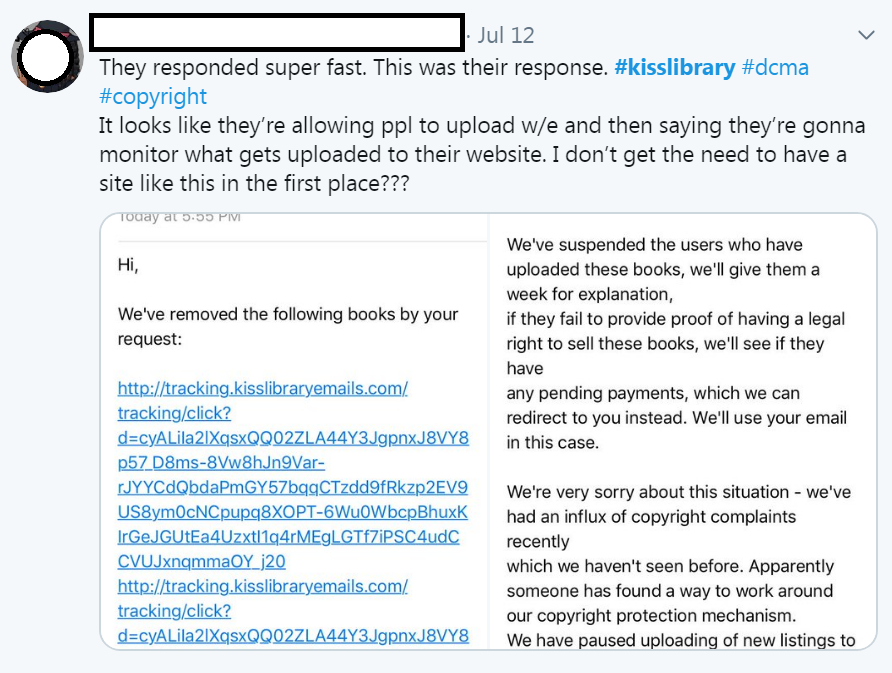 A friend of mine got it in March. Someone else got it in 2018. KISS seems to have concluded that it’s better to lose a few listings (which can always be reinstated later) than to make waves by ignoring authors or telling them to f*ck off. It’s a different strategy from the “fight everything” stance of many pirates, or those that send takedown notices into oblivion–and it’s probably why KISS, with its huge, monetized catalog of pirated books, hasn’t sparked the uproar other pirate sites have.

It’s been suggested that KISS doesn’t actually take down disputed books: it simply blocks the IP addresses of anyone who sends a DMCA request so they can’t see that the books are still on offer. I’ve no idea if this is true.

Also, there’s the question of whether KISS really offers the books at all–whether it’s nothing more than an elaborate phishing scheme that uses books as bait. I followed purchase links all the way to the point of providing credit card info, but I didn’t dare do more. This anti-piracy service, however, did:

An interesting fact is that they actually don’t even have the books they are selling! The catalog is automatically generated from indexing Amazon author pages.
We know this because we tried to buy a clients ebook out of curiosity..

Exactly! This why we tried to purchase one of our authors eBooks to see if they could deliver the content.
We never received anything. -Eric

So if you visit the site, be careful. Send the DMCA if you find your books, but don’t try to test the system by buying anything.

KISS’s About page features a photo of smiling millennials and a Canada address. KISS originally had a .com domain, registered in 2017 by a Gibraltar-based registrar that was shut down by ICANN this past March. Its current .net domain, which is just 6 months old, is registered to Legato LLC, a Russian company. Make of that what you will.

UPDATE: An update from the anti-piracy service:

Hi Victoria, sorry for the late reply. I wanted to ask the dev and legal dpt. regarding this. The website didn’t seem to be hosting any phishing or malware. Its just an elaborate scheme profiting from pirated content. We also used a dummy PayPal account for this testing. -Eric

So maybe there’s no content on the site–just book covers–and all they’re doing is taking the money and running.

ANOTHER UPDATE: Per this Facebook post from Tamara Thorne, the Authors Guild is aware of KISS Library and is preparing a statement on the status of the matter and steps they are taking. I’ll link to or post it here when it’s released.

UPDATE 8/10/19: Well, that didn’t take long. Thanks to an alert commenter, I visited KISS Library this evening and found this: 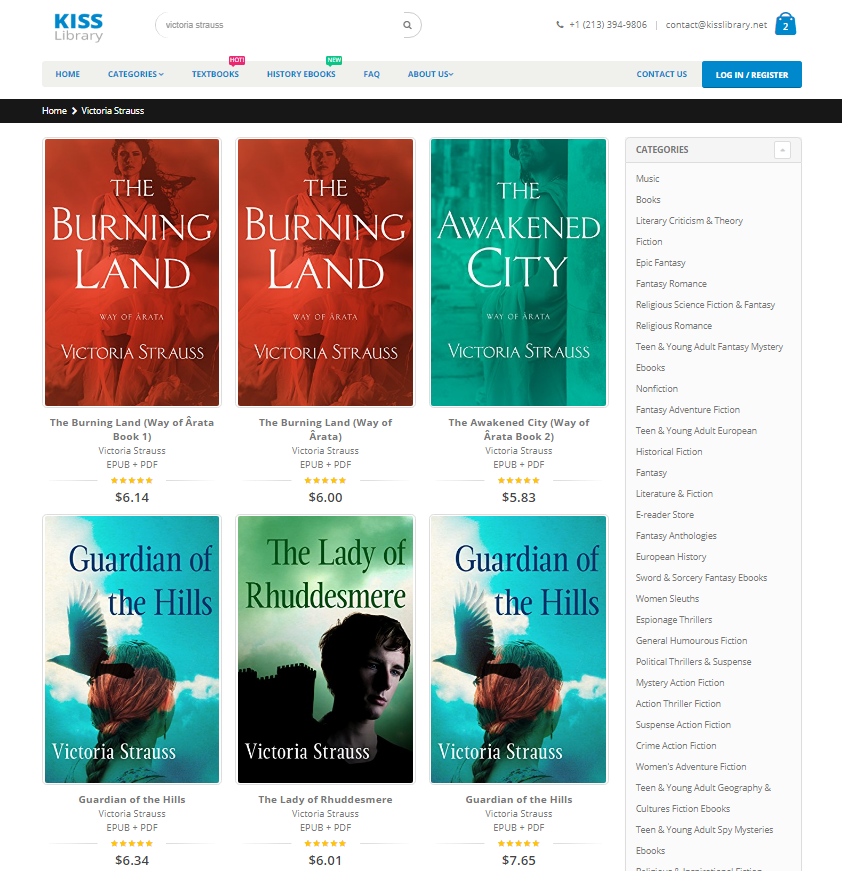 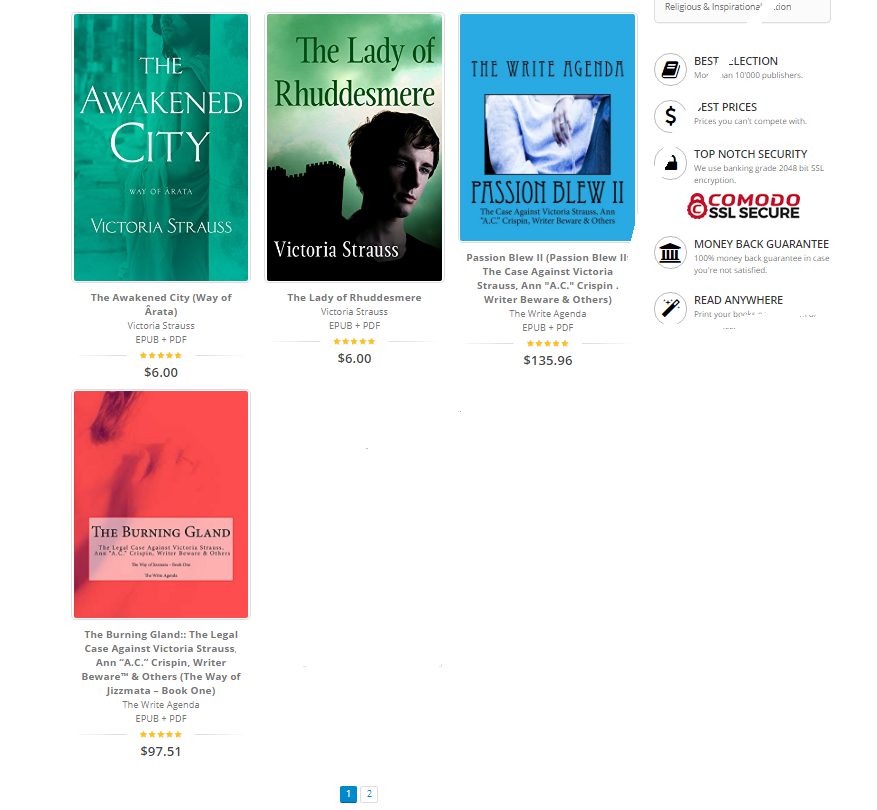 Not only have they reinstated the two books I DMCA’d (with different covers; they’re both backlist books that I re-published with Open Road Media), they’ve added my two other Open Road backlist books, and a pair of fake books put up by a Writer Beware-hating troll a few years ago as part of a harassment campaign. Think the KISS Library folks know about this post?

UPDATE 8/11/19: Oops, gone again (except for the two fake books that use my name). Someone is following Writer Beware!

UPDATE 7/9/20: Big-name Authors Guild members have joined with Amazon Publishing and Penguin Random House in a lawsuit against KISS Library, identifying KISS as a pirate site and demanding that it “be enjoined from illegally copying, distributing, and selling works written or published by the plaintiffs”. This article from Publishing Perspectives provides detail, including statements from Amazon and PRH:

In a statement issued by an Amazon spokesperson to Publishing Perspectives, we read, “Combating piracy requires collaboration across the industry and Amazon Publishing is glad to join together with Penguin Random House and members of the Authors Guild in this suit against book piracy entity KISS Library. We are committed to holding bad actors accountable.”

And Carolyn Foley, Penguin Random House vice president, associate general counsel, tells Publishing Perspectives, “Pirate sites like KISS Library harm authors and publishers and threaten the quality and vitality of the authorship so fundamental to free and healthy democracy; we are proud to stand with our authors, the Authors Guild and Amazon against the scourge of piracy.”

UPDATE 9/1/20: KISS Library has been shut down by order of a federal judge, due to its failure to respond to the lawsuit.

The sweeping order effectively shuts down the operation in its current iteration, and seeks to block the defendants and any of their service providers—including payment processors, banks, ISPs, back-end service providers, and search engine or ad-word providers—from collaborating to distribute the plaintiff’s copyrighted works in the future.

UPDATE 12/30/21: Following KISS Library’s shutdown due to its failure to respond to the lawsuit, the same judge has issued a permanent injunction barring the defendants from operating the site, as well as a default judgment of $7.8 million in favor of the plaintiffs, the maximum amount allowed by law.

Not only did KISS Library’s owners–a pair of Ukranian nationals–fail to respond to the lawsuit, they “used a series of ruses to hide their identities and avoid both detection and accountability”. Of course, shutting down pirate sites is like playing whack-a-mole, as PW acknowledges: “It is unclear, however, whether the plaintiffs will find a way to collect on the damages awarded, or ensure that the defendants do not resume their illegal activities using other identities.”

It’s at least a moral victory, for whatever that’s worth. On to the next one!

From the Philippines, Not With Love: A Plague of Publishing, Marketing, and Fake Literary Agency Scams