The internet and social media have transformed writer/agent/publisher interactions in many ways, one of which is the proliferation of Twitter pitch events, such as #PitMad, #DVPit, and others.

While no online innovation has (so far) managed to supplant the traditional query-and request route, these events do attract plenty of reputable agents and publishers–unlike other purported shortcuts (*cough*Publishizer*cough*). However, inevitably, they are also stalked by marginals, amateurs, and even scammers.

For instance, Eliezer Tristan Publishing, which charged a $500 fee and went out of business just months after opening up, haunted #PitMad. Ditto for GenZ publishing, which charges authors $2,500. Burchette and Ferguson, a brand-new publisher staffed by people with zero relevant experience, participated in pitch events before they even launched (and went out of business shortly thereafter). 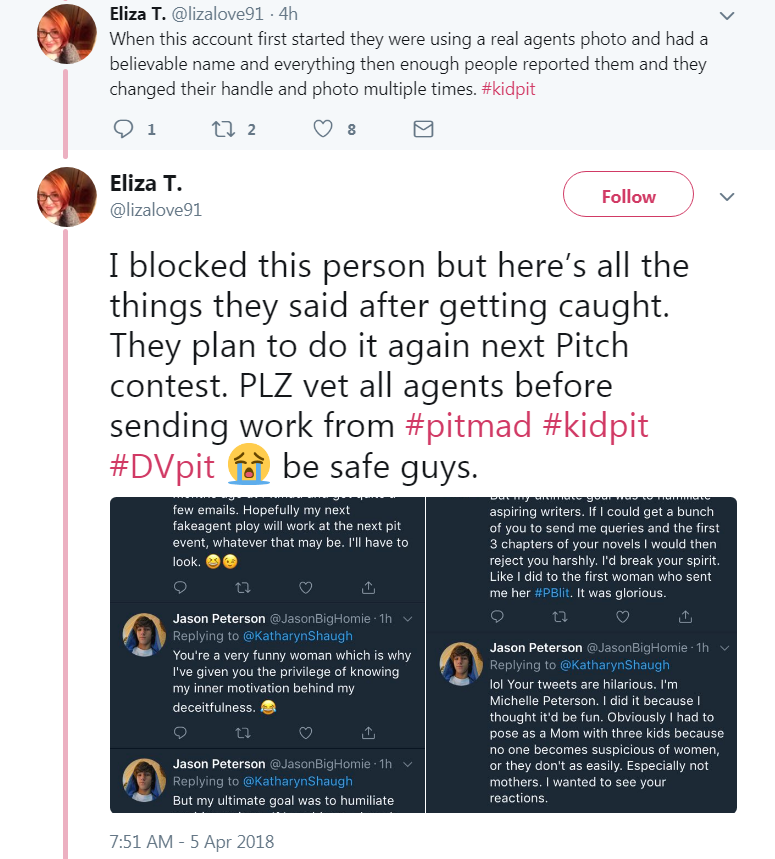 I’ve gotten many, many other questions about approaches by dubious companies and individuals as a result of pitch events. All in all, therefore, it pays to be careful, and if you haven’t heard of an individual or publisher who approaches you, to research them before responding. (You can contact me; I may have heard something.)

Which leads me to the subject of today’s post. I might not normally devote an entire blog post to one marginal agent, but this one is such an egregious example, and seems to be so active on social media–including #PitMad–that I think she’s worth a special feature.

Pigeon House Literary Agency launched just this past February. It’s run by Druella Burhan, whose resume includes none (zero, zip) of the relevant background experience you typically want to see from a new literary agent–such as a professional writing resume, or having previously worked for a reputable agency or publisher.

The lofty claims Burhan does make are either unverifiable, or provably false. For instance, here’s Harvard Medical’s publication on its 2011 MD-PhD graduates. Surprise! There’s no mention of Druella Burhan.

Here’s some of Burhan’s agenting philosophy:

The logo (for lack of a better word) at the top of this post provides a preview of the rest of the Pigeon House site (a Wix freebie), which is amateurishly formatted and clearly not proofread (several pages have fully-justified text, with words cut off at the end of lines–I mean, it’s a Wix freebie, it’s not like you have to be an expert to get it right) and rife with typos, grammatical errors, and bizarre word use. For instance, 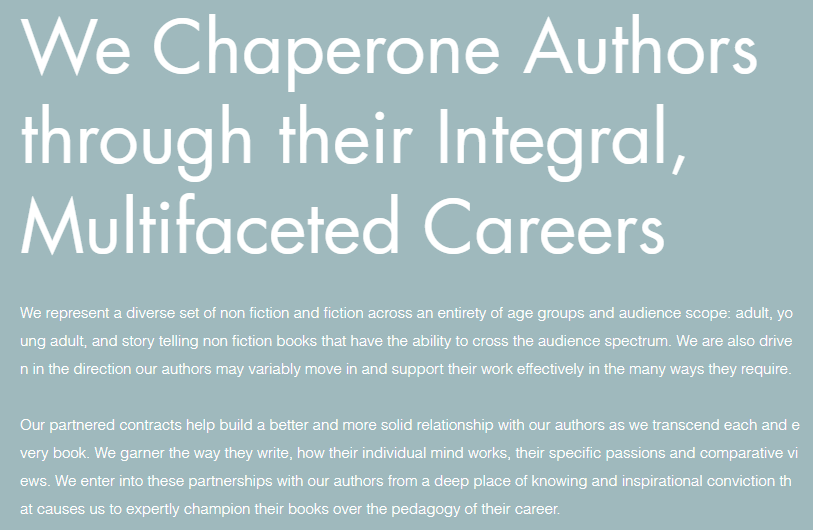 That’s bad, but here’s what it originally looked like. Burhan changed it shortly after I tweeted about it: 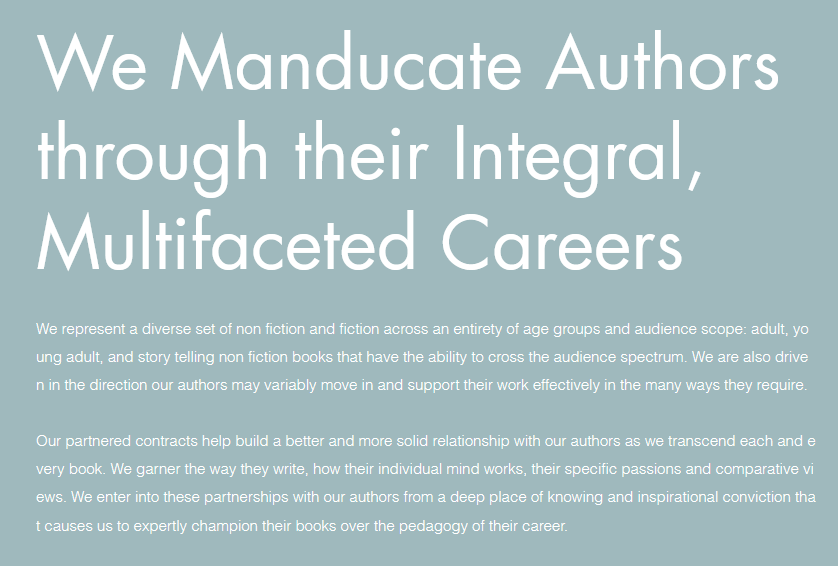 There’s more: the Who We Are page, which bafflingly proclaims that the agency will “strive to bring a supreme appealingness and picturesque style of books from darkness to life”; the Foreign Rights page, which erroneously cautions writers that “If a literary agent does not agree to take you on as an international client/author, you will not be able to sell books overseas”; the Referrals page, where Burhan bizarrely invites other agents to send her clients. And here’s the contract she is sending out, which includes the same formatting/proofreading errors as her website, and is really just an embarrassment.

It’s a perfect carnival of amateurism.

Am I being mean here? Maybe, but before you whip out the “everyone has to start somewhere” argument, consider Burhan’s false claims about herself and her aggressive use of social media to recruit clients despite her obvious ignorance and complete lack of relevant qualifications (I first heard of her because she was trolling on Reddit, and she is actively inviting queries on her Twitter feed).

The damage an amateur agent can do is considerable–squandering clients’ chances with substandard submissions, submitting to disreputable or incompetent publishers, inadequately understanding publishing contract language and therefore not capable of effectively negotiating it. An amateur agent may not drain a writer’s bank account the way a scammer would, but the bottom line isn’t that different: no sale, and lots of wasted time.

Writer Beware in the Time of Coronavirus