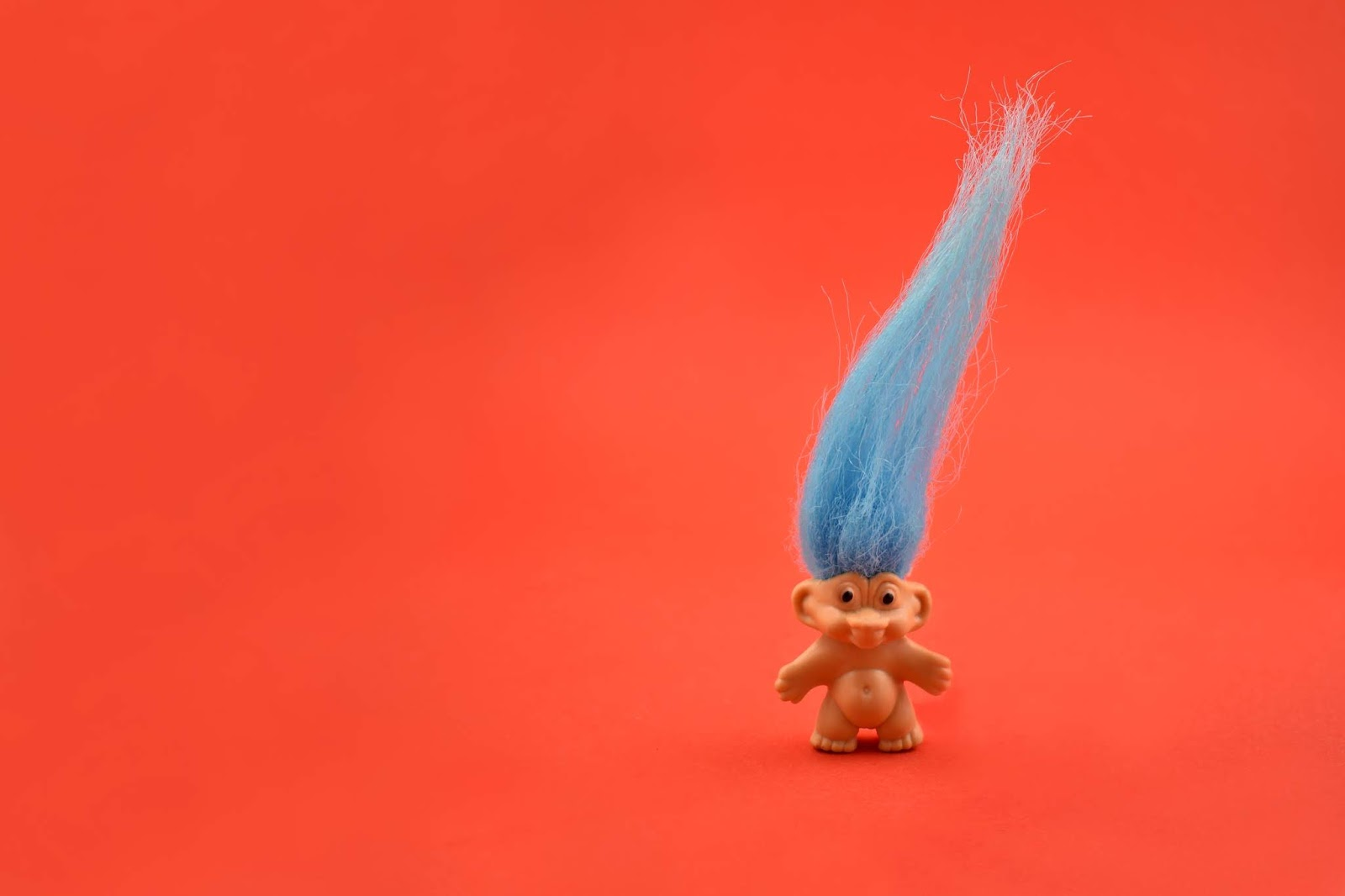 A couple of weeks ago, my Twitter warning about an amateur literary agent received a fairly curmudgeonly response. 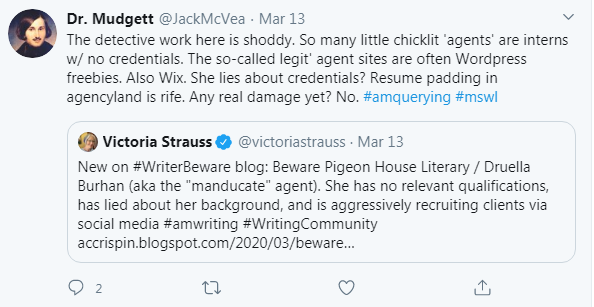 Mistaking it for a serious (if misguided) comment, I responded with a thread about why it’s, well, bad for an agent to lie about their credentials. Which prompted this: 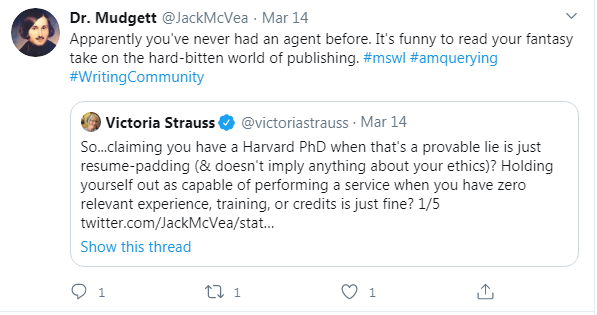 After a couple more exchanges in a similar vein, plus a not-so-subtle threat (I do give this person credit for knowing the difference between slander and libel), “Dr. Mudgett” flounced. 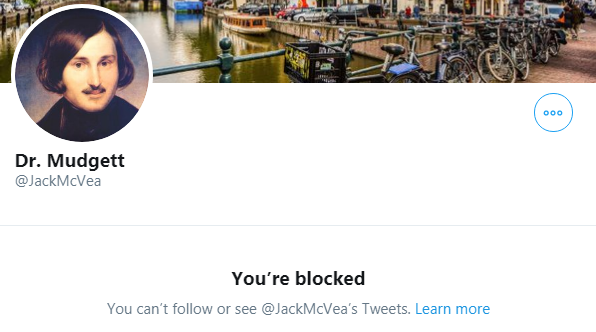 Soon after, several alert individuals messaged me to let me know that “Dr. Mudgett” isn’t just a rando with an inflated sense of self-worth and a profile named after an infamous American serial killer, but one of the sockpuppets of an astonishingly prolific Twitter troll possessed of awesome vitriol and seemingly unlimited free time to indulge it. 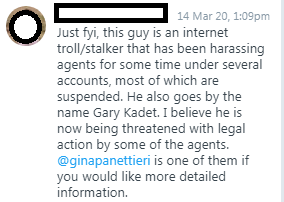 The troll’s full name is Gary S. Kadet–and though I’d never heard of him before he decided to call me out, he is well known in the Twitter writing community as someone who, via large numbers of fake accounts (most of which have been suspended by Twitter), hijacks popular hashtags like #amquerying, #mswl, and #WritingCommunity to launch vicious unprovoked attacks against writing and publishing people of all kinds, especially new writers and literary agents. So copious is his output–we’re talking daily, even hourly tweets–that sometimes he runs out of new insults and has to recycle them. (Sample, if you can stomach it, the stream-of-invective narrative of his Dr. Mudgett Twitter feed. UPDATE: the feed has been de-activated, so many of the links below may not work–but you can still get a glimpse courtesy of the Wayback Machine.)

I’m always interested in the bizarro side of writing and publishing, and Mr. Kadet certainly seemed to fit the bill. So I put out a call for contact.

I got a perfect flood of responses (you can see some of them in the replies to my tweet). I heard from agents and agency interns whom Mr. Kadet had targeted for insults, mockery, and general harassment–especially if they were women, and in some cases after they rejected one of his manuscripts (Mr. Kadet is a [currently] frustrated novelist). I heard from writers he’d savaged for nothing more than posting positive comments about something, or announcing a book sale, or just for talking about writing. Much of his trolling seems to be of the drive-by variety, but I also heard from writers for whom he has conceived a deeper grudge–some of whom he has been stalking and attacking for years, and not just with nasty tweets, either. Some of these individuals told me that he has doxxed them, and made public things about their personal lives they would have preferred not to share. One of his targets was forced to seek help from the police.

Several people have written about their encounters with him (prompting him, in at least one case, to send a laughably bogus cease-and-desist). More personal accounts of Kadet encounters are here. Also here. In fact, he’s so famous–at least, as a troll–that he has inspired a parody Twitter account. I guess that’s some form of validation, right?

Socks he’s using currently (that I know of): @JackMcVea, @KatzProserpine, and @SureThingOscar. They regularly RT one another and also share tweets back and forth: 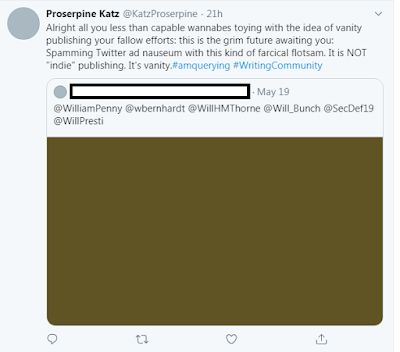 Mr. Kadet loathes a lot of people, but for one agent in particular, his hatred burns with a white-hot flame: Gina Paniettieri of Talcott Notch Literary Services. In 2018, Talcott Notch rejected one of Mr. Kadet’s manuscripts, to which Mr. Kadet took extreme offense, and he has been targeting the agency and its agents ever since. 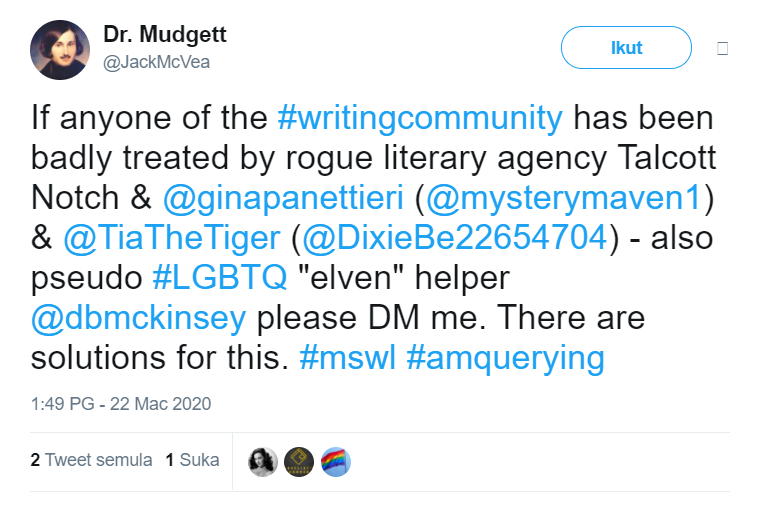 In addition to a veritable tsunami of noxious tweets, promises to sue, accusations of violating his “IP confidentiality” (apparently because Gina revealed the rejected ms.), and bogus bad reviews wherever he can place them (not always successfully, since they are so demented that they get flagged), Gina tells me that he has called her home to harass her, and that he’s currently demanding that she “settle” with him–i.e., pay him off–so that he’ll stop.

Here’s an interview with former Talcott Notch agent Tia Mele about toxic writers in general and Mr. Kadet in particular.

So who is Gary S. Kadet IRL? There’s not a great deal to be found on a websearch, but he did publish a novel in 2000 with Forge, and was apparently an editor with the Boston Book Review. He has lived in Cambridge, MA and Providence, R.I. Twitter isn’t the only place where he has been accused of stalking. 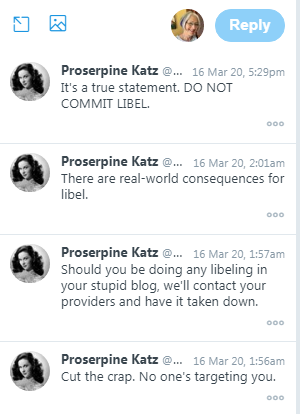 Ooooh, scary! Not to be outdone by his alter ego, Mr. Kadet reached out to SFWA under his own name. Of course, he couldn’t resist mentioning Talcott Notch. Also note the date: more than a week before I put this post online. 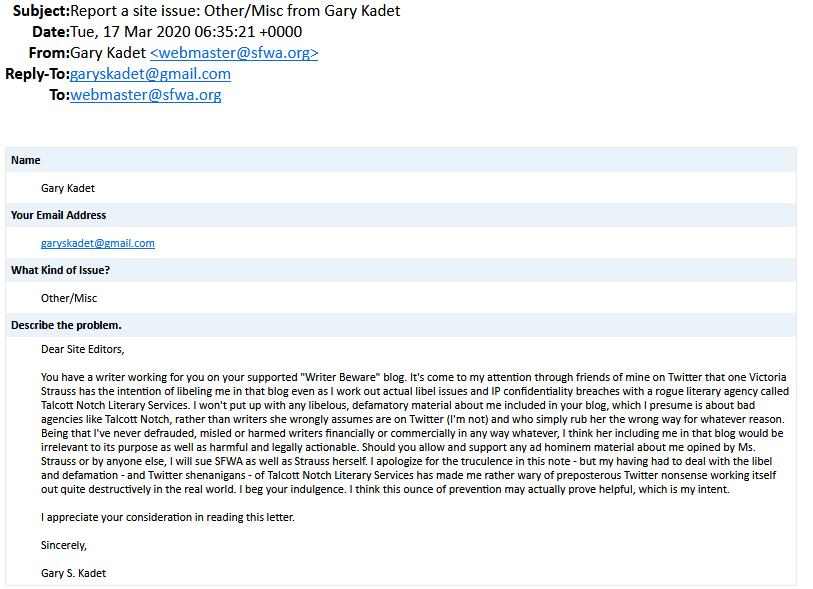 Mystery Writers of America, one of Writer Beware’s supporters, received an identical “complaint” on the same date. Fortunately, both SFWA and MWA know how to handle trolls.

So what’s the bottom line here–other than the bigger issue of the toxicity that flourishes on social media and the inevitability of encountering it if you’re active online? I guess it’s really just the familiar advice: “Don’t feed trolls”. Starve the energy monster. The thing with trolls is that, for the most part, it’s really not personal. They don’t care about you; it’s your reaction they need. They thrive on your distress, and draw strength from your response. Depriving them of these things may not shut them up–they can’t really control themselves–but it is probably the single most frustrating thing you can do to them.

So if you find yourself targeted by Mr. Kadet–or, indeed, if any random tweet of yours receives a nasty or belittling response from an account you’ve never heard of–the best possible comeback is simply to block the account and move on.

UPDATE: I learned this evening that Mr. Kadet today sent his “bad writer Strauss” message to Horror Writers Association, another of Writer Beware’s supporters–and for good measure, sent it to MWA a second time. He has also weighed in in the comments here.

…and claiming that it is not Mr. Kadet’s sockpuppet account… 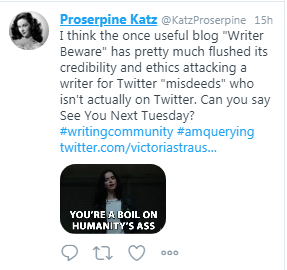 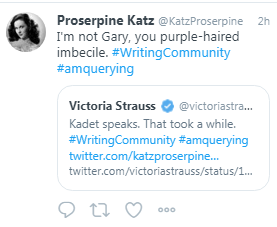 UPDATE 6/17/20: This fascinating document provides “a list of publicly available sources about Gary Scott Kadet, organized as a timeline”. Very comprehensive and detailed, with abundant links. 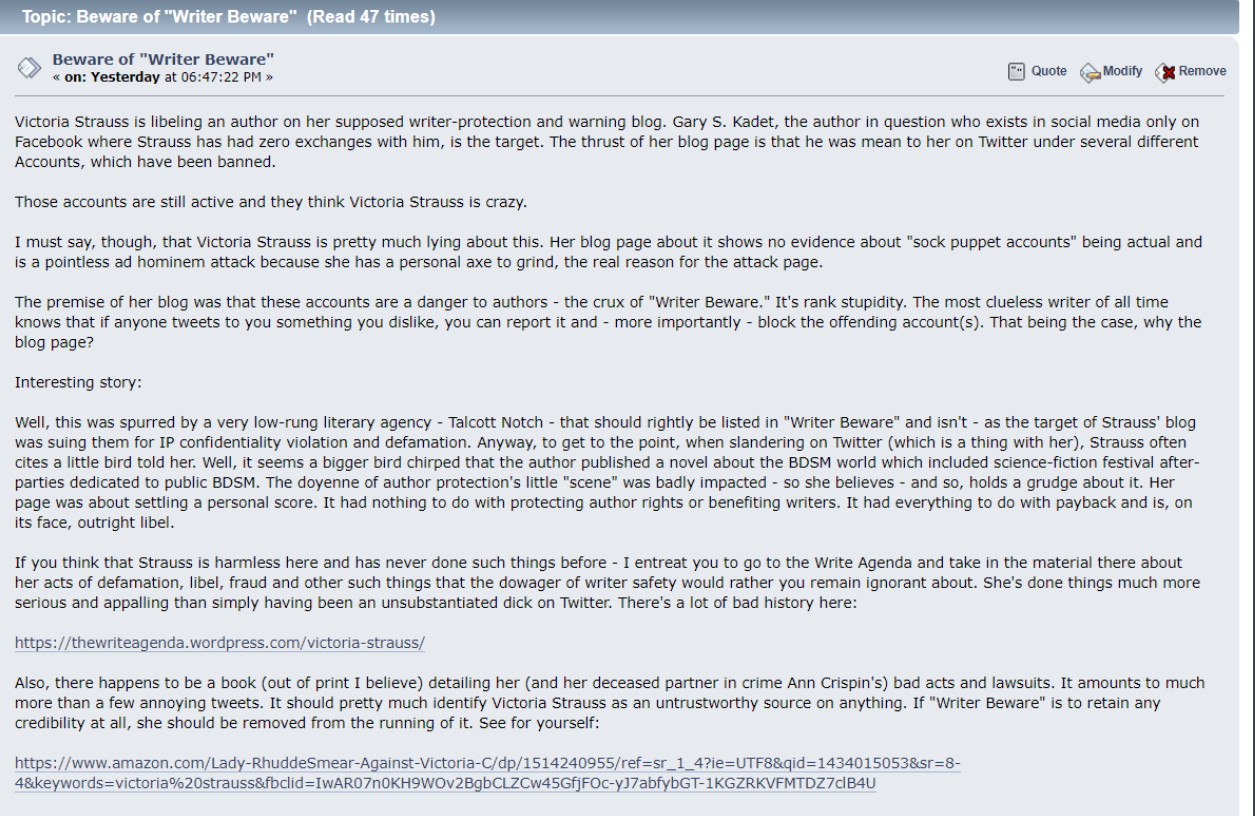 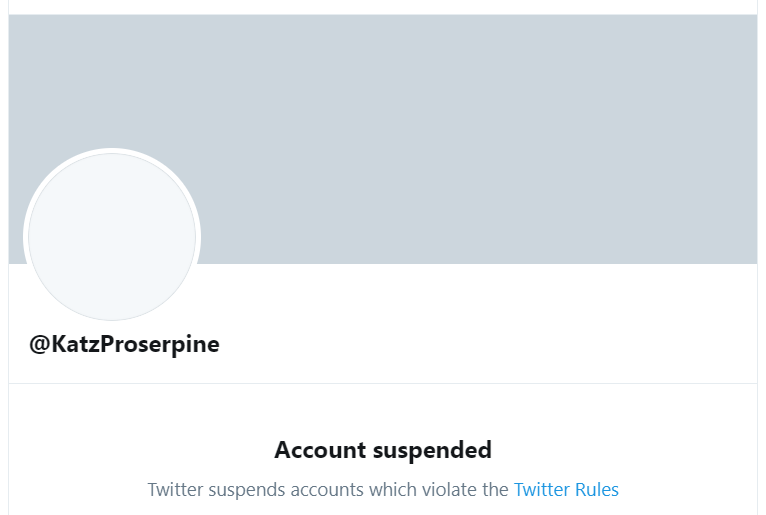 The other two are still going strong.

UPDATE 10/12/20: Abandoning his pretense to be Twitter-free, Gary is now tweeting under his own name, as @garyscottkadet. If he wants to keep pretending he doesn’t have sockpuppet accounts, though, he should probably stop recycling tweets. 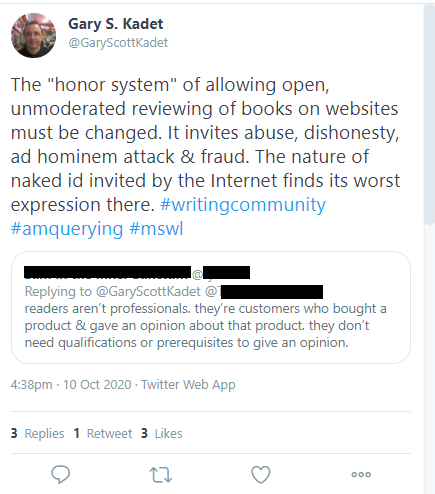 Probably because he follows this blog, he then tried to clean things up: 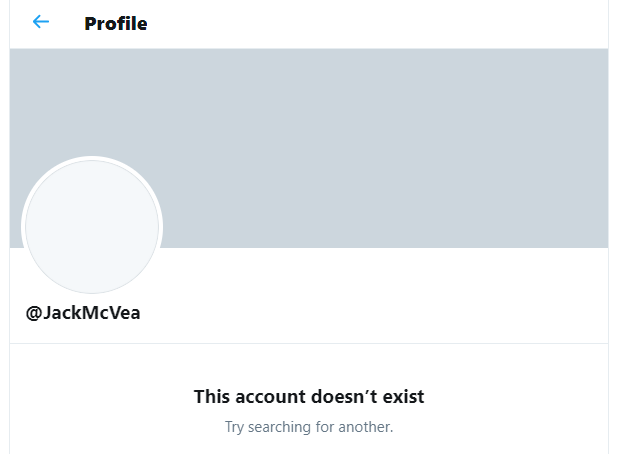 The @SureThingOscar account survives (so far), though it hasn’t posted anything since July.

UPDATE 8/8/21: A flurry of recent tweets referencing this blog post caught my attention. Apparently Gary is lashing out in defense of the new publisher of his novel Ogre Life (the original publisher, Breaking Rules Publishing–which has problems of its own–defenestrated him after just a couple of months).

The new publisher is Ukiyoto, a company that appears to be based in India but claims to have branches in multiple other countries. I’ve gotten some questions about it, and have seen snippets of its contract (the person who sent them was too intimidated by a bogus confidentiality clause to share the whole thing), which confirm, among other things, that it pays on net profit (always a red flag).

Beyond that…Ukiyoto may not be an actual vanity publisher (though it does sell services), but it is clearly an author mill. Since listing its first book on Amazon in April of 2019, it has pumped out an astonishing 679 titles. So far in 2021, it’s averaging 39 books per month. That’s on a par with PublishAmerica, or even Omniscriptum.

UPDATE 8/25/21: For those of you who are still following along…he just can’t quit me… 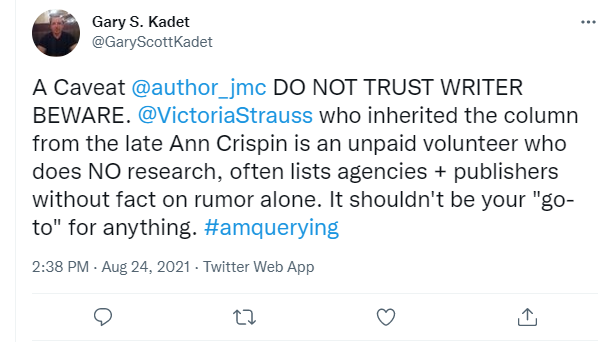 Writer Beware in the Time of Coronavirus