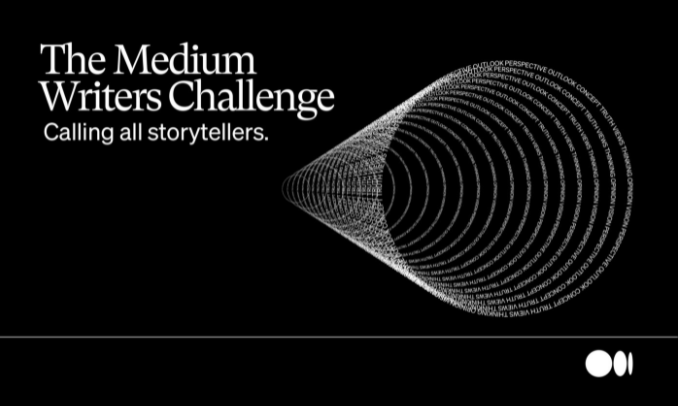 That’s right, boys and girls–it’s another of my posts about hinky contest rules.

If you’re a regular reader of this blog, you’ll know I publish a lot of these. That’s not because I like repeating myself…it’s because bad contest legalese is depressingly common, especially in contests conducted by high-profile organizations or individuals, such as HBO’s “Lovecraft Country” short story contest, or T.A. Barron’s Once Upon a Villain flash fiction contest, or the Sunday Times/Audible Short story award, or any number of others. Because it’s so common, though, it never hurts to put out another warning….especially when a contest offers the kind of prize money that’s sure to attract droves of writers.

In a twist, though, I’m not just going to talk about greedy legalese, but also about how one contest sponsor responded to criticism and made it better.

The Medium Writers Challenge is an especially rich contest, with a $50,000 grand prize, $10,000 for four finalists (one of the finalists will be the grand prize winner, so one person will actually win $60,000), and 100 honorable mentions who will each receive $100.

To enter, writers choose a prompt, create an essay of 500 words or more, and publish it on Medium. A prestigious slate of judges that includes such luminaries as Roxane Gay and Natalie Portman will select four finalists, one for each prompt, and then choose the grand prize winner and the honorable mentions. The deadline to enter is August 24, 2021.

Moving on to the fine print, namely this paragraph of the official rules: 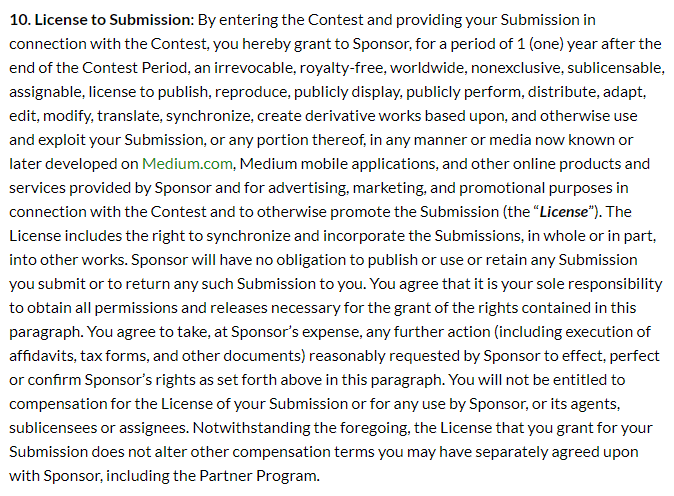 I got several emails and some social media pings about this paragraph yesterday. The concern was with the license writers grant simply by entering the contest, the wording of which gives Medium “an irrevocable, royalty-free, worldwide, nonexclusive, sublicensable, assignable” license to do pretty much anything it wants with any entry, whether or not it’s a winning entry.

This kind of language is extremely common, especially, as I’ve mentioned, in high-profile contests. The intent isn’t so much a nefarious scheme to steal writers’ rights or bind them to eternal servitude, as it is a shortcut for contest sponsors, who don’t have to fuss around with contracts for winners because they’ve already agreed to terms. It’s very easy to mitigate such language–for instance, by releasing non-winning entrants from the license once the winners are declared–but, carelessly or lazily or just sharkily, depending on how many lawyers formulated the rules, many contest sponsors don’t bother, even though it means that they retain rights they likely have no interest in and no intention of ever using.

In Medium’s case, though, they did take steps to mitigate. Note the second line of the paragraph, which limits the license to one year from the end of the contest period (presumably that’s the August 24 deadline). In other words, this is not the perpetual license that some other contests demand: it has an endpoint, after which it expires.

Here’s the interesting thing, though. Paragraph 10 didn’t always read the way it does now. This is the original version, the one that got people upset: 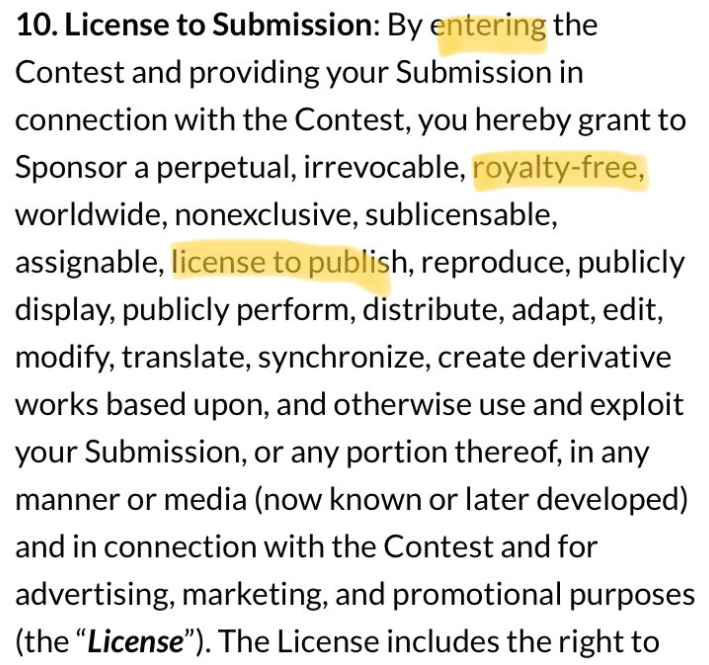 Note the difference: there’s no limit on the grant period. In this version of the contest rules, the license really is perpetual.

Writers asked questions and spoke out on social media. To its credit, Medium took notice.

(1/3) We’re seeing some questions around the rules to the #MediumWritersChallenge. We’ve updated the language to clarify our intent: 🧵

➡️ You own the copyright to your work, as with all work on Mediumhttps://t.co/30w6ZJMHYi https://t.co/7XR4KU8JBT

➡️ You are granting us non-exclusive rights, which means you can monetize your writing however you want, after the contest ends. Keep in mind the story can only appear on Medium during the contest period https://t.co/30w6ZJMHYi

Our license is limited to promoting the content on Medium and across Medium channels [link]https://t.co/30w6ZJMHYi

This is what can result when an organization re-thinks pointless legalese. I wish that happened more often.

Don’t get me wrong. Medium’s license language is still excessive, in my opinion, because there really is no reason for them to retain non-winners’ rights once the winners are declared. Still, a year is better than forever.

Entrants also need to consider what they’re granting if they do win. There’s a lot of potential uses Medium can make of their work (it isn’t clear to me that the license language limits Medium’s use of entries in the way the third tweet claims), including creating derivative works and “incorporat[ing] the Submission, in whole or in part, into other works.” $10,000 is a decent payday for that kind of grant. But is $100?

As always, read–and make sure you understand–the fine print.