Today’s guest blog post, from journalist Mridu Khullar Relph, explores the world of writing schemes and scams from an international perspective–something that’s increasingly an issue for Western writers looking to find work overseas. Some of the scams Mridu identifies below may sound familiar, but there’s nearly always an international twist.

Other resources: see my 2011 blog post on literary scams in India. Author Sameer Kamat also covers India-based schemes and scams on his blog.

If you’ve done overseas work and have run into any of these scams–or if you’ve encountered other scams that you think writers should be aware of–please post your story in the comments. It’s one thing to provide general information about what writers should avoid, but what really hits home is personal experience. 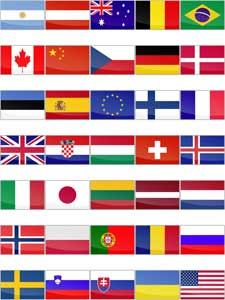 Even as recently as five years ago, the covers of major news magazines were screaming themselves hoarse about the outsourcing of publishing, the writing of your local newspapers abroad, and the taking away of editorial jobs from the West and passing them off to the East.

Well, that hasn’t happened (editors and agents are still happily in business in New York, thankfully). But what has happened, and what will continue to happen, is that the world, especially the publishing world, has become a smaller place.

The talent still rises to the top, but where that talent came from a few select countries before, now it comes from the world over. The Internet has opened up opportunities for the unknown non-Western writer to get published in the West, but what is even more interesting is that it has opened up an entirely new, global market for the Western writer who can access new markets, readers, and opportunities at the click of a button.

While that’s great news, it’s also where part of the trouble comes in. Because although doing business abroad can be a fantastic idea, scams don’t respect international borders. Inevitably, you’re going to encounter dodgy situations–some that you may recognize, but others that you may be unfamiliar with in your own country.

Here are some of the most common scams you may run across in the writing and publishing industry abroad, and tips on how to avoid falling for them.

The Scam: Paying the agent

Agents who ask you to pay fees upfront are a pretty common scam in the US, but (and this is confusing), this is not always the case abroad.

For instance, I know a very reputable agency in India, my home country, that actually accepts every manuscript that comes their way and charges to edit, polish and then submit the idea to publishers. These guys have posted deals on Publishers Marketplace and they’re pretty upfront about how they function, so they’re a serious agency, but they also charge. Without context and background, they may seem to be a scam–but they’re actually not.

So what do you do if you have, say, a book that could do potentially really well in India? Is it worth going through this agency–or another like it?

What I recommend is always e-mailing clients, customers and people who’ve forked over the cash, no matter which country they’re in, to ask about their experience. Are they satisfied? Were there problems? If you can’t go yourself, send a friend to a bookstore in that country
(or look through their online bookstores) to see which publishers have
bought the titles the agency claims to have sold, and whether those titles are on the shelves. When it comes to an agency, you should always be able to talk to at least one client and see a number of recognizable book titles on their list before you decide whether they’re legit or not.

And if writers or customers have had problems, or you can’t find a single book or client? Run, don’t walk. It may not turn out to be a scam after all (just an inexperienced agency), but do you really want to take that risk?

The Scam: “Please send me your books”

When you’ve published a book, especially one that’s selling well, sooner or later you’ll receive an e-mail that goes something like this: “Dear Writer, I am a huge fan of your work, your website, your Twitter, your Facebook, every single word you’ve written on the Internet. Now you have a book out and I would love to buy said book, but it isn’t available in my impoverished country. Could you please Fedex me ten copies?”

First, you’ll be flattered. Then, you’ll rally against a world in which people have no books and be thankful for the fact that you do. Then, and only then, will you notice that last little bit at the end. Uh, ten copies? Why does this person need TEN COPIES?

This isn’t always a scam, obviously. Sometimes, it’s a teacher who genuinely wants copies for his school library or a woman who’d like some for a new book group she’s formed. And let’s face it, if it does turn out to be scam, you’re at most out of a few copies of your own book. Like when you’re charged more by cab drivers because you look like a tourist, it’s more about the principle than the actual monetary value of the books.

To check, you could Google the name of the person who’s sent you the request, see if they’ve ever actually commented on your blog or follow you on Twitter. And of course, you can check where they live and how difficult it is to actually get books there. Surely someone with access to the Internet wouldn’t mind downloading the e-copies you’re willing to send?

They’re everywhere these days in the era of self-publishing, many of them fantastic, some of them not. In fact, you’ll find frequently, through bitter experience unfortunately, that many people who call themselves “editors” have no editing experience at all and that e-course instructors who want to teach you how to make an income freelancing, often are making their own income solely through teaching.

In fact, just last week a freelancer wrote to me (with no hint of irony, I might add) saying that she was having a lot of trouble getting new assignments and thought the market was dying up, so she was taking up teaching freelancing instead. This woman has credentials–but that means absolutely nothing because her credentials aren’t allowing her to sustain a happy career.

Here’s a tip: Whenever you’re considering hiring someone from overseas as an editor, to evaluate your manuscript, or to teach you something, make sure that you know the actual CURRENT professional qualifications of that person–and that you understand what those qualifications mean. When someone says they’ve been published in some of the top publications in, say, Brazil, look at these top publications and the standard of their content and then decide whether it’s something you can respect. When writers say they’ve been published in “national magazines,” what nation are they referring to? What publications? And do publications in that nation have writing standards you respect?

In some cases, these so-called editors and teachers will simply take off with your money. If you can, never pay all of it upfront.

If you’ve ever considered lightening your workload by outsourcing some of the grunt work to somebody else, you’ll no doubt have come across virtual assistants and content outsourcing agencies, who’ll offer to do the research and administrative work for you.

Many of these (the cheaper ones, anyway) are located abroad, usually in Asia. And while there are many many good ones, there will always be a few that will take your money and deliver sub-standard work, if they deliver at all.

The way to escape this scam? References, references, references. That is the only way to start doing business with people outside your own country. Word of mouth. Run Google searches. If something negative comes up, don’t ignore it! Investigate it, if you can. Make sure a phone number is provided–and make sure to call it, to see if you can actually communicate with the person on the other side. You’ll be surprised at how many outsourcing agencies list numbers that don’t actually exist–or have staffers attending phones who can’t communicate with you. What happens when you have an emergency situation and need to talk to a live person on the phone?

The Scam: Publications who hire you with no intention of paying

Like in your own country, publications guilty of this will include magazines, e-zines, even national newspapers (no kidding!). One of my least favorite personal experiences with this is when a publication in the UK asked me to write for free. I told them I couldn’t, stated my fee, and was pleasantly surprised when they agreed to pay it. Well, they got the piece for free anyway because they ran my article and never bothered paying me. Turns out, I wasn’t the only sucker who got scammed into this. They’d hired several writers from various countries (including the UK) with no intention of ever paying them.

If you’re considering working with an unknown overseas publication (and you should always carefully research it before deciding, to check quality and to turn up any complaints or reports of problems), my recommendation is to never give work that is worth more than a few hundred dollars to begin with. If you’ve done thousands of dollars worth of work for somebody, you’re desperate for that money and the loss is harder to bear. Start small, perhaps with a filler. Only when you’ve established that a publication is good for the money, should you think of starting a real relationship.

The Scam: Contests that ask for all rights just for submitting

As a reader of Writer Beware, you’ve likely come across this one already, but I didn’t realize until recently just how pervasive it is, with national magazines being just as bad as that local e-zine. Read–and understand–the terms and conditions, especially if the contest is hosted abroad. If there are no terms and conditions listed, don’t submit!

Mridu Khullar Relph is an award-winning freelance journalist who has written for The New York Times, Time magazine, The International Herald Tribune, Marie Claire, Ms., Elle, and hundreds of other national and international publications. Check out her tips for writers on her blog and connect with her on Twitter or Facebook. She’d love to hear from you.