I first started getting questions about Illinois-based Green Ivy Publishing in 2015. From its website (here’s what it looked like then, courtesy of the Wayback Machine), it was clearly pay-to-play–not least in its use of the term “hybrid” to describe itself. Genuine hybrid publishers do exist, but far more often, “hybrid” is a marker for a deceptive vanity publisher.

Among other warning signs, no fees were listed for any of the “author services” purportedly provided. Missing prices on a vanity publisher’s website usually signal that it’s expensive. Sure enough, I soon started hearing from authors who’d been quoted fees in the $3,000-4,000 range, in some cases with additional fees due for add-on services (such as extra editing) that they were only told they had to buy after they’d signed the contract. 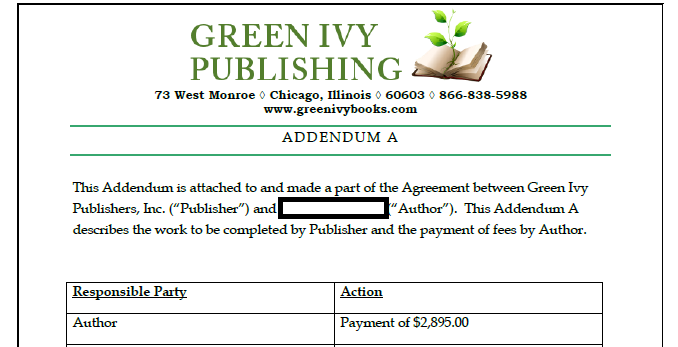 I wasn’t surprised when, in late 2015, I began receiving complaints. Terrible, substandard edits. No response to emails and phone calls; in some cases, complete radio silence once the fee was paid. Delayed publication dates. Failure to publish at all.

Over the next couple of years, similar complaints accumulated online. Then, in early 2017, Green Ivy went out of business. As with the late, unlamented America Star Books, it closed down without informing its authors, whom it had bound to life-of-copyright contracts, or removing its books from sale. Most Green Ivy titles are still available on Amazon in Kindle editions. (ASB authors can testify to the difficulty of getting Amazon to agree to take such listings down.)

I didn’t really expect to hear anything else about Green Ivy. But the other day, a news item caught my eye: twenty Green Ivy authors have filed suit in the Circuit Court of Cook County Illinois against Robert W. Gray Sr., Green Ivy’s owner, and a John Doe conspirator using the name of Jay Caliendo. (To see the docket information, click on this search page, choose Law Division, and enter case number 2018-L-011282.)

The complaint isn’t available online, but according to a summary from Law360,

The 20 clients, two of whom co-authored a book, all signed contracts with Green Ivy between October 2014 and January 2017 and agreed to pay anywhere from $1,500 to $4,000, with most people paying around $3,000, according to the complaint. Although some of the clients paid off the fee in monthly installments, most eventually paid the entire amount, the complaint said.

In exchange, Green Ivy was supposed to edit, produce and market the books, according to the complaint. However, some clients found major flaws in the editing and graphics during production, and clients typically had a hard time reaching employees or getting answers to their questions, the complaint said.

Green Ivy also did not provide many clients with sales figures or royalty checks, according to the complaint.

Eventually, Green Ivy allegedly stopped responding to clients and shut down. The state of Illinois currently lists the company as “not in good standing.”

Law360 also describes the complaint as alleging that the Green Ivy operation was an adaptation by Gray, a patent attorney, of an “invention-promotion scheme” in which he was involved, which led to disciplinary action from the US Patent and Trademark Office and ultimately got him excluded from practicing before the USPTO. Gray ran something called The Independent Inventor’s Program, through which he provided legal services to the US Patent Commission Ltd., a company that purported to help inventors protect and patent their inventions–for a high fee, of course (you can get a sense of how such predatory schemes work from this BBB complaint as well as this lawsuit brought by an unhappy USPC client; the FTC also provides this warning). According to the final order in the USPTO’s disciplinary action against Gray, he “engaged in numerous conflicts of interest with regard to accepting USPC-referred clients” (among them: allowing USPC to use his law firm’s name as inducement to purchase USPC’s services, thereby assuring a supply of clients for himself), as well as “conduct involving dishonesty, fraud, deceit, or misrepresentation”.

The Green Ivy authors’ lawsuit was filed on October 12. Gray, who is now located in Florida, has yet to respond. He’s also the focus of an earlier lawsuit brought by a Green Ivy client, which you can read here.

The Continued Decline of Author Solutions

Does the Bankruptcy Clause in Your Publishing Contract Really Protect You?