When Writer Beware was founded, an embarrassingly long time ago, most of the questions and complaints we received involved literary agents: from scammers charging fees or engaging in kickback schemes, to well-intentioned amateurs with no idea how to do the job, to the occasional stranger-than-fiction episode–such as the saga of Melanie Mills a.k.a. Lisa Hackney (a multiply-aliased faker who staged her own death in order to steal money from clients and turned out to be wanted for attempted murder) and the hoax perpetrated by Christopher Hill (who fabricated publisher submissions, comments, and even contracts in a massively complicated scheme to deceive clients).

But times have changed. Major shifts in the publishing world have created alternatives to the traditional get-an-agent-to-land-a-publisher route to publication. With agents no longer the be-all and end-all of a writing career, it’s become a lot tougher for a scam agent to make a living. As a result, literary agency scams have become rare. Even amateur agencies are much less common than they used to be.

They’re still a potential danger, though, so when I stumbled across AMS Literary Agency, a new venture (domain registered only last month) with a ton of red flags, it seemed like a good subject for a blog post. When I started writing, I thought I’d just be doing an expose on an amateur agency. What I actually found is…more complicated. 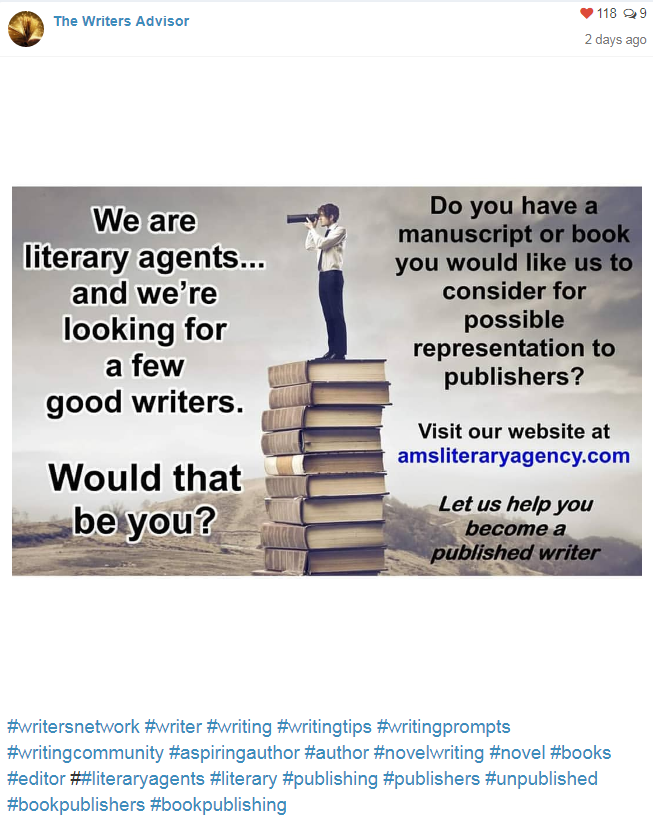 No agent names or bios. Reputable agencies list their staff. If you don’t know who the agents are, you have no way to tell whether they’re competent.

No client list or list of sales. Again, this is data that’s front and center on reputable agencies’ websites (among other things, it’s a way of advertising their success). Of course, a new agency that’s still recruiting clients and pursuing sales may not have anything to list yet (which is another reason why it’s important to know who the agents are and whether they’re qualified). But AMS’s privacy policy suggests that it never will provide this information:

I’m no expert on Canadian privacy laws, but authors’ names and book titles are hardly confidential information–publishers would face quite the challenge if they were–and other Canadian literary agencies don’t seem to have a problem disclosing clients and sales. Invoking confidentiality makes it equally possible for AMS to say anything or nothing, and impossible for writers to verify either way–very convenient, if an agency is placing books with unsavory publishers, or not managing to make any sales at all.

Perpetuation of a myth about copyright. This is what’s known as “poor man’s copyright”, and it’s bunk. Any genuine publishing professional should know better.

As mentioned above, AMS’s website and social media don’t identify any staff members…but here’s a name, from a text exchange with a writer who inquired about submitting:

If you were around for the early days of Writer Beware, that name may ring a bell. Don Phelan (full name: Donald Thomas Phelan) was the CEO of notorious vanity publisher Commonwealth Publications of Canada, which bilked hundreds of writers out of millions of dollars in the mid- to late 1990s, and was the subject of a massive class action lawsuit that resulted in a $10,000,000 judgment on behalf of defrauded authors (none of which was ever paid). After Commonwealth closed down, Phelan and his wife started a ghostwriting business that also was the subject of complaints, and later went out of business.

You can read all about it at the Writer Beware website.

Could this possibly be the same Don Phelan? I’m always cautious about making assumptions, so I put it down to coincidence. Surely it was more plausible to assume that there were two Don Phelans than that the perpetrator of one of the most expensive publishing scams ever would show up 20-plus years later at the head of a brand-new literary agency.

Then I found this, in the Visitor Posts section of AMS’s Facebook page:

My first reaction was that if either were still alive, both Cartland and her long-time agent, Doreen Montgomery of Rupert Crew Limited–the agency that represented Cartland throughout her career and still does–might be startled to learn this. And yet…another bell was ringing. Didn’t Commonwealth at one point re-publish some of Cartland’s backlist? Or was I mis-remembering?

I googled, and sure enough, found this rather snarky account in the September 29, 1997 issue of The Independent:

A breathless press release has arrived from across the water. “Looking to establish itself among the top romance publishers, Canada’s Commonwealth Publications proudly announces the recent signing of `the world’s most published romance author of all time’.” On Valentine’s Day next year, the company will launch Dame Barbara Cartland’s 24-book Classic Romances series, “twelve previously released classic novels and twelve new, previously unpublished, heart-warming romantic tales”. Among them: her “critically acclaimed” novel Enchanted. The notion that Cartland could help “establish” a publisher – let alone one whose alleged intent is to showcase “young and talented first-time authors” – suggests Commonwealth is perilously out of touch. For years, even Mills & Boon has politely declined to publish Cartland, whose audience is to be found only in such places as China, India and Russia.

Enchanted, the novel mentioned, was indeed published by Commonwealth. I couldn’t find any others.

That’s not the only Phelan/Cartland/Commonwealth past-present connection. In 1997, Commonwealth published a commemorative biography of Princess Diana, with much ballyhoo over the foreward by Barbara Cartland. Here is the very same book, re-published as an ebook in 2017–with the identical cover–by Donald T. Phelan.

Instead of an inflated lie, could AMS’s claim in the visitor post be the literal truth? Donald T. Phelan did work with Cartland. And he certainly “handled” (in the sense of “took loads of money from”) hundreds of “other authors”. Could AMS Literary’s Don Phelan actually be Commonwealth’s Don Phelan, back in the writer biz after more than 20 years?

I received this response the next day:

Why, indeed. Some back and forth ensued, with me continuing to (politely) ask questions, and AMS continuing to (brusquely) refuse answers. Eventually they decided they’d had enough:

Bottom line: Don Phelan or no Don Phelan, there are abundant reasons to regard AMS Literary Agency with caution, just based on the many red flags at its website.

UPDATE 3/1/19: AMS has deleted from its Facebook page the visitor posts mentioned above. Lucky I took a screenshot, eh?