In December 2011, I wrote a blog post about a Turkish publisher called Arvo Basim Yayin, which was contacting self-pubbed and small press authors out of the blue and offering to buy Turkish rights to their books.

Arvo signed up at least ten writers as a result of these approaches, some with multiple books (those are only the writers whose names I know; according to my sources, there are probably many more). Both royalty-only and licensing-fee-plus-royalties contracts were offered; the licensing fees ranged from hundreds to thousands of dollars, depending on the number of books involved. Publication was supposed to begin in September.

Some of the books have indeed been published. But others have missed multiple publication dates–and it appears that no one, including the authors whose books were published, has been paid.

Authors who’ve attempted to contact [Arvo] about the problems say they’ve gotten a raft of excuses–financial difficulties, personal and family ill health, religious holidays, trips out of town–along with repeated promises that schedules would be straightened out and monies owed would be forthcoming. As of this writing, none of those promises have been fulfilled.

I emailed Arvo myself to ask about all this. It readily admitted to the problems, offering a familiar excuse–financial difficulties–and a novel one–broken printing machines–to justify them, but claimed that everything was being addressed and payments and publication were imminent. Over the following months, however, no checks arrived and no books appeared, and authors who tried to follow up were fobbed off with the same bogus-sounding excuses.

The last I heard of Arvo was a July 2012 update from an author whose books actually were published, but never paid for. This author never even got their author copies, despite being told multiple times that the books were on the way.

So why am I writing about a deadbeat publisher from 2011? Because it appears to still be in business, and has once again started recruiting writers, under a different name.

Over the past couple of weeks, I’ve heard from three self-pubbed authors who’ve been approached (with identical emails) by editors from Mavifil Yayinlari (Mavifil Publishing), offering to purchase Turkish rights to their books. The offer: translation and 8% royalties on the first 1,000 books. This is the same offer that was made by Arvo; the out-of-the-blue solicitations are also the same. But there’s more. 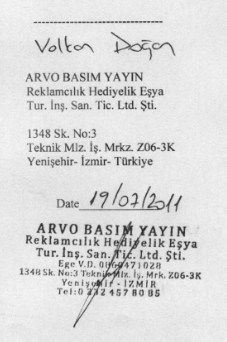 Mavifil is a children’s publisher, described by the editor as a “new” “subsidiary company” of another publisher, Pagoda Publishing. Pagoda appears to include three imprints: Pagoda, Mavifil…and Arvo. On the Pagoda website header (which appears at the top of this post), the Arvo logo is different from the original one that you can see above–but the covers of a large number of the company’s published books display that original Arvo logo. Also, I recognize many titles by authors who contacted me in 2011.

Additionally, Volkan Dogan, Arvo’s Manager or Editor in Chief (I’m not sure of his exact title), who signed Arvo contracts in 2011, shows up on a websearch as Pagoda’s Editor in Chief, including on LinkedIn. His name also appears on some of the contact emails Mavifil has sent out.

It’s pretty clear that Mavifil is part of a publishing company run by the same person or people who ran Arvo in 2011–a publishing company that continues to sell books from authors who, in 2011 and 2012, reported not being paid. Were the missing payments ever remitted? Could Mr. Dogan and his enterprise have cleaned up their act and conquered the problems they were having in 2011? It’s possible. But the history here is sufficiently troubling that I think a strong caution is in order about all three of these imprints: Arvo, Pagoda, and especially Mavifil, given that it’s actively soliciting writers.

As an additional concern, Mavifil doesn’t appear to have published anything yet. Three books on the company’s website sport the Mavifil elephant logo, but per my research, two were originally published by Pagoda, and one has no web presence at all. Also worth noting: in extended discussion with one of the authors who contacted me, Mavifil’s editor did not appear to be familiar with the concept of an advance.

UPDATE 3/29/19: Since putting this post online, I’ve heard from two more authors who’ve been solicited by Mavifil. Both received identical solicitations, as well as identical responses to “tell me more about you” questions. The company seems to be relying heavily on canned emails, possibly because of the language barrier.

Also, Pagoda Publishing’s homepage link was returning 404 messages for a while. Coincidence? Maybe. The link to its published books still works, but here’s a screenshot, just in case. 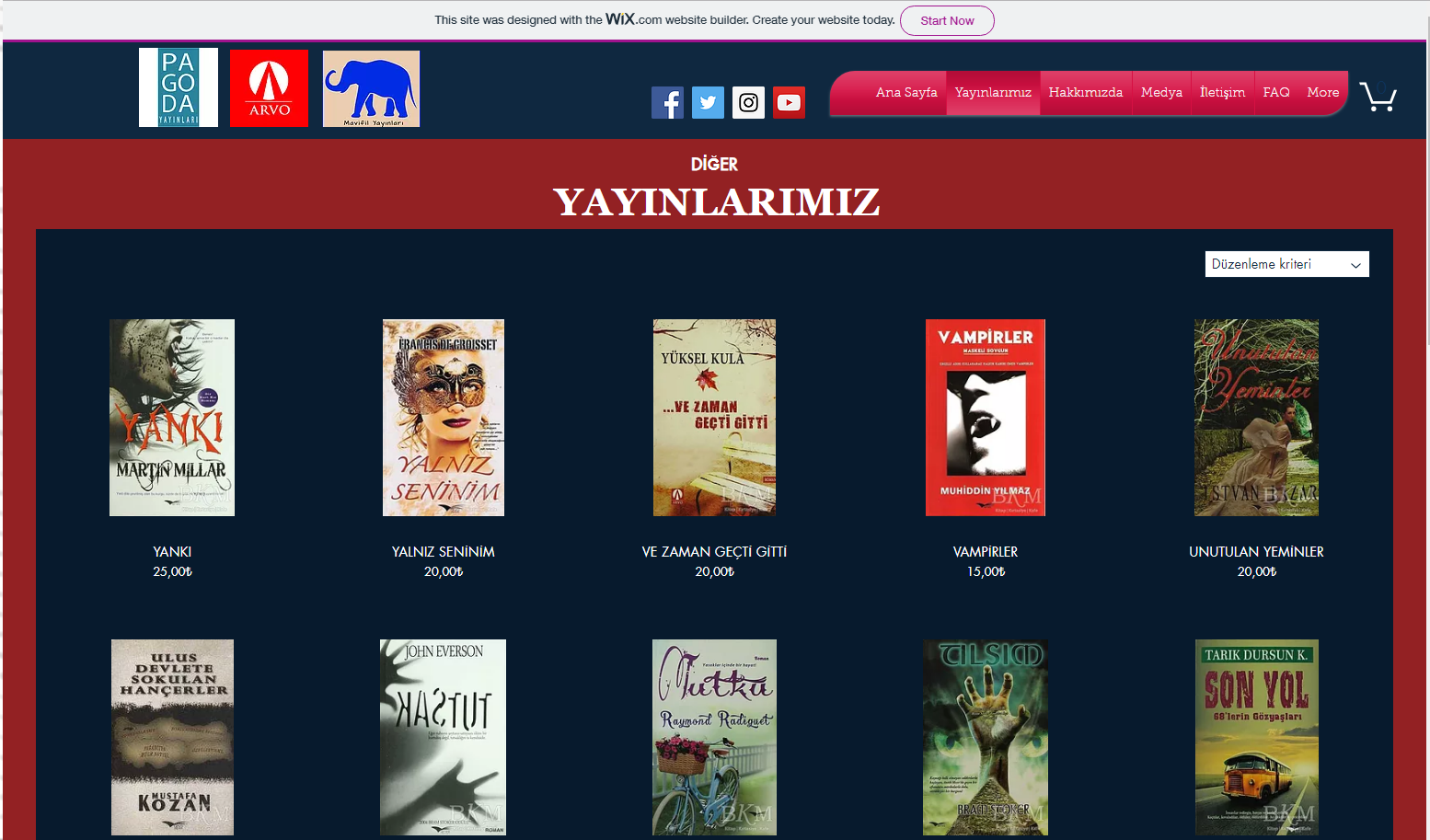 I’ve also now seen one of Mavifil’s contracts. To say it’s rudimentary is a giant understatement. See below. Beyond the poor English, there are many important things missing, including a grant-of-rights term, a payment schedule for royalties, assurance of a “faithful and accurate” translation, assurance of a copyright notice in the author’s name, provision for rights reversion if the publisher fails to comply with the agreement–just to name a few. 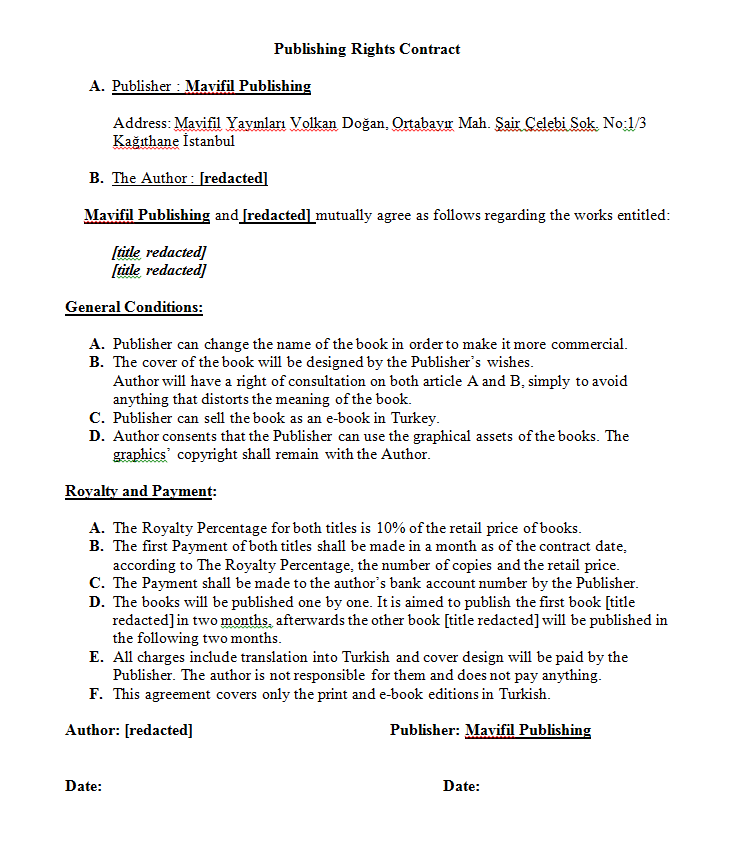 UPDATE 3/31/19: I reached out to several of the writers who contacted me in 2011 about Arvo. I’ve heard back from one of them so far, who confirms that they were never paid for the multiple books “purchased” by Arvo (and still on sale from Pagoda). So I guess that answers the question about whether the company has cleaned up its act.

Awards Profiteers: How Writers Can Recognize Them and Why They Should Avoid Them