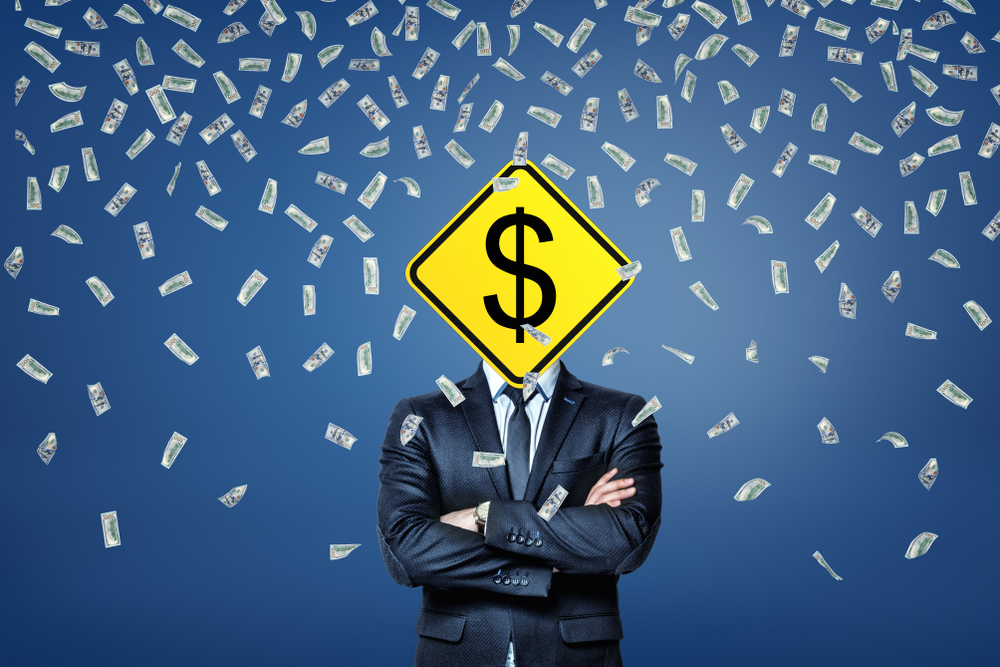 Lately I’m seeing frequent ads on Facebook for high-entry fee literary awards, such as the International Book Awards ($89 per entry, though if you enter by April 30 you can get a special early bird rate of $69). It’s sponsored by American Book Fest (formerly known, at various times, as USA Book News, JPX Media, and i310 Media Group), which also runs the Best Book Awards, the Bookvana Awards, and the American Fiction Awards–all with the same huge entry fees.

I’ve also heard from a number of writers who’ve been directly solicited by a similar high-entry fee awards program, the Book Excellence Awards: 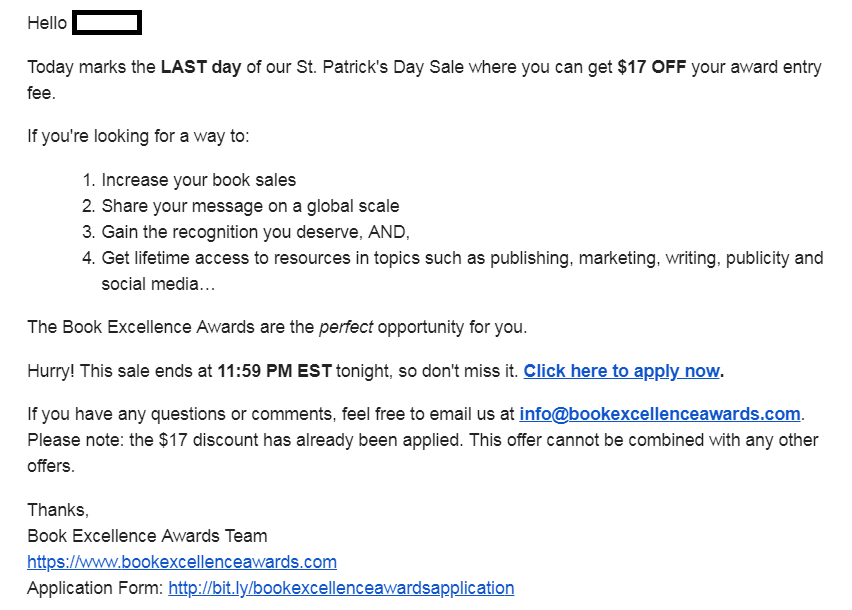 Legit awards don’t solicit, and they certainly don’t offer special sale prices (the pre-sale amount is a whopping $110). The Book Excellence Awards are run by Literary Excellence Incorporated, and as yet are the only awards program offered by that company–but I’m sure that will change. Profiteering awards often come in clusters.

So what is a profiteering award? Why are such awards a “beware”? Read on. What follows is a post I originally put online in 2015, but is still very relevant today. I’ve updated it to reflect changes in prices and details, and also to add some newer profiteers that have sprung up in the past few years.

If you’ve been reading this blog for any length of time, you may have guessed that I’m not a big fan of writing contests and awards.

Partly this is because so many are a waste of time, with minimal prizes, negligible prestige, and little or no name recognition. Why not spend your energy on something that can get you closer to building a readership–submitting for publication, or publishing on your own?

There’s also the risk of bad things in the entry guidelines–for instance, the My Best Story Competition, where the grant of publishing rights is extended to any “third party” obtaining a copy of the entry. Writers who don’t read the fine print carefully enough may find themselves trapped by such provisions.

And then there are the contests/awards with a hidden agenda: making money for the sponsor. Such awards aren’t really about honoring writers at all.

There’s a complex of red flags that identifies profiteering contest and awards programs.

– Solicitation. To maximize entries, profiteering awards and contests often solicit entries. An out-of-the-blue email, or an ad on Facebook, urging you to enter a contest or awards program should always be treated with caution.

– High entry fees. Profiteers charge $60, $75, $100, or even more. There may be “early bird specials” and multiple-entry discounts to tempt authors with the illusion of a bargain. And that’s not counting the books you’ll have to send for award consideration–a considerable expense, if the profiteer only accepts print.

– Anonymous judging. Profiteers promise expert judging by people with standing in the writing and publishing field, but don’t reveal the identities of these purported experts. In fact, the judging may be done by the profiteer’s staff, who may simply pick winners out of a hat. One of the things that lends credibility to a contest or award is the prestige of its judges…which is why you always want to know who they are, and should always be suspicious if that information is not provided.

– Non-prize prizes. To avoid cutting into their profits, profiteers offer prizes that cost them little or nothing: press releases, media announcements, database and website listings, features on satellite websites or in self-owned publications. Some offer little more than the supposed honor of winning the award.

Profiteers may deviate from this template to some degree: some do provide money prizes, for instance, and not all of them solicit. But if more than four of these red flags are present in a contest or awards program–especially if the entry fee is above $50–you should think very carefully about entering.

What about prestige? Profiteer awards and contests don’t typically command a lot of (or any) name recognition, but if you win or place, you’ll be able to tag your book as an “award-winning book” and yourself as an “award-winning author.” This is often touted by the profiteers as a major benefit for winners and finalists. How much readers care about such designations, though, is an open question–especially where they’ve never heard of the award or contest. Do you really want to risk losing a $75 or $100 entry fee for that?

Profiteer awards and contests overwhelmingly target and ensnare small press and self-published authors. It’s not uncommon to see books that sport several of these awards, in some cases representing an outlay of hundreds of dollars–and that’s not counting the awards the authors may have entered and lost. But such awards are nothing more than a cynical play on authors’ hunger for recognition and exposure in an increasingly crowded marketplace. They are never a worthwhile use of writers’ money.

The Alliance of Independent Authors provides ratings for dozens of awards and contests, with Caution notices for those that are suspect. It’s a good list to check before submitting.

Some examples of awards/contest profiteers:

– JM Northern Media runs more than 20 literary “festivals” and conventions. JM Northern is a ferocious spammer; if you’re a writer, you’ve probably been solicited for one or another of its festivals.

Unlike many other profiteers, JM Northern offers actual money prizes. But it can afford to. According to an article in Examiner.com that’s no longer accessible online, JM Northern’s Hollywood Book Festival received 2,740 entries in 2012. At $75 per entry, that’s a gross of $205,500. Let’s assume that the other 20+ festivals, most of which have a lower fee of $50, also get a lower number of entries–say, 1,500 (I’m lowballing to demonstrate how insanely lucrative this scheme is). Altogether, that’s over $1.5 million just in entry fees. A year. When you add in revenue from the critiques and merchandise (likely provided by JM Northern’s own Modern Media Publicity), it wouldn’t surprise me to learn that JM Northern’s annual festival gross is well over $2 million.

Even among profiteers, Jenkins is unusual in the amount of extra merchandise it hawks to winners. For instance, check out the options for Moonbeam Award winners–no fewer than 35 items, ranging in price from $5 (for a “Certificate Presentation Folder”) to $130 (for a Moonbeam Gold Medal–not even a real medal, just an image) to $1,423 (for a marketing” package that includes such junk marketing services as book fair display and press releases).

– The National Association of Book Entrepreneurs (NABE), which claims to have been in business for 32 years, sponsors the Pinnacle Book Achievement Awards. The $90 entry fee includes NABE membership (the benefits of which are unclear), and there are more than 50 entry categories. The prizes–press releases, mentions on the NABE website and in its “bookselling magazine”–are a prime example of how profiteers maximize profit by offering prizes that cost them little or nothing to provide. There’s also the usual opportunity to order stickers and “beautiful Certificates”.

– WILDsound, another prolific spammer, runs continuous monthly contests and “festival events” for screenplays, books, poetry, short stories, and more. Fees range from $25 (“$10 OFF regular submission”) for a first scene to $170 for a full novel, but average around $45. Judging is done by the usual cadre of unnamed “Professional Writers and Writing Consultants”; prizes are readings by–it’s claimed–professional actors. You can sample these poor-quality videos here.

– Readers Favorite touts an array of tempting possible benefits for winners of its annual book award, including a read by a film company, consideration by an independent publisher, and evaluation by a literary agent. Interestingly, though, there’s nothing to suggest that any authors have been picked up as a result.

Prizes for this award are a bit more prizelike than those offered by many profiteers, with an awards dinner and a free roll of stickers (any more, though, and you’ll have to pay). Otherwise, it’s the usual cheap junk: press releases, book fair display, a website listing. Entry fees, which will run you $99 to $119 depending on when you register, are maximized by the more than 140 entry categories. And that’s not the only way to spend money. You can also buy a book review, or purchase “expert” writing services–all provided by people who are unnamed, and therefore unverifiable.

Readers Favorite, which actively courts writing- and publishing-related businesses like BookBaby and advertises its award via, among other things, an affiliate program that pays 20% for successful referrals, is one of the higher-profile profiteers. Along with countless authors who could have found a much better use for their money, some celebrities have fallen for it.

– Literary Classics runs the International Book Awards ($88 entry fee, 31 entry categories), as well as the Top Honors Children’s and YA Book Awards (Enchanted Page Children’s Book Award, Eloquent Quill Award, Lumen Award for Literary Excellence, and Words on Wings Young Adult Book Award–at $48 per entry, relatively inexpensive for a profiteer). Judging is by an unnamed “selection committee”. There’s an awards presentation, as part of a related book festival, but other than that, all winners get is a certificate and a “digital award seal”–and, of course, the opportunity to buy stickers and medals.

– Smarketing LLC runs a trio of awards, all of which were originally founded by book shepherd Ellen Reid: the  Body, Mind, Spirit Book Awards ($75 per entry, over 50 categories); the National Indie Excellence Awards ($75 to enter, over 150 categories); and the Beverly Hills Book Award ($75 per entry, over 150 categories). Like other profiteers, none of these awards programs names its judges (“to respect their privacy”) and all sell stickers, certificates, and medals.

For all three awards, the main prize is “exposure”, via press releases and website announcements (and we all know what, in most cases, “exposure” is worth). Each award also includes one or more donated prizes for one or more select winners. In other words, none of these prizes cost the sponsor a penny. Talk about maximizing profit.

Interestingly, the National Indie Excellence Awards (though not the other two) has this proscription:

– Reader Views, a.k.a. Book by Book Publicity, sponsors the Reviewers Choice Annual Literary Awards, which will set you back $89 per entry into any of its more than 50 categories. Prizewinners get a seal and a certificate, with select prizewinners eligible for more–primarily, features on Reader Views and Book by Book Publicity websites and publications, as well as some donated prizes (in other words, they involve minimal cost). Judging is done by Reader Views reviewers (Reader Views sells reviews as part of its publicity packages)–none of whom are named.

– Global Ebook Awards capitalizes on the name of Dan Poynter, one of the original pioneers of self-publishing. Entry costs $79, with over 100 entry categories. A whole section of the website discusses judging and judges–but (surprise!) provides no actual names or bona fides. As with so many other profiteers, the prize is “exposure”, via press releases and website features: cheap for the awards program, negligible for the winners. And of course, winners are “eligible to purchase Global Ebook Award certificates attesting to their honor”.

How Predatory Companies Are Trying to Hijack Your Publisher Search, Part 2