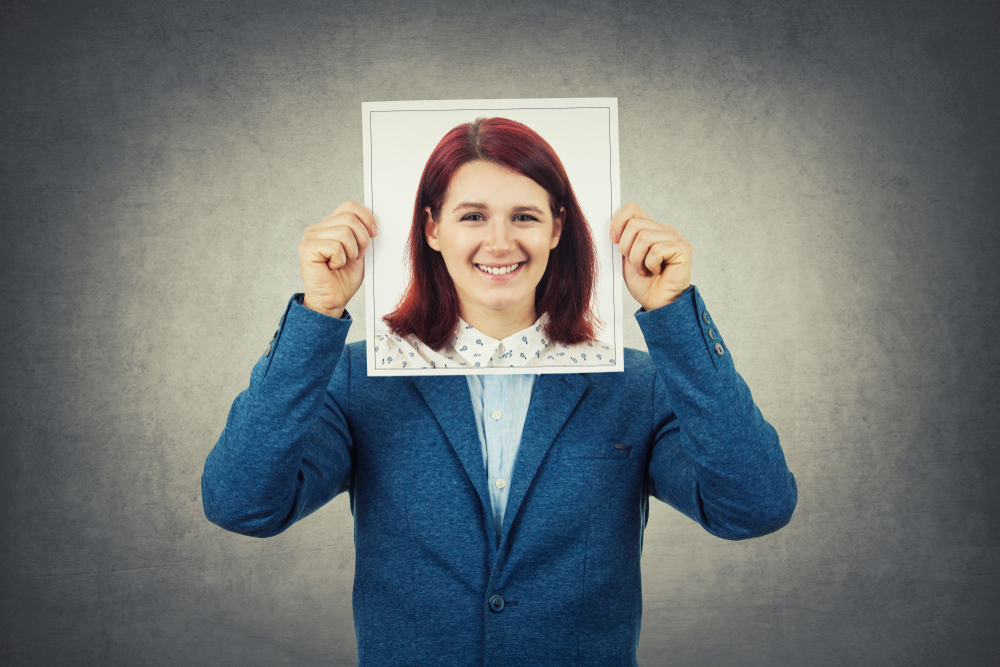 I can claim, for instance, to be a well-known literary dog…er, agent, and as long as I put a little effort into the subterfuge, and only make the claim to people who are likely to want to hear from someone like who I’m pretending to be, at least a few of my targets will take me at face value.

One of the most common tactics used by scammers is solicitation, by phone and email. To make themselves seem more reputable and attractive, scammers often masquerade as dogs…that is, they try to impersonate real, reputable companies and individuals.

Sometimes the impersonation is just a vague (and therefore unverifiable) claim of industry expertise.

Sometimes it’s a claim to be working with reputable companies (the scammer in this case is the little logo on the left):

Sometimes it’s a claim to actually be a reputable company. Note the strategic use of the Hachette Book Group logo (the scammer is the supposed partner): 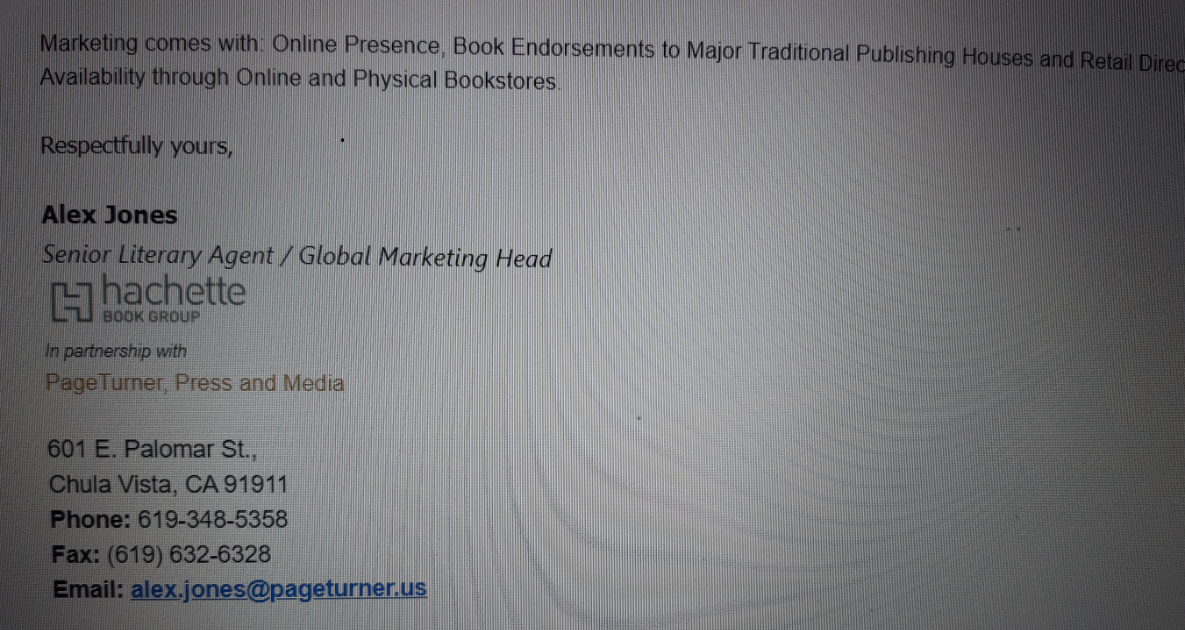 And sometimes the deception is more elaborate. Last week, Donald Maass of the Donald Maass Literary Agency posted this warning: 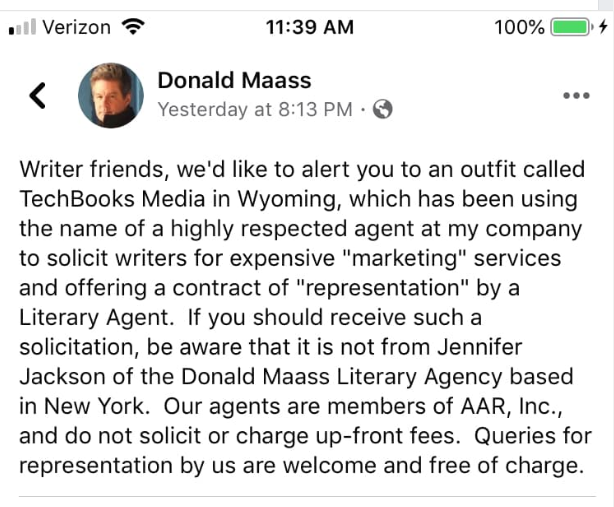 Don was kind enough to share the solicitations with me. Here’s the first. The English is passable, but note the typo. Also note “Jennifer Jackson’s” email address, which on a websearch doesn’t match anything connected to the real Jennifer Jackson. 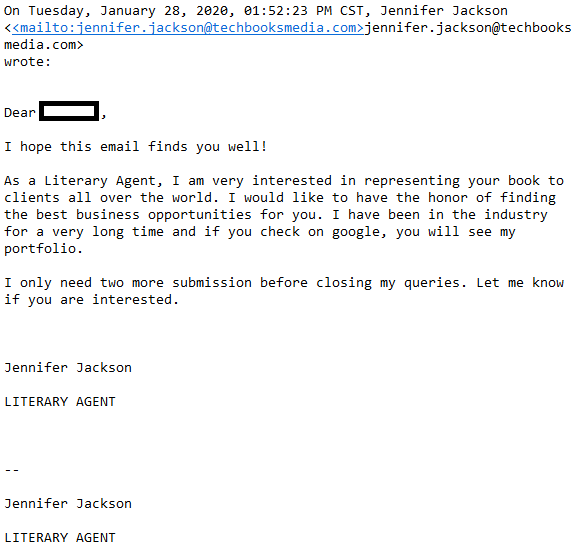 Here’s the second solicitation, received after the author responded. The grammatical and other errors are much more obvious here, and if that’s not enough to prompt caution, the next to last paragraph, with its demand for money, should be: 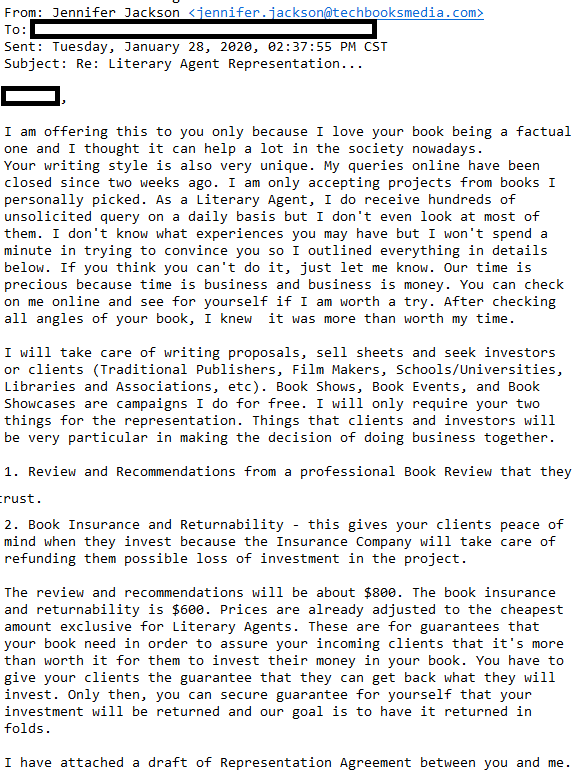 Techbooks Media, whose domain name was only registered a few weeks ago on January 15, sells a range of junk marketing at insanely inflated prices (for instance, placement in PW Select, which actually costs $149, for $699; or a Kirkus Indie review, which actually costs $575, for $1,699). Putting this together with the blatant deception, the ESL mistakes on the website and in the emails, and inside info from one of my confidential sources, Techbooks Media is certainly another of the Philippines-based marketing scams listed in the sidebar. Accordingly, I’ve added it.

1. Proceed from a point of skepticism. An unsolicited contact from a real, reputable agent or publisher isn’t automatically suspect, but it’s rare. Out-of-the-blue contacts are far more likely to be illegitimate. Caution is definitely in order.

2. Mistrust–and verify. Google all the individuals and/or companies that are mentioned (are there complaints? Have they shown up on this blog?) If someone claims to have worked for a major publisher or agency, or a company claims to have placed books with reputable publishers or to have sold film or other subsidiary rights, see if you can verify the claim. If you can’t, or if there are no checkable details (such as names or book titles) attached to the claim, be wary.

3. Use your common sense. Anyone can make an occasional typo, but professionals communicate professionally (no reputable agent would send out grammar-challenged emails like the ones from “Jennifer Jackson”). Check the email address and any links–do they match the person or company claiming to be contacting you? (There’s nothing to connect Ms. Jackson with anything called Techbooks Media.) If there’s a demand for upfront money, be sure it’s a service or company that customarily charges such fees (reputable agents and publishers don’t).

4. Contact Writer Beware. Always a good default if you aren’t sure about an individual or company. We may have heard something, or received complaints, and if we have, we’ll let you know.

A surreal and ghastly experience. Someone has been contacting authors and taking my name (and my agency’s name) in vain. Some details of what’s been happening (and more): https://t.co/0M2HXf9E9V

I’ve personally been in contact with many of the authors that have reached out to DMLA. They’ve been generous and understanding. It’s just broken my heart to hear them recount having an opportunity like this extended under false pretenses.

The more I’ve heard, the more horrid I’ve felt. While these authors are the targets, this person is also using me and my agency to exploit their hopes. Part of me feels like a victim too.

One of these authors told me they were sick of the corruption in publishing. Our whole industry gets hurt by things like this.

Offers of rep are exciting – for both authors and agents. It can be heady and wonderful. It’s okay to pause. It’s okay to ask questions. People who really believe in you will give you time to do that.

UPDATE: According to additional documentation I’ve received, Techbooks Media is also doing business as Chapters Media and Advertising. Payments are made to Chapters, and Chapters’ name is on the service agreement that Techbooks victims sign.

Here’s the payment request that “Jennifer Jackson” sends out to prospective victims: 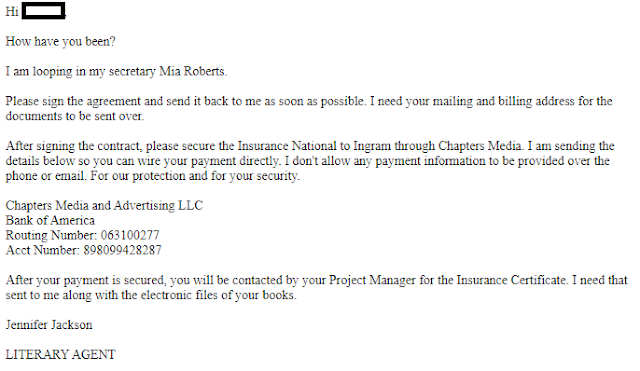 Chapters Media and Advertising has business registrations in several states, including Wyoming and Florida–though not in Nevada, where it purports to be located. It’s registered as a “foreign LLC”, and guess where officer Mark Rosario lives: 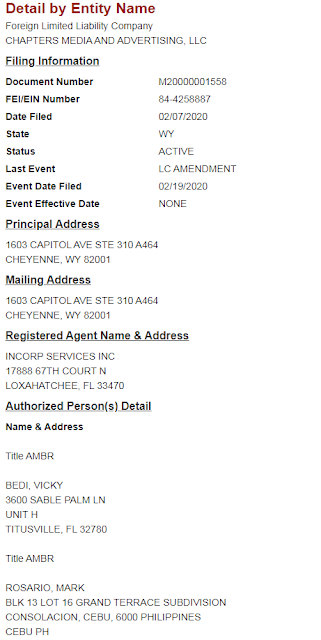 UPDATE 5/27/20: The scammer is still at it. This is basically the same solicitation they sent out in January.

UPDATE 8/13/20: Yet another impersonation scam is targeting Danielle Burby of Nelson Literary. Also see the comments section, for comments from other writers who’ve been targeted by “Jennifer Jackson.”

Should You Pay To Display Your Book At BookExpo? (Short Answer: No)