HBO’s buzzed-about new series Lovecraft Country has spawned a short story contest: For the Love of the Craft.

Co-sponsored by HBO and The Root, the contest invites writers “to pick a decade or an important moment in Black American history, and weave a tale of the monsters that litter that time.” There’s a $5,000 prize for the winner, along with publication of their story on The Root and mentoring from writers on the show. The submission deadline is September 18.

As always, the devil is in the details. In this case, as so often with writing competitions, that’s the official contest rules. (These are only accessible via Submittable, and you must have an account.) Here’s the passage that concerns me: 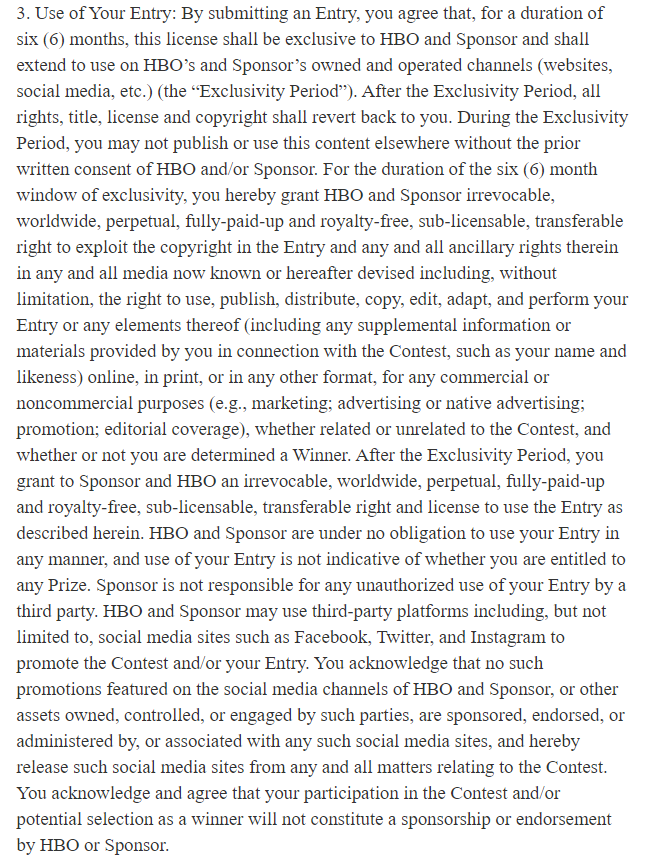 To break the small-print legal language down:

All of this is, no doubt, intended to allow HBO and The Root to market and publicize the contest, rather than to engage in the wholesale theft of rights. Nowhere in the contest description or rules is it indicated that any entries other than the winner’s will be published. On the other hand, nothing in the rules prevents The Root from publishing entrants other than the winner–or bars HBO from, for instance, turning an entry into an episode. And remember, the license is “royalty-free.”

Bottom line: I don’t suspect nefarious intent here, but this is a very sweeping license, and there are potential unforeseen consequences. You need to be sure you understand what you’re agreeing to here, and are comfortable with all that it implies.

This is mentioned in The Root’s contest announcement as well: “We’ll retain the rights to your story for six months, after which the rights revert back to you.” So while the license you’ve granted to your intellectual property is very expansive, it is also time-limited (note: the license does not include an explicit grant of copyright). Where publication is part of a prize, contest sponsors often require a temporary grant of rights to cover the judging period, so that entrants’ works will still be fully rights-available by the time the winner or winners are chosen. That’s acceptable as long as the grant expires as soon as the winner is announced (and, of course, as long as you’re okay with your rights being tied up for that period of time).

Say what? Didn’t the rules just state that all your rights revert back to you once the six-month exclusivity period is up? How can the contest sponsors be claiming those exact same rights–a claim that, don’t forget, is irrevocable and perpetual and applies to every single entry—at the exact same time as they’re apparently relinquishing the very same claim? The one should cancel out the other. If your rights have returned to you, the sponsors shouldn’t be claiming them. If the sponsors want a perpetual claim on your rights, why include reversion language at all?

I have no idea what’s really going on here. It’s always possible that the post-exclusivity rights claim is a careless mistake of wording: a bit of legalese that slipped past the proofreader and shouldn’t have been included. Or maybe the second rights claim is meant to be non-exclusive, and that word just got left out. If there is error, I hope HBO and The Root will promptly address it (The Root also needs to take a look at its contest announcement, which encourages writers to believe their rights revert after six months.)

At the very least, though, the rules for this contest currently include a major ambiguity that raises a number of questions and could potentially have serious consequences–most concerning of which is that, per the literal wording of the rules, simply entering the contest entails a perpetual and irrevocable–and apparently exclusive, since nothing states otherwise–grant of rights to your entry, whether you win or not.

Also worth noting: there’s nothing in the rules to guarantee that publication of the winning entry will carry the winner’s name, and the Dispute Resolution clause, which bars class action, also bars disputants from claiming anything other than “actual out-of-pocket expenses (i.e. costs associated with entering this Contest)”.

UPDATE 9/7/20: .The Root’s contest announcement states this, which is misleading, for the reasons outlined above:

Shouldn’t The Root, or its parent company, want to provide accurate information to would-be contestants? Apparently, not so much. I’ve left this comment on the announcement page twice, once on 9/4 and once on 9/5:

Neither comment has been approved. When I checked just now, they were both still “pending” (for comparison, several articles posted more recently than the contest announcement have numerous approved comments.) Nor has the misleading claim about rights been corrected.