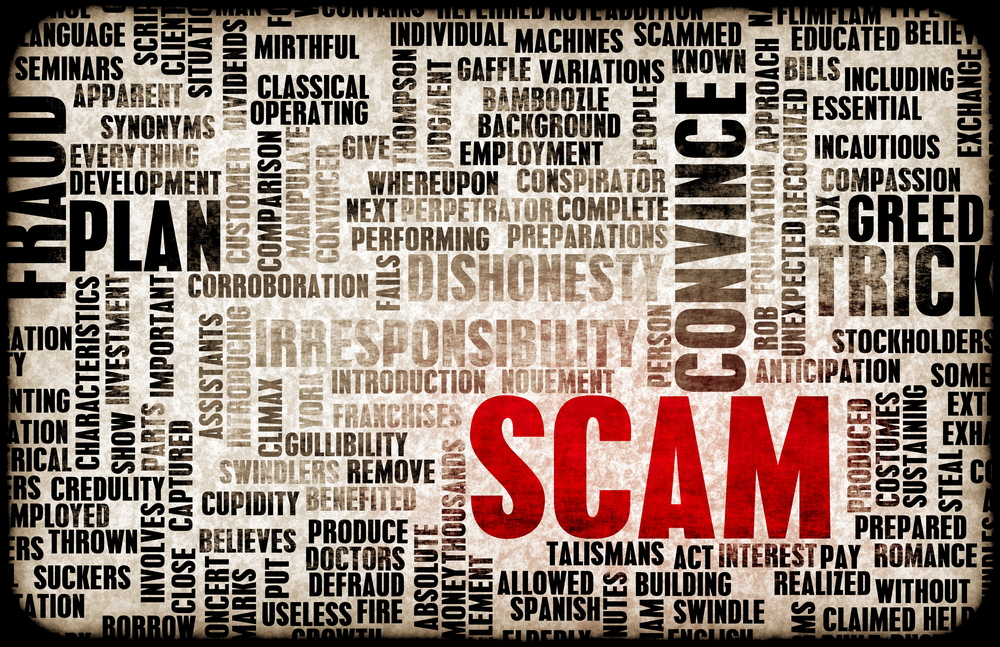 A couple of weeks ago I wrote about scammers impersonating reputable literary agents. These are not isolated incidents: I have a growing file of reports and complaints about this growing phenomenon–including from writers who’ve lost large amounts of money.

Now publishers are being impersonated as well. Here are a couple of examples of the kind of thing I’m seeing.

Here’s the pitch one author received from “Michael Smith” of “HarperCollins” (see the email address): 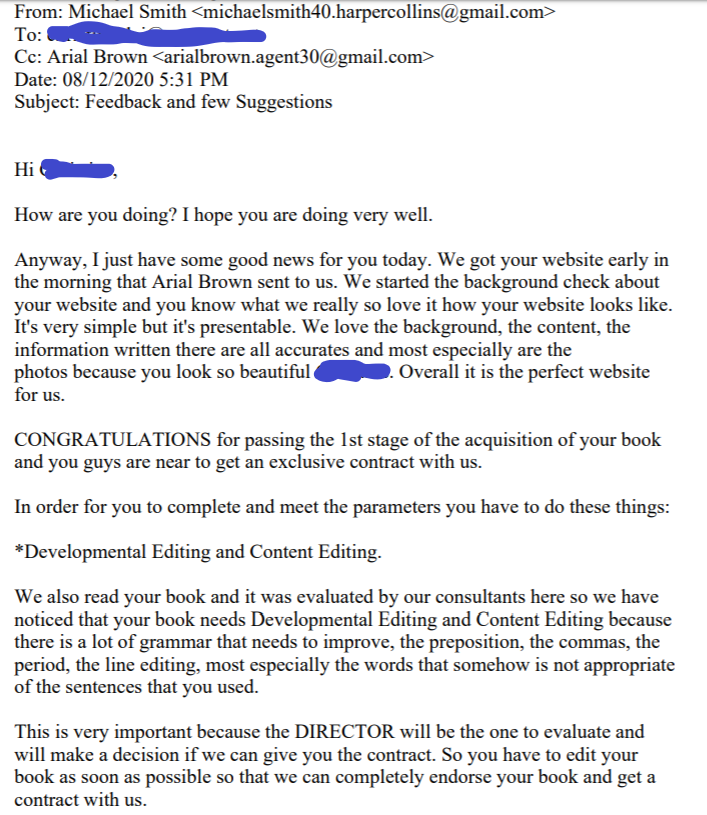 To pass the “1st stage of the acquisition” of their book, and move on to “an exclusive contract,” the author had already been persuaded (by “agent” Arial Brown, who is as fake as this offer) to hand over more than $8,000 for a new website and YouTube video. Now, in order to proceed to the next stage, they must shell out still more cash for “Developmental Editing and Content Editing.” But not to worry–all that spending is in aid of big rewards down the line:

Who wouldn’t want a HUGE of money? There is, however, plenty wrong with this picture. First, HarperCollins doesn’t use gmail (here is its email format). Second, it doesn’t demand that authors pay for services as a pre-condition of a contract offer. Third, anyone can make a typo, but someone working for a major English-language trade publisher can reasonably be expected to write proper English–which is definitely not the case in the excerpts above. Fourth, major publishing houses, which are rigorously selective, are unlikely to consider manuscripts with multiple grammar errors and poor word use.

That’s right–it’s another Philippines-based publishing and marketing scam. Due to the tangled web of purported agents, web designers, and publisher representatives (as well as the author’s understandable confusion), I wasn’t able to determine which one. But the provenance is clear.

Here’s a second HarperCollins impersonator. This one has taken more trouble to fake things up: 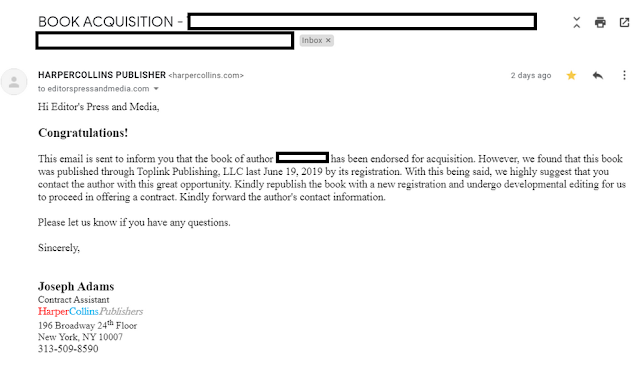 Editor’s Press and Media is (surprise!) another Philippines-based scam (see the list in the sidebar). This is clearly a setup to enable it to soak the author for large amounts of money to re-publish and edit their book, after which the supposed offer from HarperCollins will mysteriously evaporate.

Even if one didn’t know all that, though, there’s enough wrong here to ring warning bells (though many authors, dazzled by what appears to be an offer from a major publisher, will not hear them). Publishers prefer manuscripts that haven’t been published before–but if they do consider taking on an already-published book, they won’t demand that it be re-published so that they can then publish it a third time (this makes absolutely zero sense).

Additionally, offers of publication aren’t typically relayed by contract assistants, and smaller lapses (it’s HarperCollins Publishers–as in the logo “Joseph” has appropriated in his signature–not HarperCollins Publisher–as in the email heading) also give the game away. Not to mention: would a staffer for HarperCollins, with its New York City address, really have a Detroit phone number? (Yes, I know that people work remotely–especially these days–but still.)

(Curious, I called the number, and got an American-accented voicemail message from “Joseph Adams with HarperCollins” inviting me to leave a message–an unusual degree of base-covering for these scams, which heavily rely on their victims not checking up on them.)

Penguin Random House is also a target for the scammers, and doubtless so are other publishers I haven’t heard about yet. Bottom line: an offer from a reputable publisher should not be contingent on you spending money, plus it will most often come via a reputable literary agent who hasn’t charged you any fees either.

If it seems too good to be true, it often is.

As always, if you have questions about any offer you receive, or any service you’re offered, contact Writer Beware.

UPDATE 9/14/20: Here’s another fake HarperCollins offer from Editor’s Press and Media, for a different author and book.

UPDATE 2/24/21: Picador (an imprint of Pan Macmillan) is the newest impersonation target.

UPDATE 2/27/21: Writers are getting solicitations from Jade Freeman of Stephenson and Queen, which claims to be “under” Thomas Nelson (of course, there’s no such imprint). Offered is re-publication and “endorsement to traditional publishers”, at a cost of around $6,000. The offers I’ve seen are identical in parts to similar republication-and-endorsement offers from other scammers, including Book Art Press, Bookwhip, and BookTimes.

– Offers for “bookstore placement” in several Asian countries (cost: $1,500), using the name of HarperCollins editor Mary Gaule and the it-should-be-obvious-it’s-fake email address editorharpercollins@gmail.com (if real, the email address would be @harpercollins.com)

– Scammer Silver Ink Literary Agency is using the name of a HarperCollins contracts specialist on bogus offers–from Penguin. The claim is that Penguin “is now accepting book titles in exchange for an upfront pay [for editing] and continuous royalties.” Here are the supposed new guidelines–note the use of PRH logos and the PRH “watermark”: 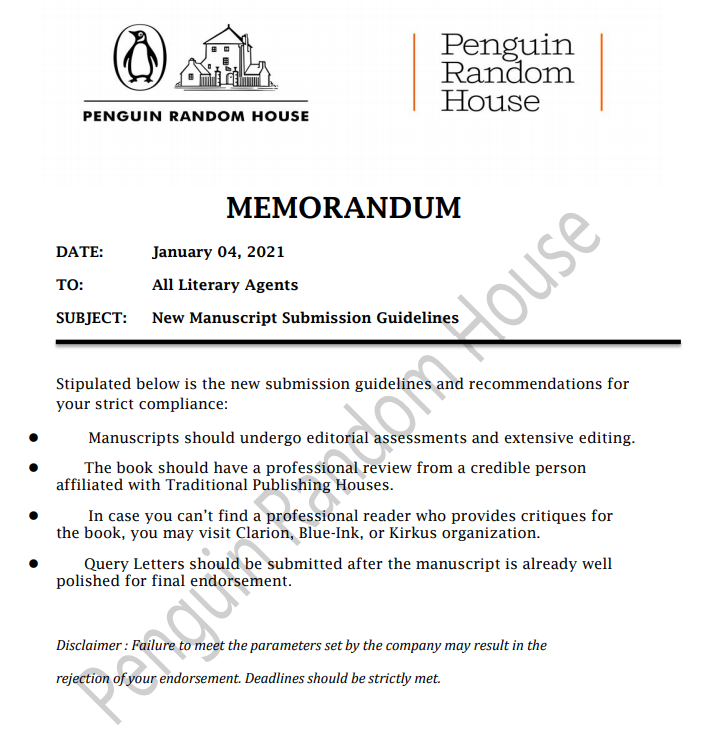