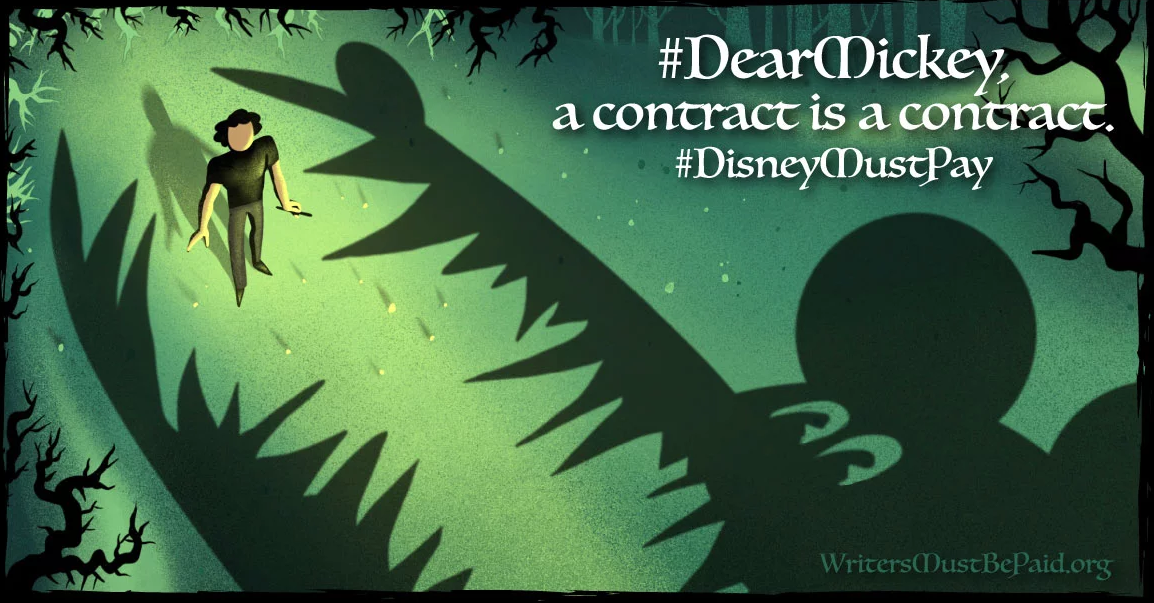 This past April, I wrote about writers’ struggles to get Disney and Disney-owned publishers to provide unpaid royalties and missing royalty statements–in some cases, going back years–and the formation of the #DisneyMustPay Joint Task Force in response.

The problem: Disney has acquired many publishers and imprints over the years, along with their properties and contracts. In many cases, however, Disney is taking the position that while they’ve purchased the rights to those properties, they haven’t acquired the corresponding obligations stipulated in the contracts…such as payment and reporting. From the Task Force website:

Creators may be missing royalty statements or checks across a wide range of properties in prose, comics, or graphic novels. This list is incomplete and based on properties for which we have verified reports of missing statements and royalties.

Drawn from multiple professional writers’ groups, the Task Force’s mission is to identify and advocate for writers who are owed money and accounting. There has been movement since April: several writers–including Alan Dean Foster, who was the first to go public–have successfully negotiated with Disney and have been paid. BOOM! Studios, which holds licenses for multiple Disney-owned comic book and graphic novel franchises, has offered to work with the Task Force to resolve royalty issues for comics writers and other creators (though to date little progress has been made). And two additional important writers’ organizations, WGA East and WGA West, have joined the Task Force.

This is just the start, though. Disney has not been pro-active in seeking out affected writers, and it has refused to post a FAQ on its website or provide procedures for resolution, leaving writers and their agents on their own to try and figure out what’s going on and whom to contact. In many cases–especially for books published years ago–writers may not even be aware that their publisher was acquired or that their books have been published in new formats or editions.

Also, while a few higher-profile novelists have been paid, several lesser-known writers and their agents are still in negotiations with Disney. And although there has been movement on the novel front, for comic book creators there have been almost no resolutions.

Accordingly, the Task Force is reaching out to all comic book and graphic novel creators who are missing royalty payments and statements from their work on Disney-owned properties. From the recent press release:

“Writers, artists, illustrators, letterers, and other artists are valued members of the creative teams that produce art and literature that is enjoyed by millions,” said Mary Robinette Kowal, Task Force Chair. “We are inviting these talented artists to share their stories and we will fight for them to receive the money that is owed to them.”…

The Task Force’s goals are to ensure that all writers and creators who are owed royalties and/or statements for their media-tie in work are identified and that Disney and other companies honor their contractual obligations to those writers and creators after acquiring the companies that originally hired them.

How can you be part of the fight?

Additionally, the Task Force strongly recommends that, regardless of whether or not you’re affected, you continue to seek timely royalty statements (when appropriate).

If you’re a fan, use the hashtag #DisneyMustPay (the Task Force suggests some sample social media messages). Blog about it. Write about it. Post the press release on your website. The Task Force asks that you not boycott, as this would disproportionately affect creators who are being paid. But getting the word out, shining a light on the issue, is hugely important. Public pressure works: Disney is taking notice, as the resolutions reached by Alan Dean Foster and others show.

In closing: this is personal for me. The late Ann Crispin–bestselling author, Writer Beware co-founder, and my dear friend and fellow scam hunter–wrote for two Disney-owned media properties, including her bestselling Han Solo Trilogy and the novelization of Alien: Resurrection.As with other affected writers, Ann’s estate has not received royalty statements and/or payments for some editions of those works.