On Sunday morning, I woke up (late, I admit) to a flurry of emails about an website I’d never heard of before: Pressfuls.

The writers who contacted me reported that they’d entered a free short story contest this past September.

As you can see, pretty minimal information. At the end of October, they received a mass email (which, curiously, cc’d all the recipients instead of bcc’ing them, so that all email addresses were visible to everyone), announcing the winner: 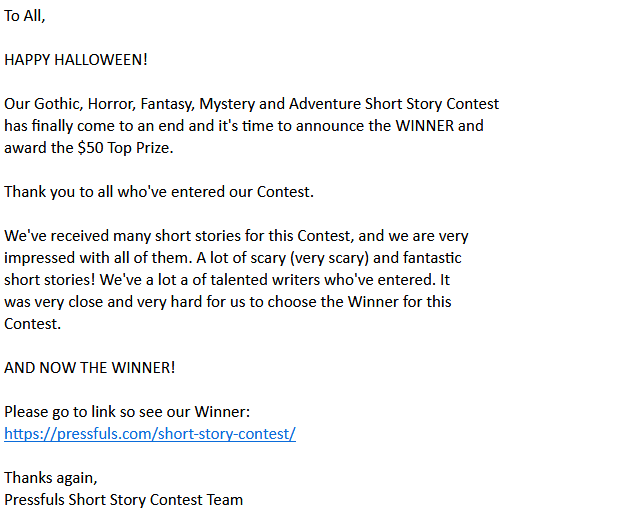 Although the contest entry info hadn’t mentioned that the winner would be published, the writers thought they were done and moved on. Some submitted their contest stories elsewhere. Some of those stories got accepted.

Then, just a few days ago, on December 19–surprise! 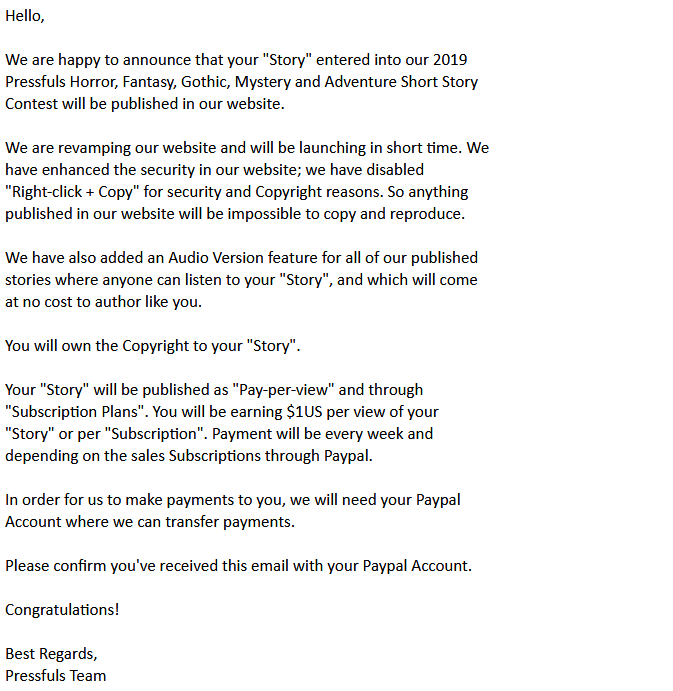 Writers were shocked. As far as they knew, they had never granted permission for their stories to be published or turned into audio versions–much less made part of some sort of pay-per-view subscription service. As for the request for PayPal information, that sounded really scammy. Writers who emailed Pressfuls to ask questions or emphasize that they hadn’t granted publication rights received a non-responsive response reiterating that their story was going to be published, and that “We will give you more details about it in short time [sic].”

So what is Pressfuls? With a web domain registered just six months ago, its current website (which writers tell me has been overhauled since the contest) presents as a short fiction subscription service, with a bizarrely large variety of paid subscription plans. There is no information whatever about staff, owners, the company, or, on the submission page, payment structure and publishing rights.

There’s also a couple of new short story contests with 2020 entry deadlines. And that brings me to my main reason for writing this post. Beyond the questionable happenings in this particular case, Pressfuls is like an archetypal object lesson on the kinds of contests you want to avoid.

– No rules or guidelines. The page for the September contest is gone, but writers who contacted me say that there were no posted rules or guidelines–and certainly there are none for the current contests. Bad contest rules are a red flag…but no rules at all is a giant, klaxon-blaring, run-away-now warning sign. Pressfuls’ attempt to monetize entries it was never authorized to publish in the first place illustrates why.

Never, never, NEVER enter a contest if you can’t find, read, and/or understand the rules.

– No information about rights or payment. Plenty of contests have unfriendly rights demands. For instance, you may have to grant publication rights simply by entering, and the contest sponsor may never release them. At least when that info is present on the sponsor’s website, you can’t say you weren’t warned. But if there’s no rights or payment information whatsoever, you are really setting yourself up for the possibility of a nasty surprise…like finding out your entry has been included in a subscription service with a sketchy payment plan.

– No information about the company. Do you seriously want to enter a contest whose organizers or sponsors you know absolutely nothing about–not even where they’re located or how long they’ve been around? I’ll give you a hint: No. If you can’t confirm who’s running the contest, don’t enter.

– No information about judges. Part of the prestige of a contest (if it has any–and most contests don’t) depends on who is doing the judging. Reputable contests disclose their judges.Otherwise, you have no guarantee the contest isn’t just pulling names out of a hat.

– English-language errors. Sure, anyone can make mistakes or typos (although you have to wonder about the professionalism of a contest sponsor that isn’t capable of proofing its own website). But if it’s an English-language contest, and you see errors or odd syntax that suggest the website has been created by people whose first language is not English, be wary. A lot of scams these days are coming from overseas. The Pressfuls website isn’t as bad as many I’ve seen, but there are enough lapses (dropped plurals, missing articles, mis-spellings–for instance, in several locations “Fantasy” is spelled “Fanstasy”) to prompt caution. (Pressfuls’ emails provide much clearer examples.)

So what is Pressfuls, really? A phishing scheme? A sleazy way to acquire and monetize content? A clueless would-be publisher with no idea how things should be done? I really can’t tell. But none of these possibilities are good ones.

A couple of the writers who contacted me told me that Pressfuls complied (though without any acknowledgment) when they demanded that their stories be taken down. However, another writer said that they tried several times and their story is still online.

Since Pressfuls has no real “contact us” option on its website, my suggestion is to send a DMCA takedown notice to its email address (shortstorycontest@pressfuls.com) or, if that yields no response, to the email address of its web host (abuse@in2net.com). You can find out more about DMCA notices (which are legal notices demanding removal of infringed material from the internet) here. SFWA offers a handy DMCA notice generator.

For more information and cautions about contests, see Writer Beware’s Contests and Awards page. I’ve also written a blog post that covers some of the same ground: Some Tips on Evaluating Writing Contests.

UPDATE 12/24/19: Since I put this post online yesterday, Pressfuls has amended the descriptions on its contests. Originally they looked like the description for the original contest (see above). Now they look like this:

This is not an improvement, since there’s still nothing about publication or rights. Also, the copyright info is ignorant on multiple levels. WGA and WGC registrations (which are primarily for screenwriters) are not legally equivalent to US copyright registration–and they don’t prove anything anyway, since the author already owns copyright, by law, as soon as the words are written down.

I shouldn’t need to say that you really want your publisher to have an accurate understanding of copyright.

Writers tell me that Pressfuls sent out another mass email with instructions on how to have content removed, so it seems they’re paying attention. We shall see.

How Predatory Companies Are Trying to Hijack Your Publisher Search, Part 3