Early in 2019, seventeen writers were recruited to participate in a box set of medical thrillers, called (with unforeseen irony) Do No Harm.

The buy-in: $750, with net income from sales going to two designated charities, and participating writers receiving a pro-rated share of any net income above those contributions. The goal: through cooperative marketing efforts, to get the set on the USA Today bestseller list.

Here’s how the opportunity was presented to potential participants (this is from an email that was shared with me):

In other words, right off the bat, authors were being primed not to expect to make money.

Helming the endeavor was a five-year-old PR company called Genius Media Inc., owned by a man called Wid Bastian (full name: Widtsoe T. Bastian). Per this long 2017 discussion on KBoards, one of Genius Media’s not-so-genius MOs was to cold-contact writers by form email and offer glowingly-described Kindle Unlimited promotions. “For you, my estimate on an eBook promo is 10,000 plus downloads and 700 plus sales, positive ROI right out of the gate and huge page read income.”

KBoards members urged caution, especially after expert analysis of Genius’s claims indicated that its promotions weren’t as successful as it advertised, and information offered by a writer who’d paid for a promo suggested that Genius was violating the TOS of the advertising platforms it used. Also noteworthy: this post from a writer who bought two promos from Genius, and lost money on each one. “That is what Genius Media told me to expect, that the first promo would not show a profit, but that by the second or third promo, they would show a profit.” (The writer bought a third promo.)

As it turns out, these concerns were a sign of things to come.

Do No Harm was published, as promised, and made the USA Today bestseller list, also as promised. On October 3 (or possibly October 4), it was unpublished–three (or possibly four) days after the contractually-stipulated end date of September 30.

Per the contract (which you can see here), final reporting and payment was due to authors “no later than December 1”. December 1 came…and went. Bastian promised anxious authors they’d get everything by December 15.

One day past that deadline, they did receive a report…but not from Genius Media. Between early December and December 16, with no notice or warning, a company called Kairos Phoenix had purportedly acquired Genius. Other than its business registration–in Wyoming, just like Genius’s–and hometown–Logan, Utah, again just like Genius’s–Kairos was a black box, with zero web presence. It had incorporated less than a month earlier, on November 22. (You can see the report here.)

That wasn’t all that was suspicious. Here’s Kairos’s financial breakdown: 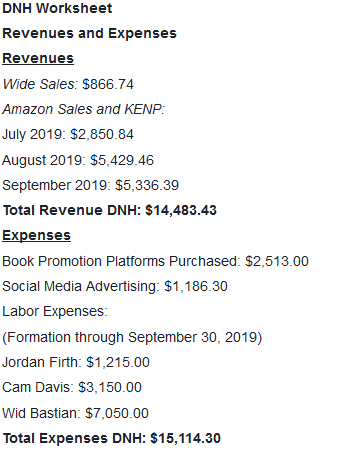 In other words, USA Today bestselling box set Do No Harm hadn’t just failed to make a profit, it had lost money. But…where was the revenue from the $750 buy-in fees–which, with 17 authors, totaled $12,750? (Kairos’s explanation: it wasn’t included because it was “ordinary income” for Genius Media. “As stated in the contract, the fee was paid to ‘participate’ in DNH Collab by the author and for no other purpose”.) Where were revenues for the days the set had been on sale past the unpublish deadline? (Kairos: “The contractual period for DNH Collab was strictly defined in the contract” as September 30, so any revenue past that date was “irrelevant”.)

Equally troubling, why were there more than $15,000 in expenses–three-quarters of which were for “labor”–when the contract stipulated that expenses were not to exceed the total of the buy-in fees? According to Kairos, this wasn’t really an expense cap: “This provision was specifically and intentionally included in the contract language to avoid the possibility of a ‘cash call’ – Genius Media asking authors to contribute more to DNH Collab to achieve the goal of making USA Today Bestseller status. No ‘cash call’ was ever made in the DNH Collab.”

Here’s the actual contract wording, though (my bolding):

For the purposes of the USA Today Bestseller Medical Thriller Author Publishing Collaborative Boxed Set program, Genius Media shall not incur any publication and promotion expenses of any nature in excess of the fees paid under the terms of its author agreements and shall have no power to obligate [redacted] or any other author for any publication and promotion expense above author fees paid whatsoever.

There’s a “cash call” prohibition and an expense cap. But Kairos wanted writers to believe otherwise, so it could inflate expenses and ensure a loss.

It was obvious to Do No Harm participants that Kairos was taking the money and running–avoiding the substantial payouts it would otherwise have to make by retroactively interpreting contract language, and also enabling Bastian himself to claim he was blameless because of Genius’s supposed takeover by an unrelated company. (No one was under any illusion that Kairos Phoenix was anything other than Bastian in a different guise.)

Authors were furious. On December 22, two of them, Christoph Fischer and Dan Alatorre, went public with their experience. Others posted warnings on Kairos’s corporate business listing.

Do No Harm isn’t the first time Bastian has run this scheme, either.

The box set in question appears to be Tales From Big Country, which was published around the same time as Do No Harm. A third set, Galaxia, was pubbed in September, with profits supposedly going to the Well Aware clean water charity. I’ve been told that Bastian is recruiting for other sets, including a collection of thrillers.

So who is Wid Bastian, a.k.a. Widtsoe T. Bastian?

His LinkedIn profile (“EXPOSE your new book to develop your author brand and sell more books!”) identifies him as the owner of Genius Media, and also of an ebook promotion program called Book Dynamite. In an earlier profile on a freelancers’ job site, he describes himself as a “published novelist and screenwriter” (more on that below) who “makes most of my daily bread as a ghostwriter.” He also has an IMDB profile, presumably because of his efforts to make a film of the life of Greek Orthodox priest Fr. Themi Adamopoulos.

Genius Media’s website has been taken offline, but traces remain in the form of cached pages, and here’s how it looked in January 2016, courtesy of the Internet Archive (more recent versions haven’t been archived). The company has a D+ rating from the BBB. Bastian also owned or was an officer with at least three other companies during the early to mid-1990s: Off & Flying, Prospex Interntaional [sic] (yes, it really was registered with a typo in the name), and Nevada Pension Investment Fund. Both Off & Flying and Prospex had their statuses “permanently revoked” a few years after incorporating. All three are long dead.

Finally…I can’t say “what goes around comes around”, since this pre-dates the ripoff that’s the subject of this post, but it certainly seems like a case of advance karma: Bastian’s own 2010 novel, Solomon’s Porch, was published by none other than Tate Publishing & Enterprises, a notorious vanity publisher that scammed thousands of authors and a multitude of staff, and whose owners pleaded guilty in 2017 to an array of felony charges very similar to the ones described in the previous paragraph.

Tate authors suffered terribly at the hands of their unscrupulous publisher, but Wid Bastian is one Tate author I can’t feel all that sorry for.

UPDATE 12/31/19: PACER was down yesterday, so I wasn’t able to do a case search. I did so this morning, and here’s what’s there for Widtsoe T. Bastian: 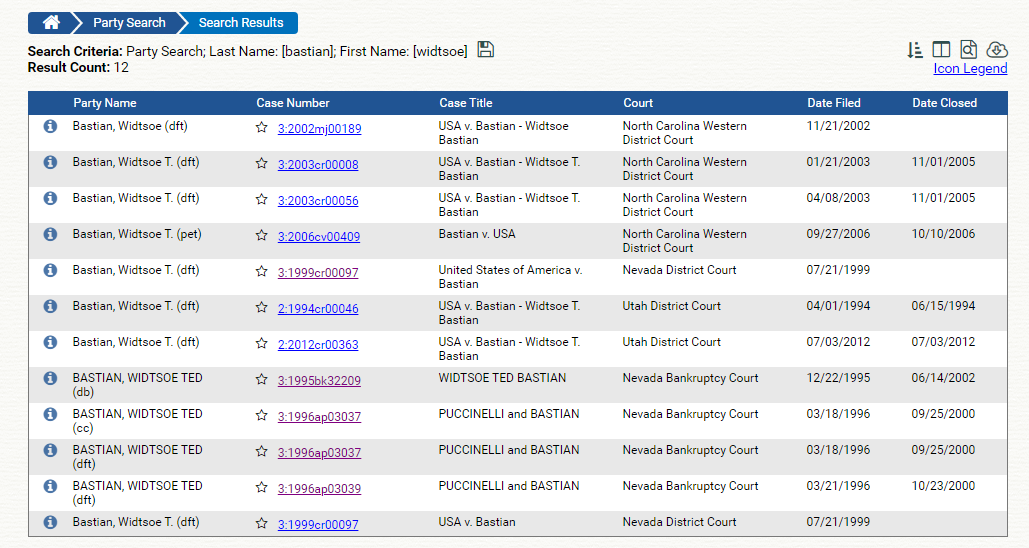 Some of the listings are redundant, and several cite court documents without any links to those documents. But there’s enough available to paint a tangled picture of a 1995 Chapter 11 bankruptcy in Nevada involving several companies in addition to the three mentioned above (the case was finally closed in 2002); a 1999 indictment in Nevada “on charges related to the operation of [Bastian’s] venture capital firm“; failure to appear in a Nevada court in 2001; and a 2002 arrest in North Carolina, leading to the plea of guilty on 13 felony counts referenced above.

In 2012, Bastian was placed on probation or supervised release, and jurisdiction over his case was transferred to US District Court for Utah. His probation ended on May 4, 2015.

UPDATE 2/21/19: I’m featuring this comment from yesterday, as it’s more indication of a pattern (the commenter has shared documentation with me that confirms what they say below):

In 2013-15, I hired Mr. Bastian as a ghost writer and later co-author of a novel we wrote together called Henry and Tom, sold through Amazon/Kindle Direct Publishing (KDP).

In mid 2015, Mr. Bastian embezzled money from a joint bank account we opened to pay for marketing campaigns for Henry and Tom. Rather than pursue embezzlement charges, I hired an expensive lawyer in Washington DC to transfer all rights for Henry and Tom to me in exchange for a $4K payment to Wid and a non-disparagement clause for both of us. This seemed at the time like the most expedient and cost effective way to deal with all the problems Mr. Bastian had caused.

I thought this matter was concluded until recently when Amazon/KDP informed me that a debt collection firm had placed a lien on Henry and Tom due to a bankruptcy filed by Wid Bastian/Genius Media Inc. KDP is currently sending my royalties to the collector per the lien. I have filed formal complaints with Attorneys General in Connecticut, New Jersey, and New York in an attempt to have the lien removed in states where the debt collectors are registered. I have also filed formal complaints against Wid and Genius Media Inc. with the Attorney General of Utah and the County Attorneys Office in Providence, Utah.

I think blogs like this are creating awareness of the depth and extent of Wid’s continuing criminal activities so we can all work together to stop him from doing this to others and get him to face justice.

You’ll note a reference to a bankruptcy. Wid Bastian filed a Chapter 7 bankruptcy petition on January 13, 2020. 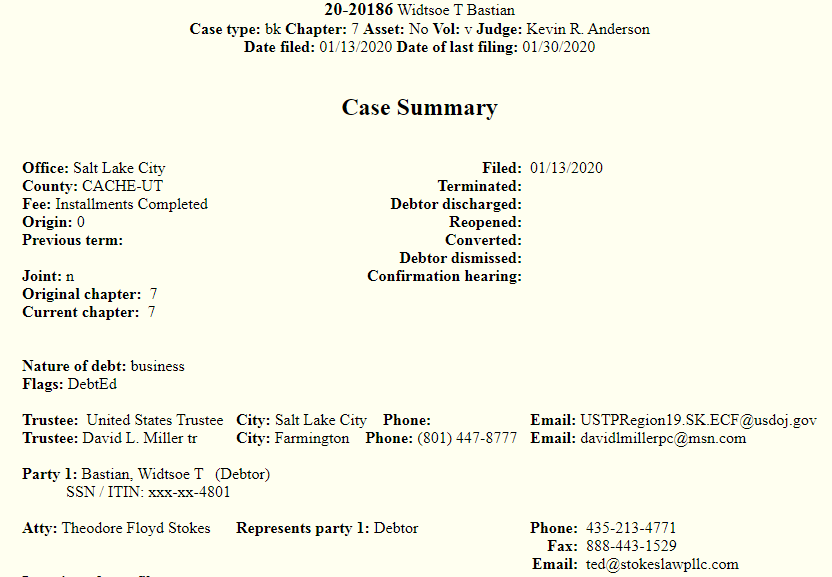 A number of victims of his box set schemes are listed as unsecured creditors; if you’re one of them, you should have received a snail mail notice, but if you haven’t, and are wondering if you’re included, here’s the Certificate of Notice, with all Bastian’s claimed creditors.

The bankruptcy filings also confirm what everybody already knew: Kairos Phoenix was Wid Bastian. The reason he set up this company probably won’t surprise you, either.

UPDATE 7/30/20: I’ve been reliably informed that the Utah Attorney General’s office has opened an investigation into writers’ most recent claims surrounding Wid Bastian and his businesses. Updates as I receive them.